It’s been a few days since the end of the Destiny beta. With the excitement dying down and the August lull ahead of us I thought I would reflect on the snippet of the game we enjoyed. To be honest, Destiny messed with my emotions; it delivered on many promises and fell short on a few. Some of the issues are no fault of its own but systems of the games it tries to mimic.

I will start by saying that I loved the game and whilst I discuss issues, they are not deal breakers and I am still excited to play the game. Obviously it’s slightly annoying that it’s £45 for a disc and £55 for a digital copy.

I will begin with the negatives. They are only small criticisms and missed opportunities.

It’s possible that he may be a scapegoat for a bad script but I am jumping on the bandwagon and saying his performance doesn’t set me a light as with other games.

I understand that its a first person shooter and that bosses are usually just bullet sponges, but Destiny really could have been smarter as it melded RPG elements into the game. Just take a look at the bosses in Zelda and Kingdom Hearts for just a couple of examples. When the first sub boss crawled out of his hole I got excited but soon realized that hiding and shooting a few times dispatched said enemy in no time at all. Similarly, the use of the term wizard confers that the game intends to use magic and mysticism but really it turns out to be a floating boss who just needs shooting like the rest. the fact they are a wizard means little and they missed a great opportunity to mix mind bending side games which could mirror that of Batman: Arkham City when the scarecrow messes with Batman or even in Watchdogs where the digital trips take you to a hell based level crawling with flaming headed demons. Both feel very different to the main game and yet have relevance in the narrative.

Spawning Enemies In The Same Spot

In Halo, the large set pieces in the single player campaign contained wars of enemies and an array of enemies in particular places. This gave the impression that the enemies existed whether the player was part of the story or not. By having ever spawning enemies pulls the player away from this narrative style and makes the enemies less part of the story and merely just grind fodder.

Doesn’t Bring Anything New To The Table

The idea of mixing Halo’s gunplay, Borderlands progression and Mass Effects Citadel sounds awesome on paper and it even works amazingly in practice but ultimately it  just mixes popular ‘been there, done that, mechanics and fails to bring something new. Despite Titanfall’s failings, the team at Respawn did manage to make the FPS feel different with the addition of walk running and the sheer speed of the game.

Maybe it’s just me but I was all ready for an adventure through space and time on a journey to save the universe. However, when you see other players sitting cross legged on a flag pole or dancing on precipices in the tower you can’t help but be removed from the narrative lessening its impact. 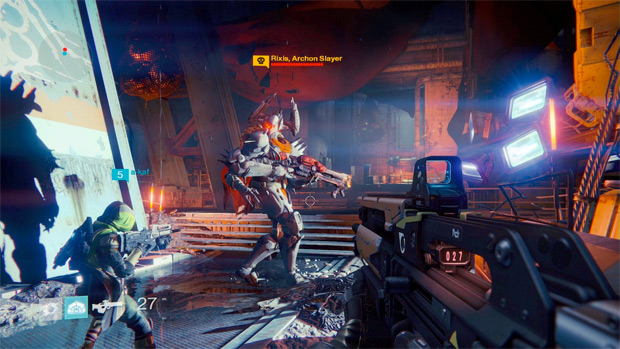 The user interface is designed around the thumb sticks perfectly and really shows a deep level of understanding. The UI designer from Halo 1-3 worked wonders considering he had not had to build a RPG focused UI before. Gun customization is easy, NPC interaction feels seamless and considered and text content is easy to use and navigate. I am really looking forward to seeing more.

There was a definite flutter of excitement every time a public match was announced. I saw other players going about their business but there was little or no interaction. However, when a public match is announced it was great to see swathes of people get stuck it. It gave me a great feeling of camaraderie and I felt the need to look out for my fellow guardians.

The Shooting Precision And Gun Variation

The shooting side definitely feels like Halo and in turn feels different to Titanfall and Call of Duty. At first it felt slow but once I found my rhythm I was able to strafe and jump like I was back playing Halo 3. The control system feels comfortable and the different weapon types each feel distinctly different. Obviously upgraded weapons don’t feel different to their previous incarnations but the fact that you can customize and upgrade your weapon gives the world a much more borderlands feel. Knowing that other players in the world will have a customized gun takes it beyond the standard weapons of Halo and throws in a handful of uncertainty.

The Story (Or Lack Of It)

You wake up dead, scavenge for an old wreck of a ship and go off into the solar system to take on an alien army known as the Darkness. The snippets of the story we were privy to sounded fantastic and it leaves so many questions unanswered that I can imagine that there will be so much lore and side stories created around the central theme. Bungie have always been great story tellers but it feels that they have stepped up their game in Destiny to encompass a huge universe of adventures.

This was hands down one of the best ‘tutorial’ levels in any game. The cinematics were fantastic with sweeping pans and amazing establishing shots. The lessons subtle and the different functions were drip fed to the player in a way that it supported the narrative and did not break character. Within a few minutes you were jumping, shooting and interacting with objects with ease. Whilst most gamers will have been familiar with the FPS setup, I felt that this introduction level made the game much more widely accessible.

Obviously, there is a lot of aspects that we don’t know about the game which could make or break it. Below are what I consider to be the biggest unknowns.

Overall, I am really excited about this title and expect to lose many hours of my life when it comes out this fall.