Minecraft is everywhere. It’s moved out of the realms of video games into books, toys and now even more video games, but what I hear from most parents is ‘I just don’t get it’. I know, because I was one of them. I have now played in excess of 100 hours of Minecraft on Xbox One and another 50+ on Minecraft Pocket Edition. Whilst this is only scratching the surface of the game, I can safely say that ‘I get it’. In its simplest form, Minecraft is digital Lego, where you have an unlimited amount of blocks and all the different block types. There is no guidance or story so it’s all your imagination as to what happens and why… it’s very cool! 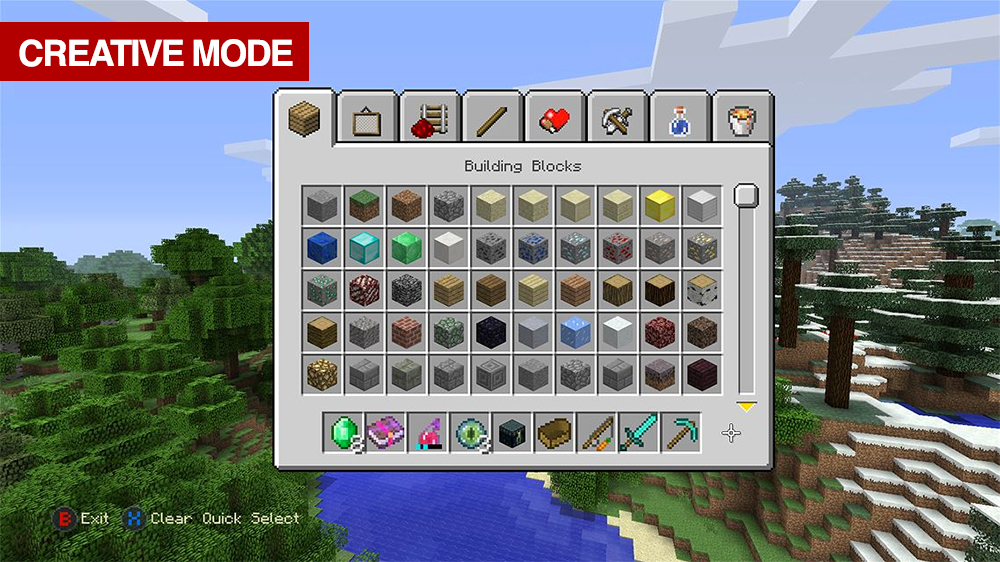 Basically, Minecraft has three modes ‘creative’, ‘survival’ and Adventure. Creative mode is just like digital Lego as you are given an array of block types that includes building blocks such as dirt, stone, and wood. creators also can use blocks such as water, rail tracks, windows, stairs, ladders and fences. Then there is the accessories that might include torches, chests, plant pots, flowers, and picture frames. Finally, there are the weapons and tools which include pickaxes, regular axes, swords, shovels, bows and fishing rods. All of which and more can be used to craft anything from a garden shed to a castle complete with a water slide and roller coaster. The only limit is your imagination. For me, it was like having both an unlimited collection of Lego as well as having a never-ending train set. The world is generated when you first start the game and can include various ‘biomes’ that include forest, desert, aquatic, grassland and tundra. All have hidden caves, mines and temples to discover. Discovering these is incredibly exciting. From the second you breakthrough into one of the chasms you feel like you have opened a treasure trove of adventure. Inside there might be mines, monsters and precious metals. Caves are more exciting in survival mode as you need only have limited resources and do not have access to everything in creative mode. The good thing about creative mode (for parents) is that the monsters can’t hurt you. 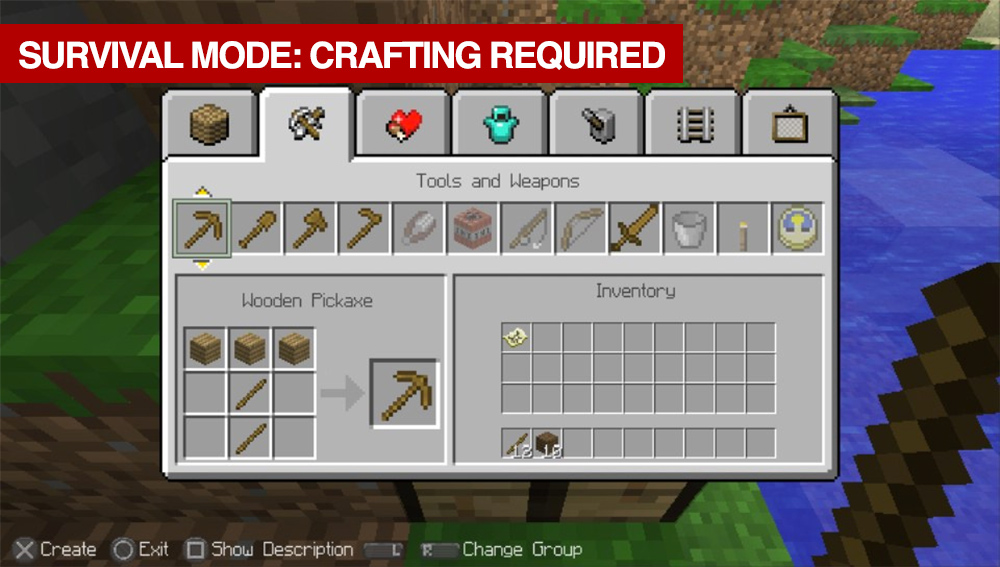 The survival mode is more of a game than a toy box. You start with nothing and have to build your world from nothing. You begin by collecting wood from trees, wool from sheep and digging up dirt from the ground. From there you can build a bed, a shovel and basic weapon and create your first home. I have compiled a beginner’s guide to Minecraft here for more details. In survival mode, the monsters not only can hurt you, but also actively look for you, so building your first home is a must. As most monsters come out at night you can sleep through the first few nights until you have a small Arsenal of weapons or you have created a small tunnel network. The beauty of survival mode is that everything is earned. You can’t have diamond armour until you have enough diamond ore to make it, which means you have t work your way through, wood and iron first. Your home, your tunnel network, your mine tracks and everything you create in survival mode is all down to you working hard at the game. This takes time, a lot of time. Should you ever want to speed up your progress, you can use the options menu to switch from survival mode to creative mode at any point.

Finally, you have adventure mode, in which you can’t place blocks or destroy blocks (unless you have the correct tool). You can still trade with villagers, find chests, hit animals, but it’s more about playing a traditional style game. You can create levels in creative mode and then switch to adventure mode to play games such as parkour levels or the hunger games, which I will go into later on.

The Monsters of Minecraft

The important thing to note is that when an enemy hits you there are no screams, blood, or gore, just the sound of a thump. Zombies, spiders and wolves just hit you, whilst skeletons and witches have projectiles. Endermen are generally passive unless you get too close or stare directly at them. When the player attacks enemies there is a similar thud but they do moan and yelp when killed. 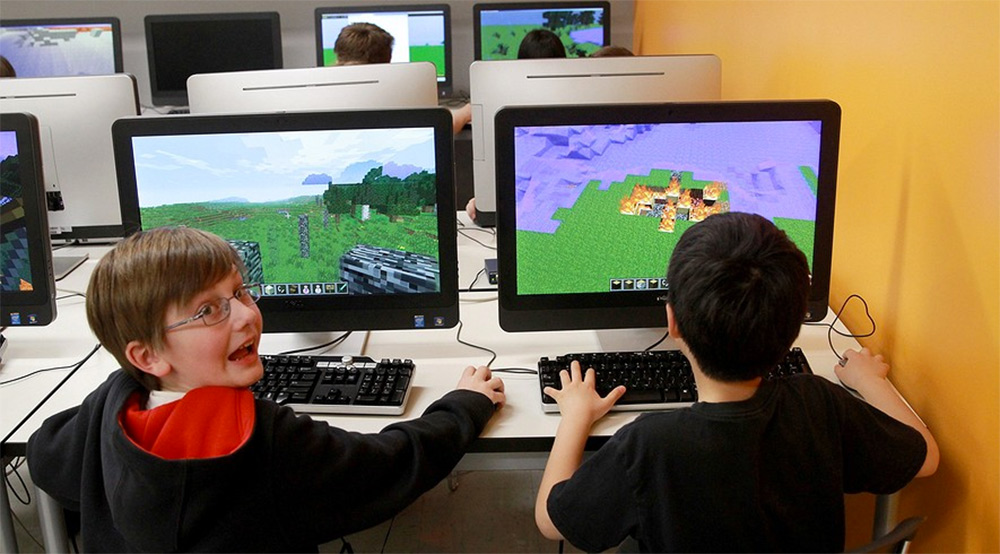 I thought it was useful to highlight how to manage a Minecraft addict. If you want to be involved with their game there are a few things you can do.

There are Various Skin Packs

Skin packs are paid-for themes that change the look of the various blocks. Instead of having the standard pixel style look, you can change it to plastic-looking blocks, sci-fi themed, Halloween etc. All of these changes the look of the entire world and come with additional character skins so your player can look like a spaceman or even Father Christmas.

Ask them to build you a room in their house, your own house or even a small farm.

Give Them a Time Frame

Building exquisite structures or exploring deep caverns in Minecraft takes time, but it can be saved at any point. Give players a timeframe so they can manage what they are doing. If they are building, let them finish a wall or floor (but not the building) and if they are mid-adventure ask them to get to a safe spot to save.

It’s Up To Four Players! Why not join in with the fun and use the second controller to build something with your child or even be the partner on an exploration?

The Hunger Games More advanced players that tire of the regular game modes can play an event called The Hunger Games which is a player vs player battle around custom arenas.

So there you have it, you’re the first step into a much larger digital world.

Explain Minecraft to me.

Minecraft is a popular video game that allows players to explore, build, and create in a virtual world made up of blocks. It was originally developed by Markus Persson and released by Mojang Studios in 2011.

In Minecraft, players are free to roam around a vast, procedurally generated world made up of a variety of different environments, including forests, caves, deserts, and more. As they explore the world, players can collect resources such as wood, stone, and other materials, which they can then use to craft and build structures and other objects.

One of the key features of Minecraft is its open-ended gameplay, which allows players to play in a variety of different ways. Some players may choose to focus on exploration, discovering new areas and uncovering secrets hidden within the game world. Others may prefer to build and create, using the resources they collect to construct elaborate structures and designs.

Minecraft also includes a variety of different game modes, including survival mode, creative mode, and multiplayer mode. In survival mode, players must gather resources, build shelter, and defend themselves against hostile creatures such as zombies and skeletons. In creative mode, players have access to unlimited resources and can build and create without any restrictions. Multiplayer mode allows players to join servers and play with others online.

Overall, Minecraft is a game that encourages creativity, exploration, and problem-solving. It has a large and dedicated player base, and it has inspired numerous spin-off games and media, including Minecraft: Dungeons, Minecraft Earth, and the Minecraft: Story Mode narrative adventure game.

What are some beginner tips for Minecraft? 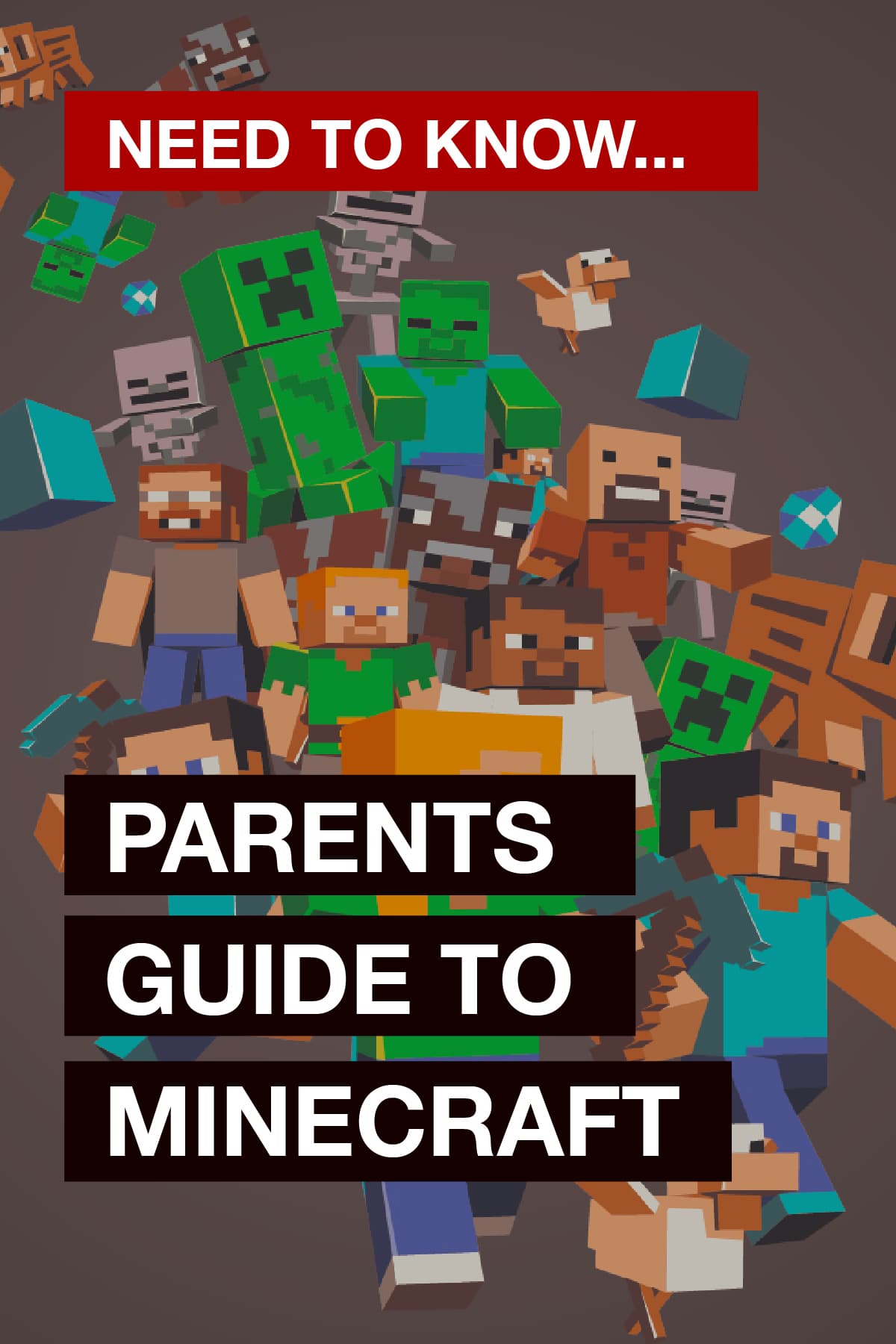 Summary
Article Name
Parents Guide to Minecraft
Description
Minecraft is everywhere, but what I hear from most parents is 'I just don't get it'. I know because I was one of them. Here is my simple guide for parents.
Author
Ian Garstang
Related ItemsAdventure modebooksbuilding blockscreative modedigital LegofeaturefeaturedimaginationMinecraftmost readparentspopularsurvival modetoysvideo games