Doom is back with a heart crushing, eyeball popping, head stomping return to form. It has taken me a while to finally finish the campaign, but that doesn’t mean it wasn’t a fun filled rollercoaster from start to finish.

So lets delve into the darkest pits of hell as I share my review of ID’s latest outing on Xbox One. 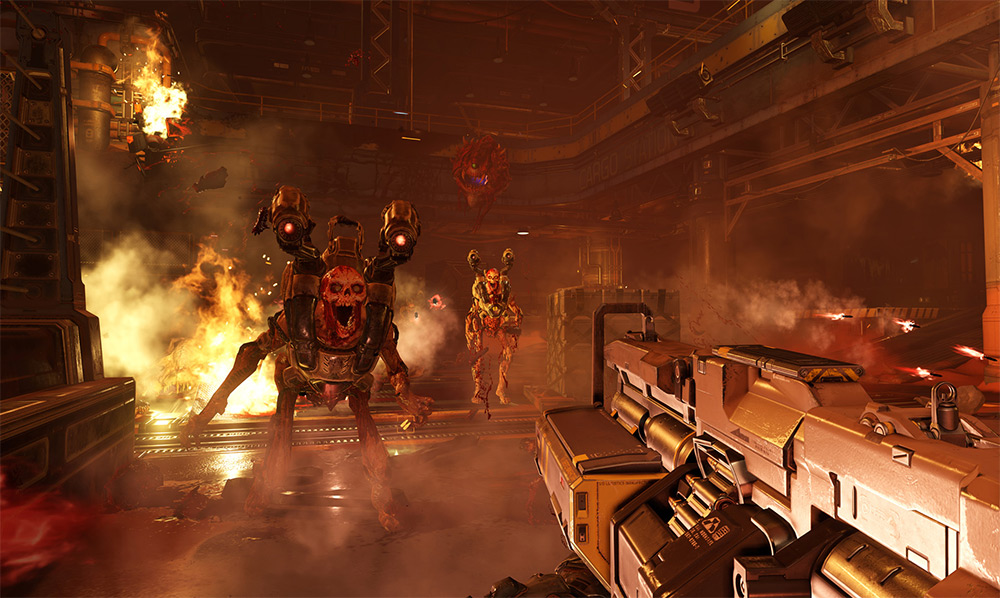 The story in Doom is essentially a reboot of the original, you play a marine who wakes up in a research base on Mars after a horrific accident has left most of the staff dead and the left overs into hells minions. The base was looking to harness energy from Hell itself. As you might expect, a sadistic cult, led by a maniacal augmented scientist, opened a portal to Hell and… well all hell broke loose.

The hand-held opening level doesn’t last long and you will soon find yourself blasting hell spawn with an array of weapons that include a pistol, shotguns, machine guns, pulse rifles, lasers and rocket launchers and you will need each an every gun to beat back the ensuing horde. The action is fast and furious with a multitude of monsters being thrown at you at various set-pieces similar to Halo. The breakneck speed of these action sequences is broken up with quieter platforming sections which is quite jarring but does give you time to take in the stunning graphics, eerie soundscape and beautifully crafted animations. If you need a second to think mid-action, then the glory kills allow you to slow everything down as you rip off limbs, force-feed beating hearts and generally mame your enemy in gloriously gory fashions. 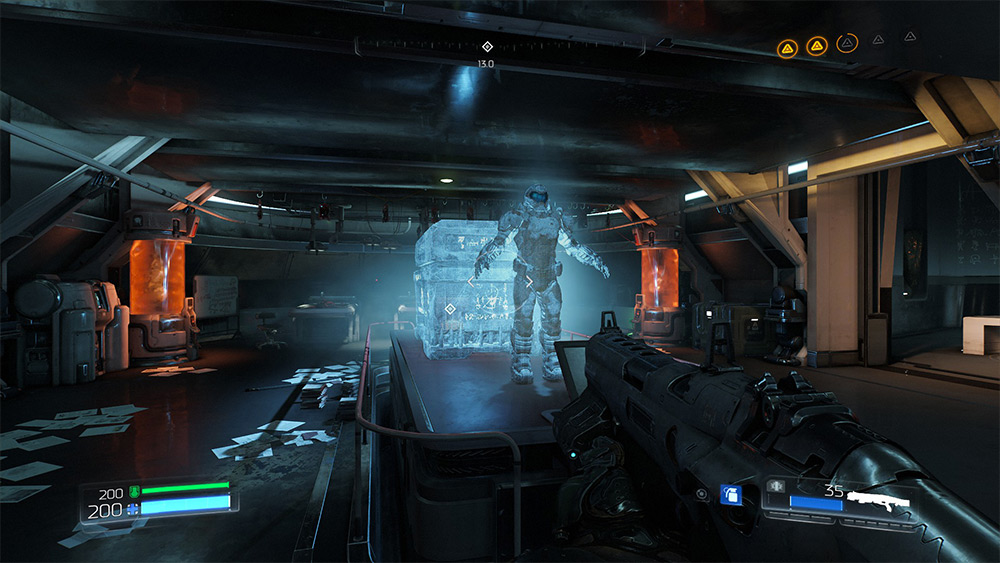 The single player campaign lasts around 15-20 hours depending on how many secrets you want to find or alternate routes you want to explore. However, green lights pave the way through the game and the frantic set pieces and epic boss battles are fantastic. The game will appeal to fans of the franchise and new players alike.

Once you have cut your teeth on the single player game the game is further expanded with the multiplayer and snap map sections.

The multiplayer is famed for moving at breakneck speed and the new arrival doesn’t disappoint. The early matches prepare you a little, but once you past level five, the gloves come off and using the slew of mods and additions everything goes turbo. Players are customisable to a certain extend, but the most fun is when you become a demon and you can rip through the apposing team like a chainsaw through loose flesh. 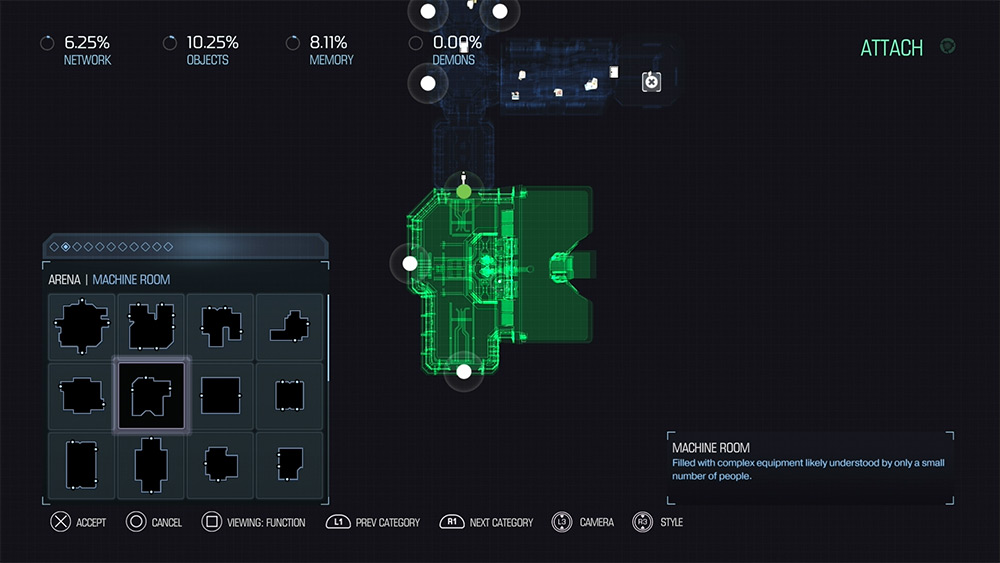 The snap map side of the game is a whole pandoras box of goodies opening up a whole world of community content and featured maps. There are box single player and multi-player experiences to enjoys from the classic Doom maps to homages to games such as Destiny. Should you want to delve into the creative side yourself, the map builder is easy to start with but has layers to depth should you want to create a gaming masterpiece.

Doom had high hopes but low expectations when it was announced and I am extremely happy to have been blown out of the water by the sheer size and scale of the game. The single player is a no-nonsense shoot-em up that is fun to play despite the slower platforming sections and the multiplayer and map creator give the game a longevity not seen since GTA 5. If you have been sitting on the fence on this one so far, take a leap of faith and give into temptation. Dive into the pits of hell and bust some skulls as Doom is back is vengeance. 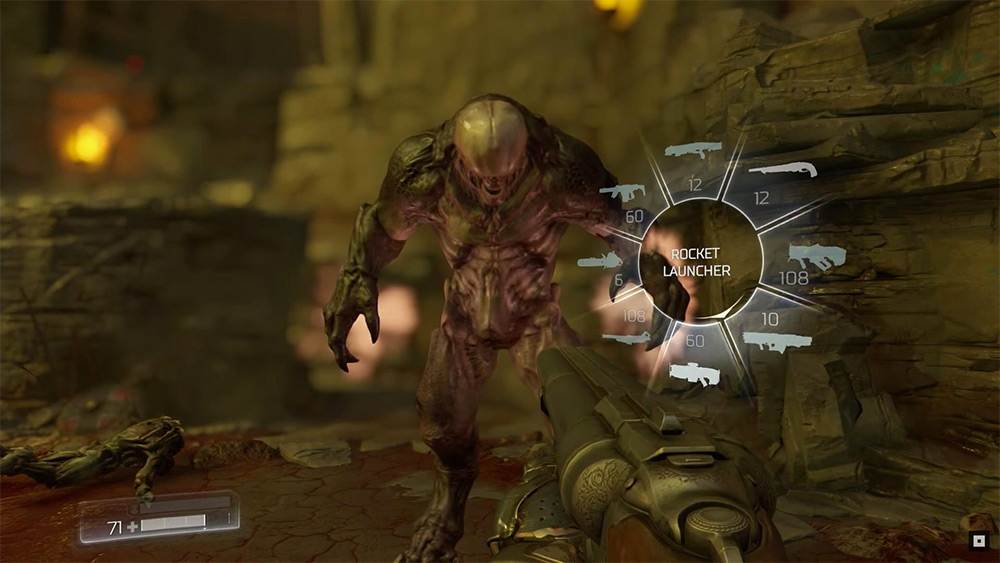