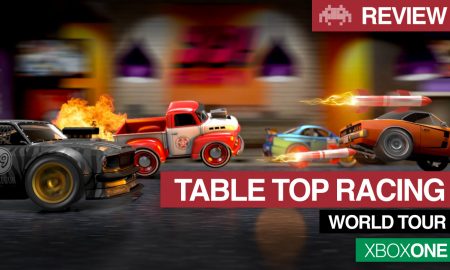 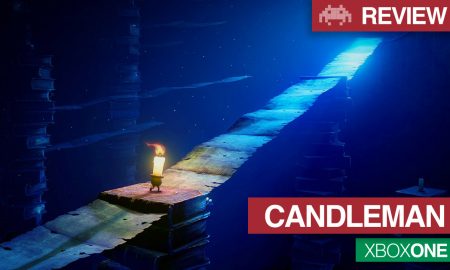 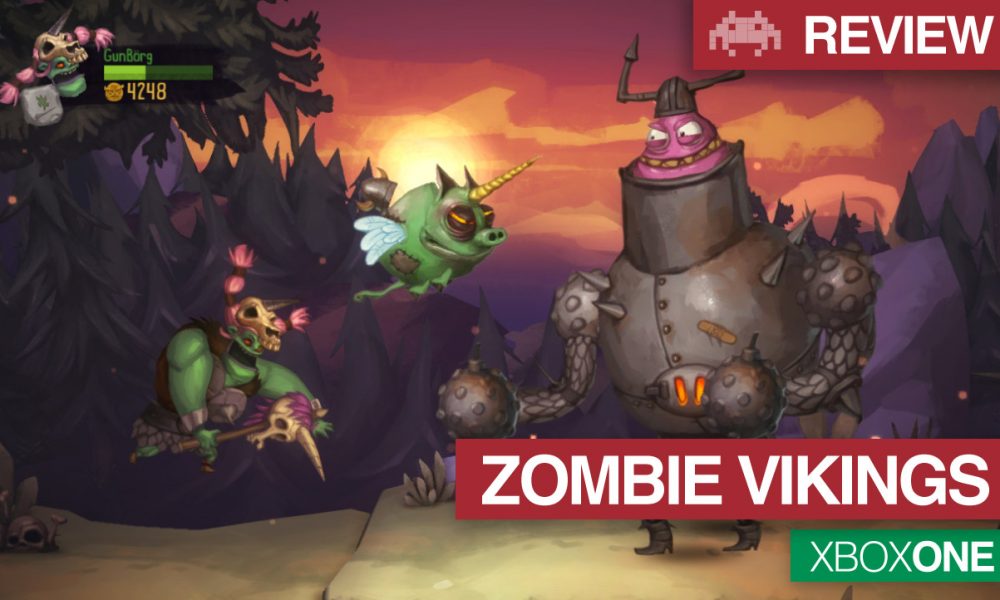 Adding a sense of humour to a video game is always difficult. Some use clever dialogue, some use slapstick and others just go for just plain stupid, so when the maddening crowd of Nordic villagers trapped me in a pit and shouting ‘bring out the fish poop cannon!’ I knew just what level I was dealing with and to be honest, my inner child thought it was hilarious. However, Zombie Vikings wasn’t without its disappointments.I was mentally torn when I originally saw Zombie Vikings on the Xbox Store, firstly, I really wanted it due to the fact I really enjoyed Zoink’s last game ‘stick it to the man’. It’s visual style and sense of 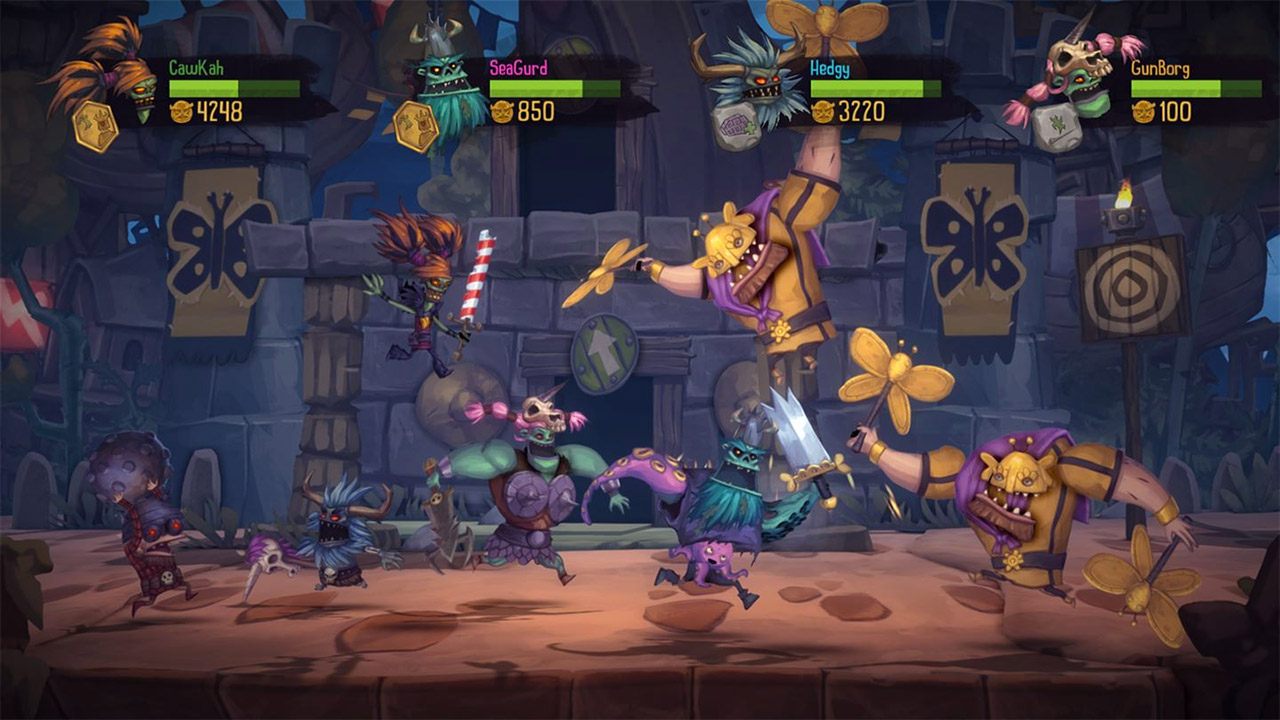 I was mentally torn when I originally saw Zombie Vikings on the Xbox Store, firstly, I really wanted it due to the fact I really enjoyed Zoink’s last game ‘stick it to the man’. It’s visual style and sense of humour both impressed and tickled me no end. So when I saw that it was the same art style I was eager to get stuck in, even if it was a retro inspired scrolling beat-em-up, similar to streets of rage or castle crashers. The fact it was pushing the four player option did put me off somewhat as I didn’t have any friends to play with so I was worried it would be a slog to get through the campaign. This fact also meant I couldn’t review it from a co-op gaming point of view, which is how the developer intended it to be played. 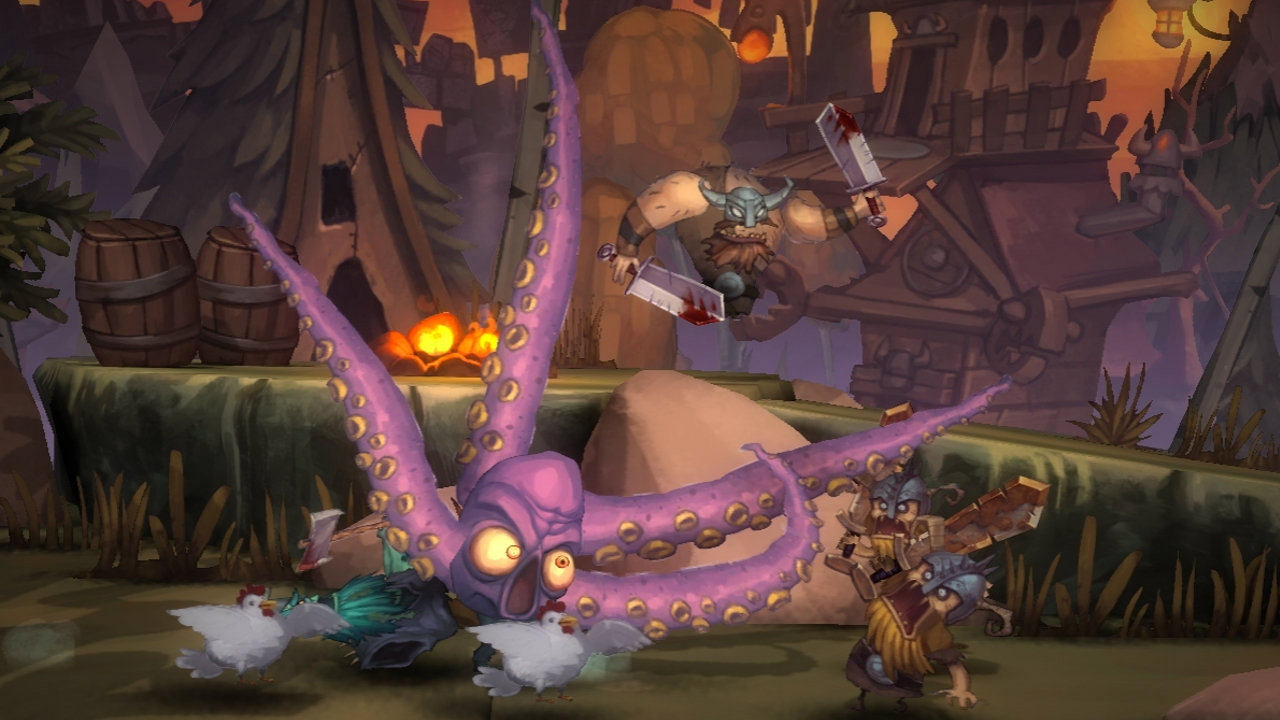 The visuals are the first thing to pop as the hand painted art style is simply beautiful. The Nordic characters ooze charm and from the outset you have four undead heroes choose from

All of the characters have an array of attacks including two special attacks that need to be powered up before unleashing. Throughout the game, you will unlock additional characters and a slew of comedy weapons from a replica of Thor’s Hammer to blunt fish trauma that is a hammerhead shark sword.

The story follows the quest of our undead heroes resurrected by Odin to retrieve his missing eye that was stolen by all to cheeky Loki. As Loki hides out among the various levels he convinces the locals to fight in his corner meaning you will hack and slash through a multitude of enemies. Each stage has the usual small, medium and heavy enemy types which come in seemingly predictable waves. Whilst they all look amazing, they do become tiresome after 20 levels or so. 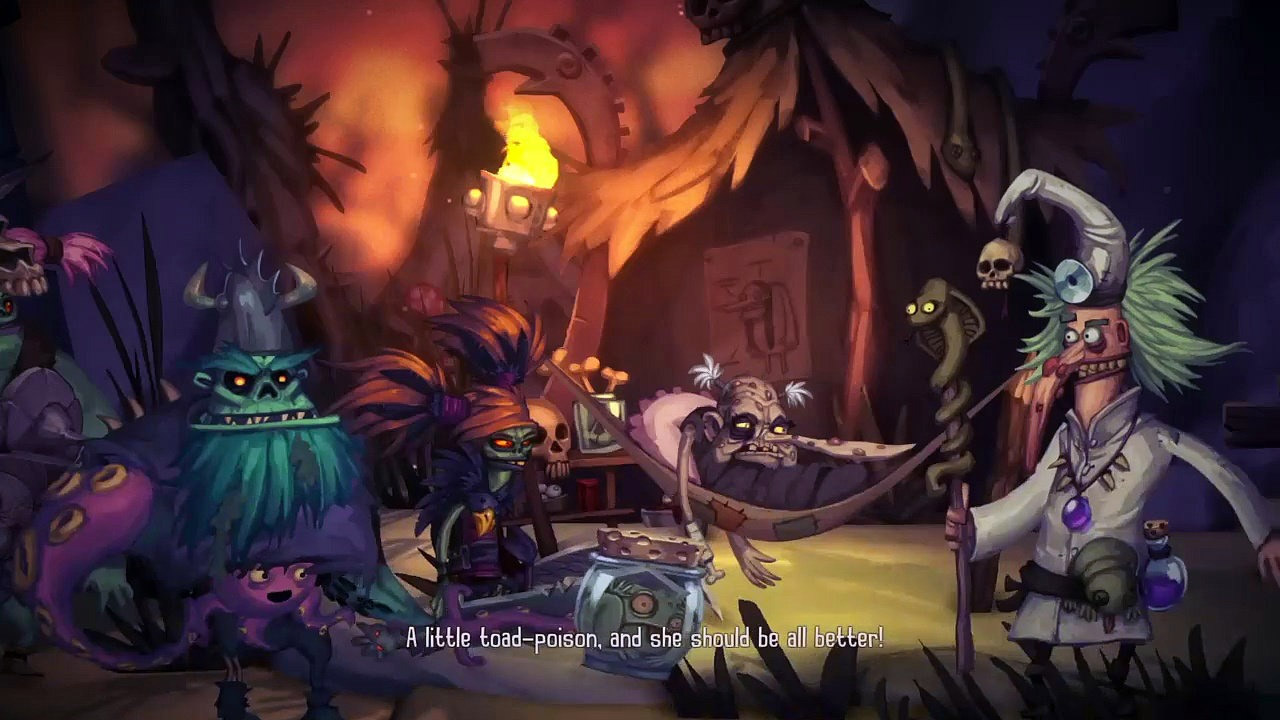 The background enjoys a similar visual treat with various non-interactive characters fishing, waving and generally lolling about, but as they are not animated, it feels a little unconsidered.

However, the end bosses easily made up for this as these big, bold and completely mad bosses are a welcome break from the button mashing main game. Similar distractions come in the form of a Soccer style game and a multiplayer game. The multiplayer is fun for battling it out with friends for a while, but it’s the main game that will set you back a good 8 hours to beat. 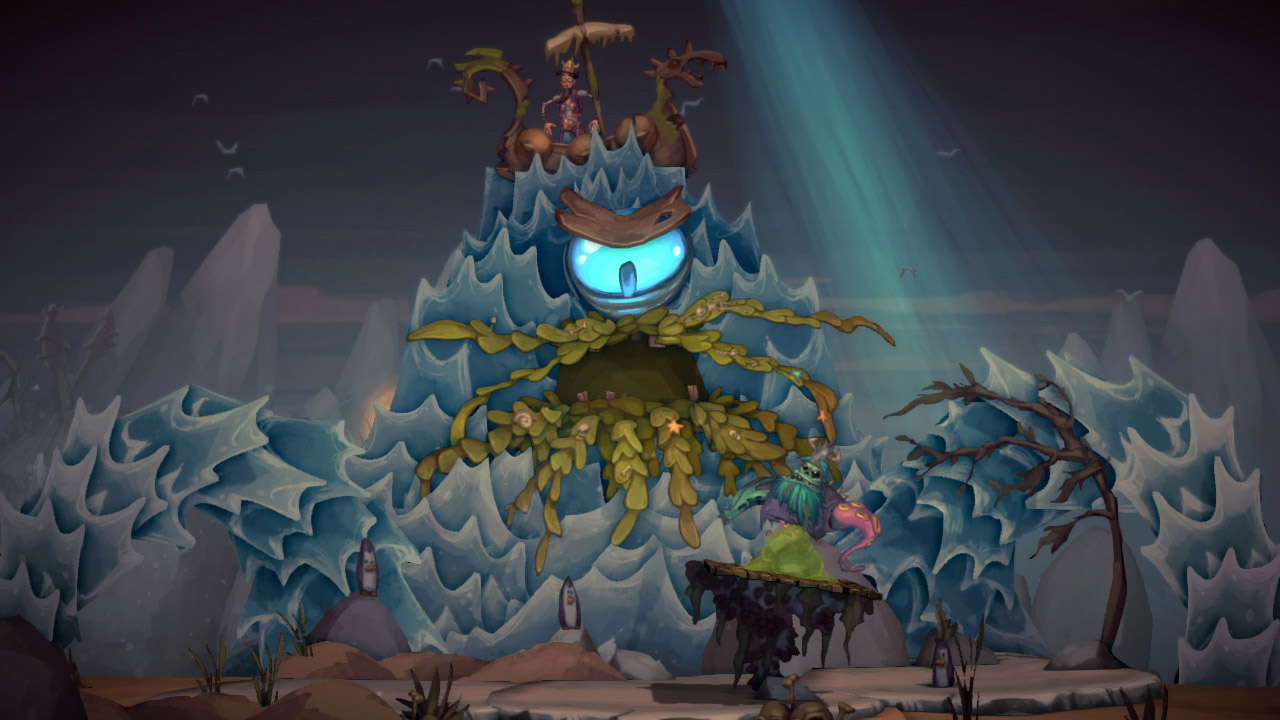 Overall, Zoink has created another beautiful looking beat em up with a well-told story, colourful characters and laugh out loud moment. Sadly, the repetitive gameplay is not built upon in later levels despite the varied bosses, amusing side quests and a plethora of weapons and magical runes. Thanks to Zombie Vikings coming to Xbox One last we get the fully patched version on launch as the PC version was marred at launch due to a number of bugs. Whilst I didn’t enjoy Zombie Vikings as much as Stick it to the Man, I am still excited to play Flipping Death which was announced a few weeks ago.

Fans of Castle Crashers or the classic beat-em-up will definitely enjoy Zombie Vikings and should check it out. 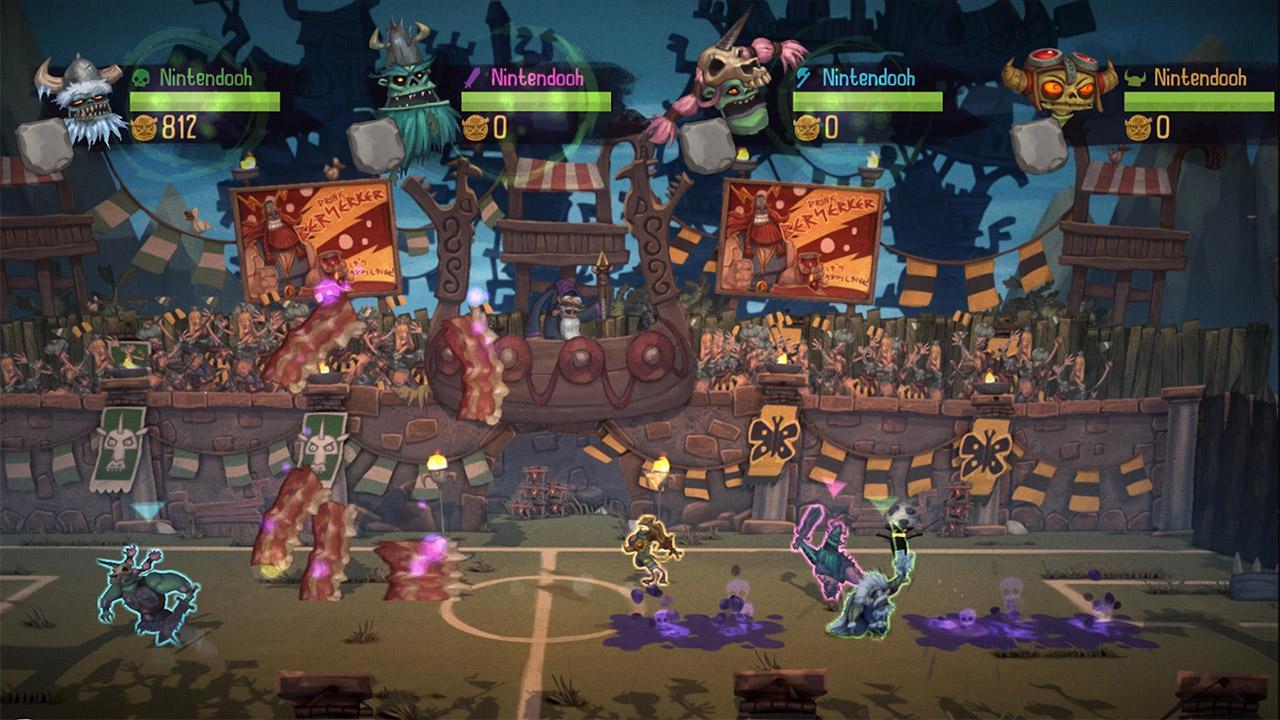