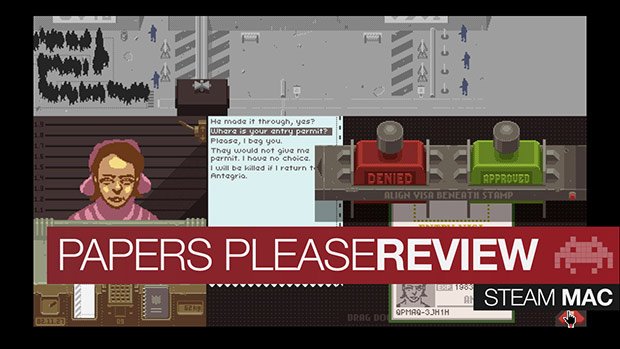 Papers Please looks like it could have been out on the ZX spectrum back in the 80’s. However, don’t let its retro styling put you off, as underneath its 8bit graphics lies a game experience that will surprise you.

The premise if the game is simple; you work for passport control for Arstotzka, an invented eastern block style communist country. Following the end of a 6 year war with neighboring Kolechia, the borders are now in place and marshaled vigilantly. The aim of the game is simple, only allow people into the country who have the correct paperwork. Sounds easy right? The more people approved for entry ‘correctly’ the better your pay packet and you will need a decent wage, if you are look after your large family, who we talk about later. 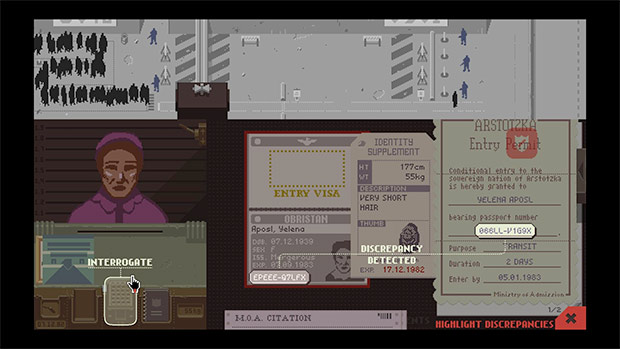 In order to correctly process a person for entry into Arstotzka they must first have a passport. The game starts easily enough. But then it gets steadily more difficult. Next it might be only people from certain countries can get in, then there might be discrepancies between their passport and their physical appearance (such as height or gender). Given enough time you could find every error but sadly time is limited so you must quickly race through the checks trying not to make a mistake. Should an error be found then your will get a warning and after three such warnings you are fired. Worse still is that some people are actually terrorists and the ones you let through (and even some you don’t) will bomb the terminal meaning you have to be ready to sound the alert if you spot a ‘runner’. 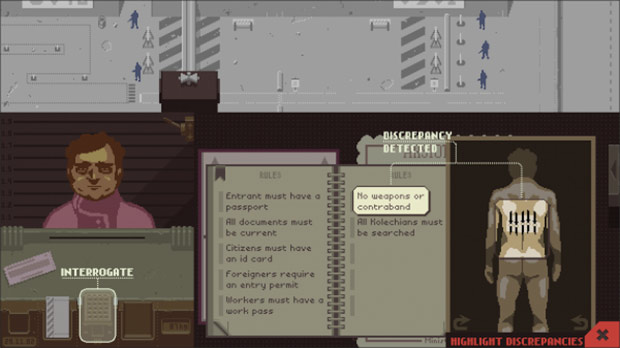 The game has layer upon layer of depth adding additional obstructions from simple entry tickets to accompany a passport, to moral bending NPC interactions. You will find yourself having to make life changing decisions for people as entire families come through but with a mother who’s papers are not in order, prostitutes who are trying to escape their pimps, spies, smugglers and even people traffickers. And finally, to top it all off, your own good-for-nothing family are a constant drain on your earnings, buying food and getting ill. The player has to balance the speed at which you allow entry, with your own morals and family responsibility. All of which are heavy concepts for a game that wouldn’t look out of place on a Commodore 64. Outside of it’s month long story mode the game switches to an endless mode which will keep hardcore fans busy but lose many players. 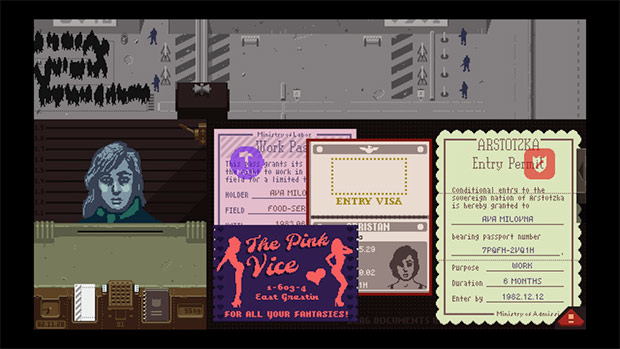 Overall, this game is strangely enjoyable and worthy of it notoriety. Even though the very thought of stamping passports all day sounds desperately boring, when it it mixed up with communism and a cold war mentality, it become unusually intriguing and even fun. Papers Please seem to encapsulate the isolation of a immigration inspector whilst playing with your moral compass. You will slowly be driven to do your job more efficiently, even if this means turning your back on innocent members of society and you will be constantly trying to justify your decisions and follow orders in order to feed and care for your family.