I will keep this short, as i’m sure you have either played the game or seen many other reviews. My look at Star Wars Battlefront comes months after release, so I understand I have missed the speeder on this one. This is the story of my journey to discover and own Han Solo’s blaster, the DL-44. This fabled pistol only becomes available at level 25 and was to be my goal before reviewing the game. Now, blaster in hand I now tell you my tale in the medium of review! I was one of the few who had to wait till Christmas to play Star Wars. I usually buy my games as and when, but someone had decided to get them for Christmas, instantly holding me back from a day-one purchase. I played the beta, so I had some idea of what to expect. 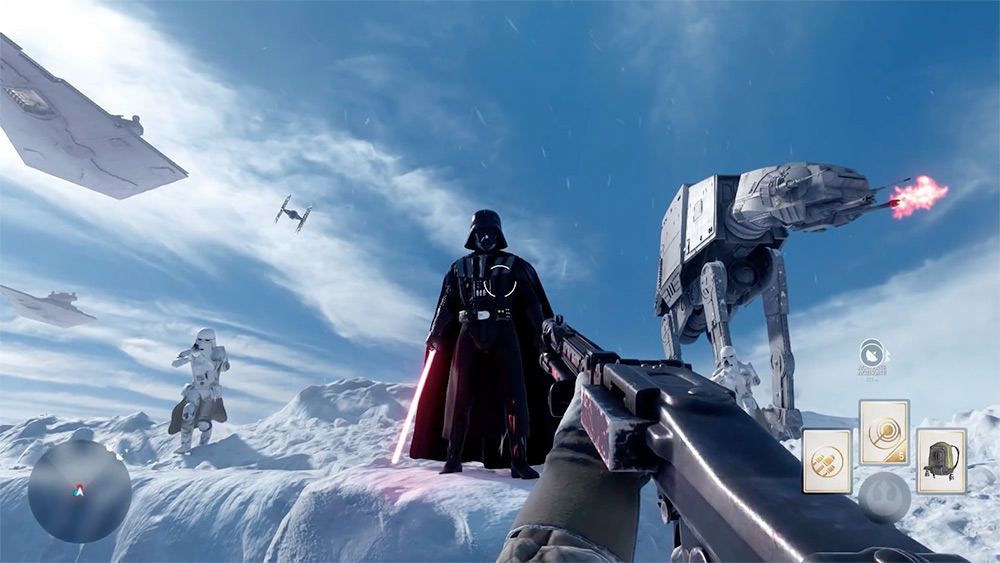 The full game is just beautiful to look at, with graphics plucked from the very imagination of George Lucas himself. The sandy banks of Jakku, ice plains of Hoth, lush forests of Endor and bubbling tar pits of Solace all look wonderful and resurrected my inner child, obsessed with Star Wars. The soundscape is all taken from the extensive library at Skywalker Sound with every engine hum, blaster sound, and musical interlude so authentic it’s like the cantina band is in your living room. Games are played from either first-person or third-person perspectives, of which I was a fan of the former. Aiming is slightly cumbersome but generally forgiving. It can be a little frustrating at some points, as those with explosive shots, or generally, more powerful guns take you out despite you landing many more shots on them first. This leads me on to my quest. I got the standard E-11 Blaster, and whilst it served me well for over 100 games, I was playing to get to level 25. Too many times I found myself getting killed by a single shot and as my highlighted killer returns to the battlefield, I can see his weapon of choice… the DL-44 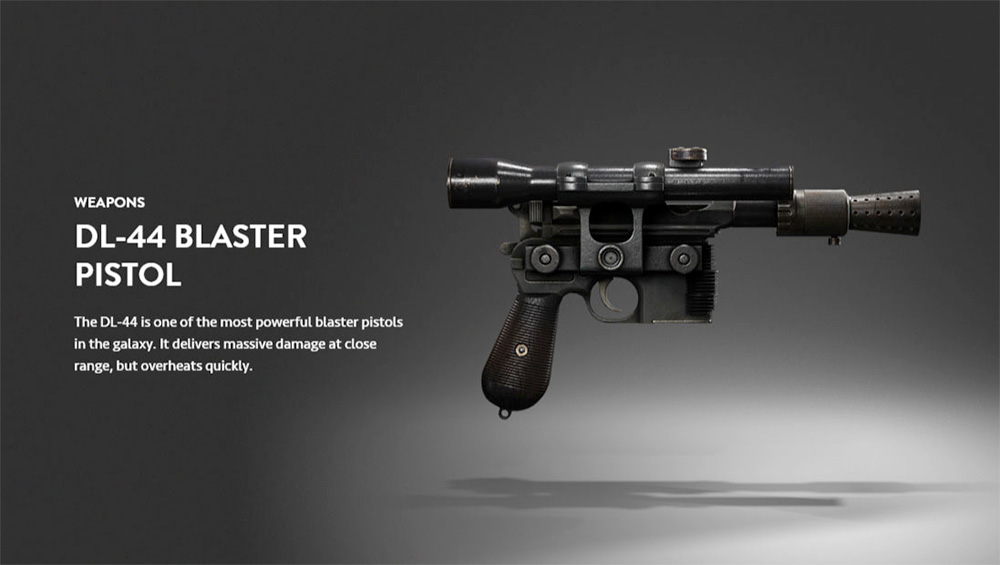 My journey took me through all 10 different game types which I have outlined below:

A massive 40-player skirmish on the battle-scarred landscape of Jakku is shown in Star Wars: The Force Awakens. Teams fight for various key points to drive the enemy back. It’s big, its epic and easily one of the best maps in the game.

Similar to Turning point, but played on all the other big maps in Star Wars Battlefront. Players can use both ground and air vehicles in order to secure victory for your team.

A classic Team Deathmatch mode that is like a hot cup of cocoa and a blanket, it’s warm, comfortable and easy to go back to.

It’s capture the flag with a Star Wars twist… that’s no flag… it’s a droid. Yay!

Another epic 40-player battle to either destroy or protect the Empire’s giant AT-AT’s. Frantic fun with lots of objectives.

Drop Zone provides exciting 8v8 matches as you struggle to secure and protect falling escape pods in an array of different maps.

Players can take to the skies and dogfight in some of the most iconic Star Wars vehicles including X-wings, TIE fighters, the Millennium Falcon and more.

A thrilling tug-of-war experience for fans of Star Wars and capture the flag gameplay. Cargo challenges your team to capture valuable cargo boxes from the opposing team. Get the loot and make your way back to your base – but don’t forget to defend your own precious cargo as each capture counts.

The most valiant Heroes and cunning Villains of the galaxy are clashing in this epic Star Wars Battlefront mode. Luke Skywalker, Darth Vader, Boba Fett, and other iconic characters will be part of your team together with ground troopers. Keep your Heroes and Villains alive to score points and win the battle.

Seven Imperials against Luke Skywalker? Seven Rebels battling it out against Boba Fett? In Hero Hunt, one player will experience the thrill of playing as an iconic Star Wars Battlefront Hero or Villain, facing off against ground troops from the opposing faction. Want to play as the Hero? Take them out and you’ll get your chance, but remember, once you become the Hero the hunt is on. 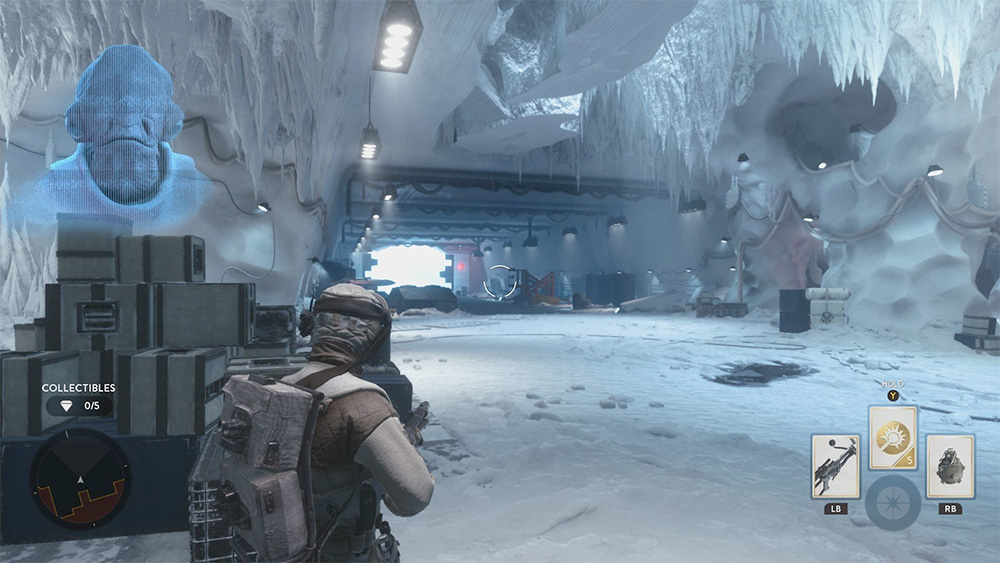 The lion’s share of my game time was spent on the Turning Point mode and Blast, as I easily lost 30 hours playing it and would happily pick it up again tonight. However, as my fellow reviewers have stated, the game lacks any depth. The lack of any story mode is the first issue, as it has plenty of source material. Secondly, the upgrade and progression felt useless. Weapons and powers could be upgraded once, which basically reduced the cooldown time and the slew of beards and haircuts to unlock felt a waste of money. Different emotes could also be bought but again don’t really add to the overall experience. They seem to be simple, something to do whilst waiting for a game to begin. Should you get past level 50 you can unlock shadow troopers and unlock a handful of additional species which are a little more exciting, but only available for those who play the 200+ games to get there. 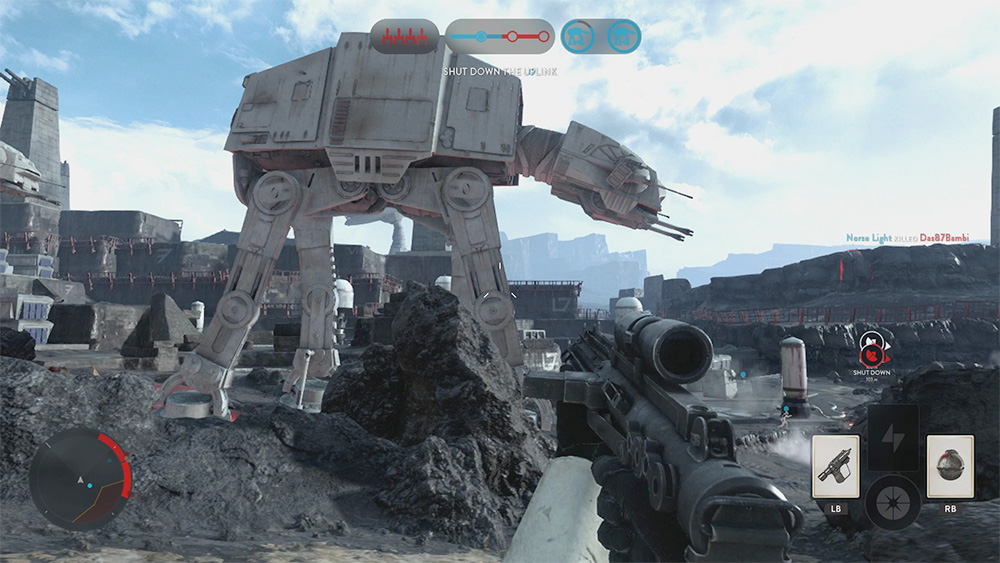 Don’t get me wrong, I think the game is great. I understand that it is aimed at a younger market and there is still a number of unnamed DLC packs still to come, BUT despite the lovely graphics, amazing sound and even solid gameplay, you do feel a little cheated as you learn the best spots on the maps and then go through the motions of killing and being killed. Many are suggesting that there will be a Battlefront 2 to coincide with the second or third new star wars movie, but I hope that this is just the initial skeleton and that once all the DLC has been released it will feel more like a well-rounded game. Obviously, this will anger me and other reviews as it should have been complete, to begin with but let’s hope it gets there eventually. After the first season pass has been released I expect we will see additional passes appear later to build on the core game. However, that is the future.

Overall, the game is fun to play and beautiful to look at, but after the initial 10-20 hours it eventually gets repetitive with little in the way of progression. Whilst the guns choices are good, the beards, haircuts and nationalities feel like cheap add on’s. It’s well worth a play and you will undoubtedly lose many hours lost in a nostalgic child-like dream. Eventually, you’ll be rudely awakened when you realise there is very little to spend your hard-earned credits on, all of the good stuff is only for those willing to play 150 games and the diorama fills up so slowly you’ll forget its there. When I finally hit level 25 and got the fabled DL44, I was both happy and relieved, as I reached my goal and my new blaster kicked ass. However, now I either have to work my way to level 40 to unlock some half-decent character skins for my player or wait around for the upcoming DLC outlined below. I think I’ll wait. 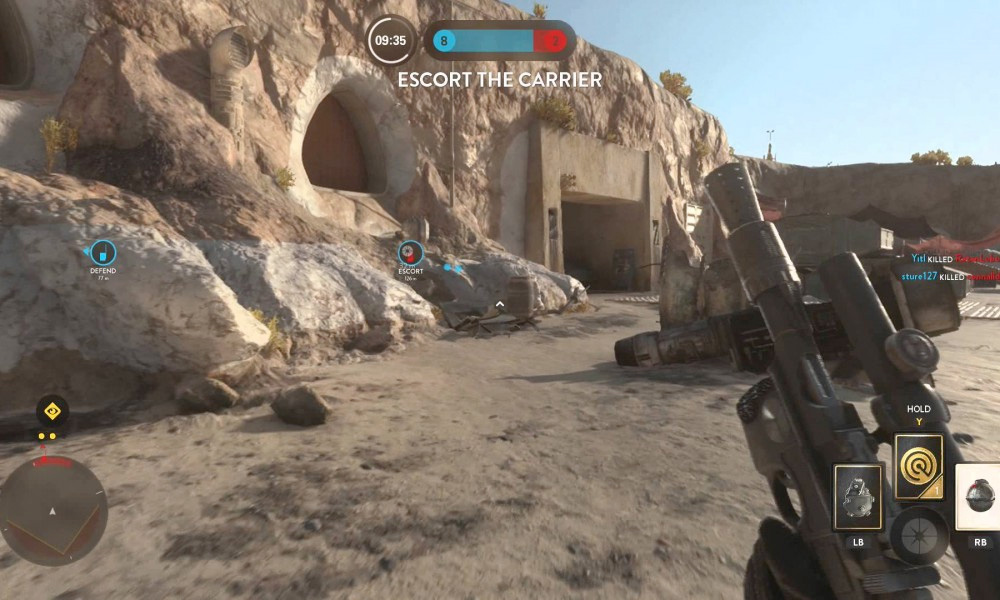 That’s no moon! One of the most iconic locations in the Star Wars universe makes its debut in Star Wars Battlefront. 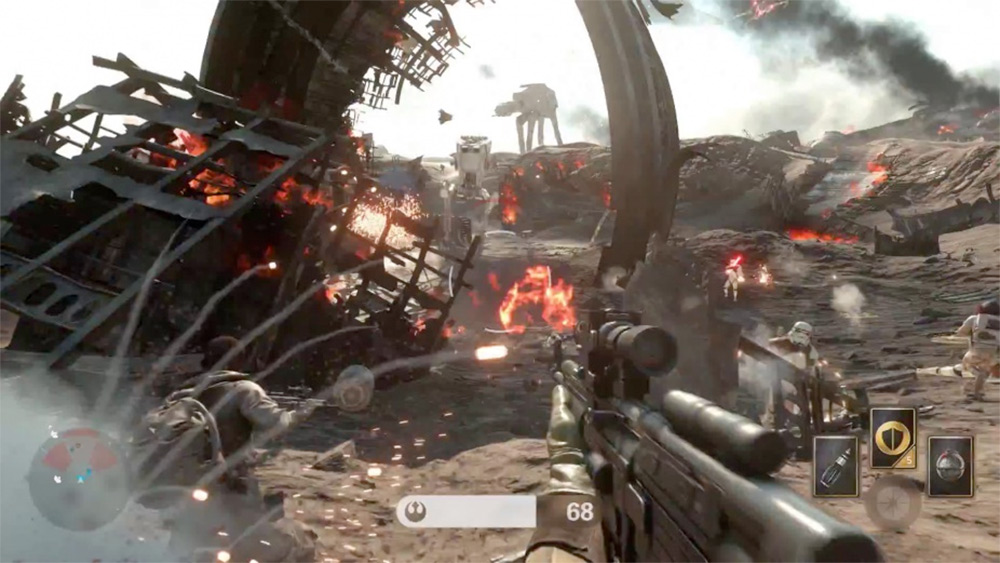