MotherGunship is a bullet-hell FPS set in a world in which aliens have attacked and conquered earth. You are a marine using outlandish and somewhat insane weaponry to go from ship to ship gaining intel and turning the tide of war.

Review of Mother Gunship on Xbox

Developed by Terrible Posture Games, Players take on all manner of deadly robots until reaching the titular boss, the MotherGunship itself.

MotherGunship is a fast-paced rogue-like FPS with excellent controls and a fun sense of humour. It doesn’t take itself too seriously and plays to its strengths. The over-the-top characters are brought to life with a huge array of dialogue and fantastic voice acting. 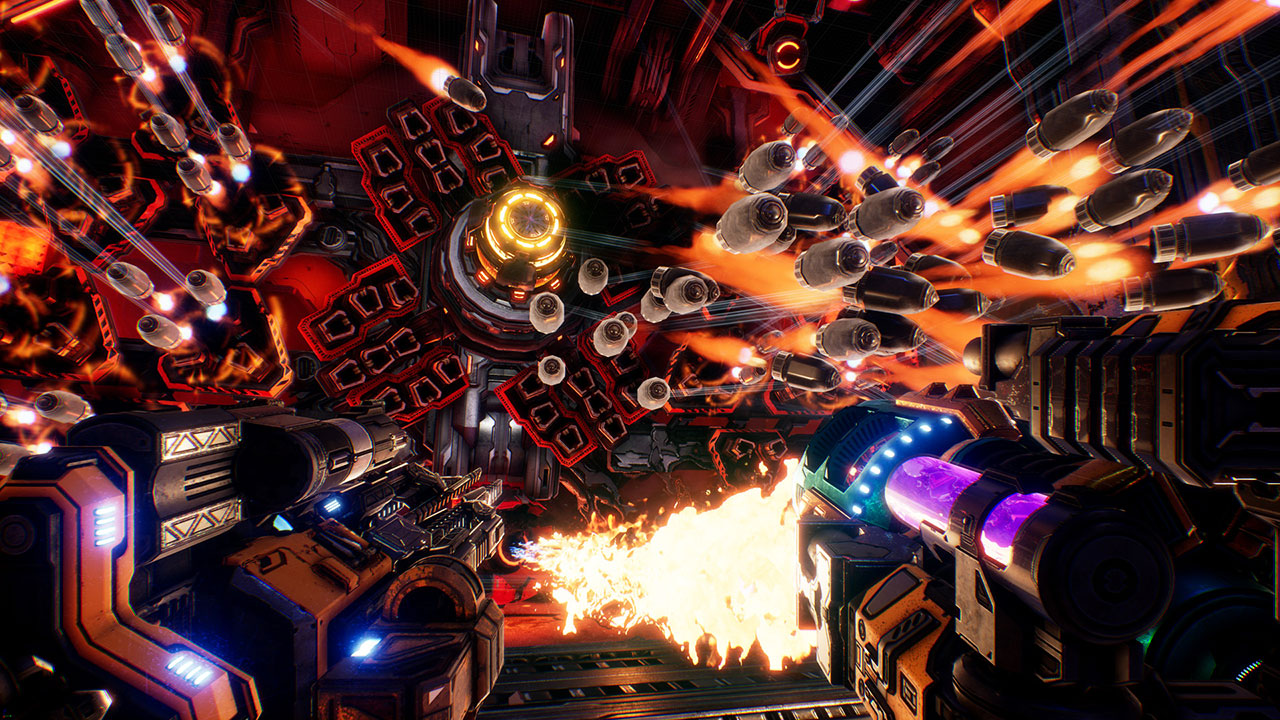 The visuals are stunning with a mix of murky sci-fi spaceships with clear luminous futuristic environments. The levels are varied and large and offer the players a range of challenges in both verticality and close-quarter combat. Robots range from hulking canons to dog-like snappers who chase you around the level making smaller areas feel much more claustrophobic. Whilst the enemy types can get repetitive, the constant change in level layout, enemy placement and enemy type keep it fresh. Whilst the base game doesn’t tread in any new territory, the gun-crafting element does add a whole new dimension as gathering bolt-ons and weaponry becomes more important than the myriad robots that plague the randomly generated rooms.

Environmental elements include lava, cannons, and lasers which are mainly indestructible and add another aspect to the gameplay, as players need to continually jump, strafe and dodge to avoid them. 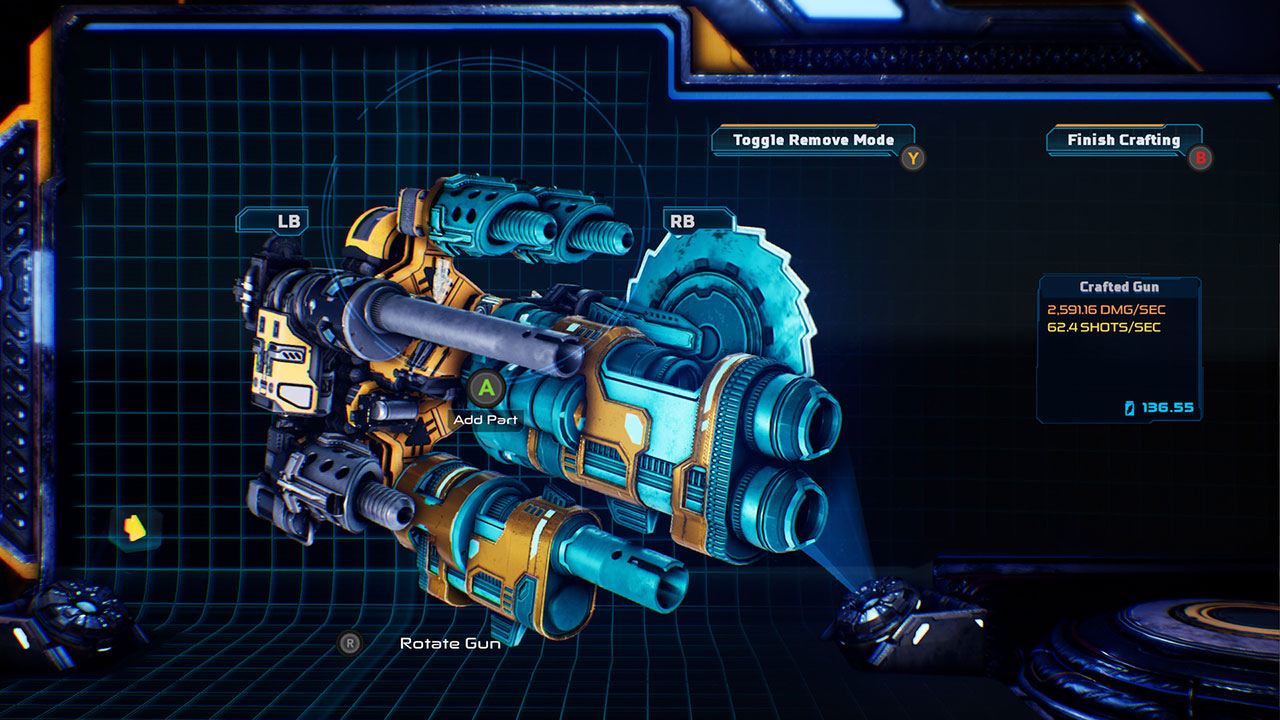 The gun crafting is broken into barrels, connectors and caps. The barrels are the gun parts that might include blasters, rocket launchers or saw blades, connectors that are interconnecting extensions and caps which include boosters and upgrades that increase damage decreases recharge rate and makes bullets bounce around the room.

However, with ridiculous weaponry comes rapidly reducing energy. As weapon energy is a key ingredient in the game, the crazier the creation, the more energy it burns. This means players have to balance their left and right-hand weapons to do the most damage over the longest period.

The controls are responsive and work well with the fast-paced action. Gameplay is tough to begin with, but after a few hours you find your flow and you see just how crazy the game can get. Whether you are working through the campaign or tackling the endless mode, there is so much fun to be had and so many insane weapons to build.

The main complaint I have about this game is the sheer randomness. I have built amazing guns, collected so much… and then died and lost it all. Whatever I learned about the level, the gun types and the build is lost with it and you start from scratch again. Similarly, the next playthrough might be totally different and you find yourself with an excess of coins or less than impressive weaponry to choose from. The randomisation includes the coin drops and the shop locations, so later more difficult levels do not reward you accordingly and you might find yourself working through an entire ship without a shop. With bullets flying in all directions, you literally have to get in harm’s way to collect the coins and health before they disappear.

Overall, MotherGunsip is a great game that is crazy fun, over the top and introduces a ridiculous gun crafting mechanic. However, it is not without its niggles and the randomness of everything can be a little uncomfortable. The multiplayer and co-op features have not yet been activated when I was playing it, so there is more to this game than I have covered. The graphics are stunning and the voice acting is both polished and amusing. Gameplay is fast and responsive and the array of level types keep things interesting. MotherGunship can be insanely hard at times, but the progression is rewarding. I love the concept and expect that the new multiplayer options will add a whole new dynamic to the game. If you fancy yourself as an FPS aficionado, MotherGunship is well worth a play. 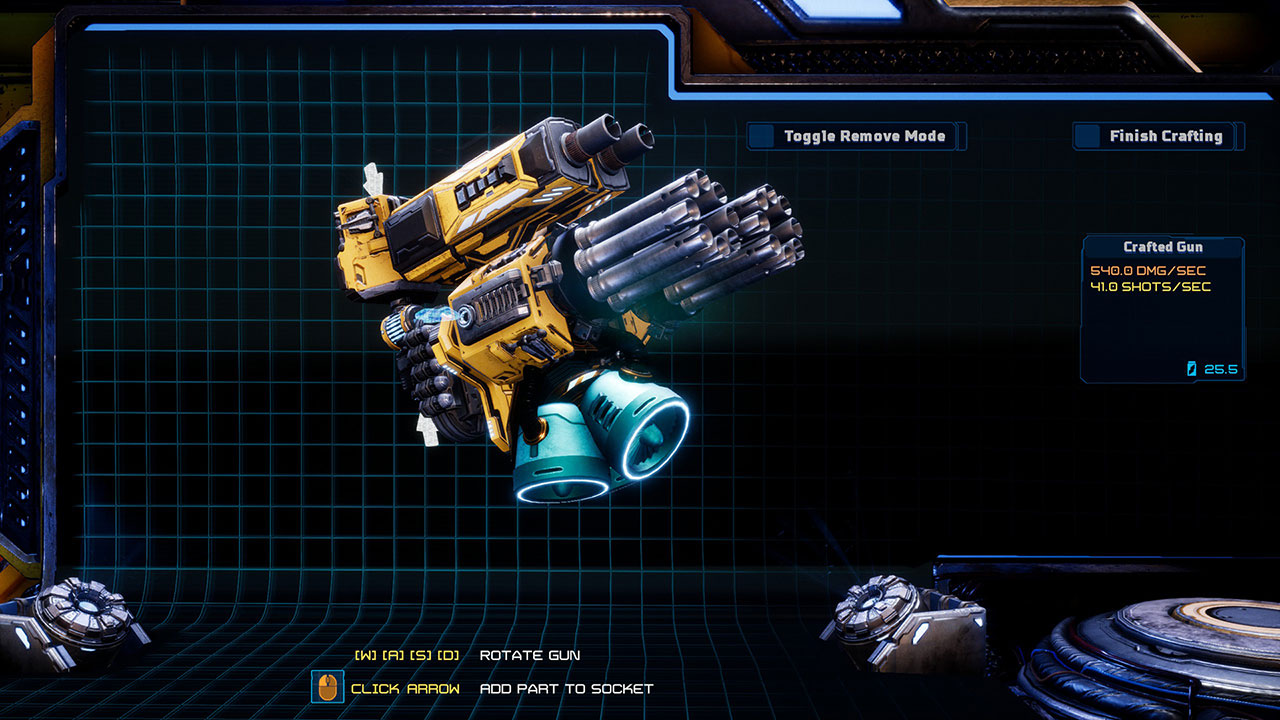