Welcome The Return Of NHL ’94 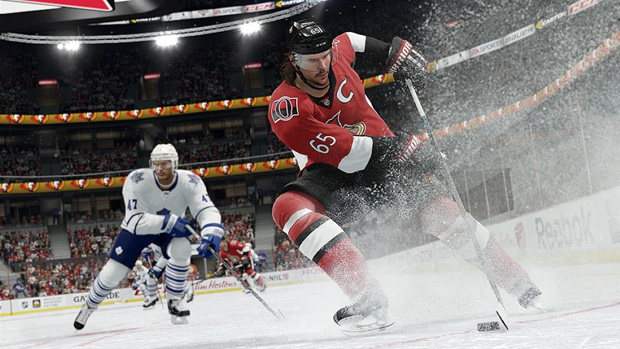 Call it retro, or vintage, hipsters have been calling it cool for years now. Whether it’s clothing, cars, or decor, old school is today’s new age. And now, it’s coming to a video game outlet near you.

EA Sports has announced that it will reissue one of its most legendary games, NHL ’94.

It’ll be a case of old-time meets current day, as although the graphics will be the NHL ’94 version, the rosters will consist of current NHL players. The new version is slated for an Oct. 30 release date.

“It’s today’s teams and today’s rosters with controls and graphics from 1994,” EA Sports said in a statement announcing the revival of this legendary product. “Relive one of the greatest hockey video games of all time with your favorite clubs and stars of today.”

Have no doubt, this is a big deal for hard-core sports gamers.

“‘NHL ’94’ in my opinion is the greatest retro sports video game in history,” ESPN broadcaster Arda Ocal told NHL.com. “It laid the foundation for every hockey game after it and influenced the genre.”

Regardless, It’s also an extremely unusual development in the world of technology and gaming. Going backward is such a rare occurrence in the industry that even the best sports books wouldn’t have offered odds that a major gaming entity such as EA Sports would opt to go back in time more than a quarter of a century.

It’s been stated that NHL ’94 would be on the Mount Rushmore of sports gaming. In 2013, ESPN ranked it as the second-greatest sports video game ever created.

“I don’t think it would be overstating it to say that this game put NHL video games on the map,” Brian Jennings, the NHL’s executive vice president of marketing and chief branding officer, told NHL.com.

NHL ’94 wasn’t the first marriage of hockey and video gaming. It simply was the best ever done to that point, the effort that set the standard for future generations of hockey gaming.

That year marked the first time that the NHL and NHLPA both got on board with the program, meaning that all the NHL’s players and teams could be included in the effort. That made NHL ’94 the most realistic hockey video game to that point.

There were other subtle changes that made ’94 the gold standard for hockey video gaming. The gameplay and graphics made a quantum leap forward that year. For example, blasting a one timer was accessible to game players for the first time ever. Players could fight and yes, they could bleed.

“NHL ’94 is always the one that starts off the conversation of which were the best years,” Andy Agostini, senior producer at EA and the lead on the NHL ’94 Rewind project, told ESPN. “We wanted to bring it back and bring a different experience to people who maybe never have had that.

“I work with a bunch of guys on the team that are much younger than me, and when you mentioned something like NHL ’94, they never played with the Genesis or Super Nintendo.”

In a now iconic scene, Vaughn’s character, playing the Chicago Blackhawks against the Los Angeles Kings, boasts that he can use Chicago’s Jeremy Roenick to make LA superstar Wayne Gretzky bleed.

On-screen, of course it happens as if on cue. In reality, it wasn’t anything like that at all.

“Vince claimed he could do it repeatedly, so we put it in the script,” Swingers director Doug Liman told NBC Sports. “The actors are reacting to that. And then we’re editing the movie and I bring the [game console] into the editing room and we start playing it and we’re recording it onto a videotape so that when we get the one-piece we need we’ll play that back on the TV and shoot it.

“[We do this] for, like, weeks. Nobody can draw blood. And I’m like [to] Nintendo, ‘Hey, can you give us the backdoor key to doing this?’

“It wasn’t like we were having fun playing the game, because all we would do was pass the puck down and set it up for Gretzky to get the puck and then we would, you know, try to slam him into the boards.”