Next gen just got exciting again… Evolve is Coming! 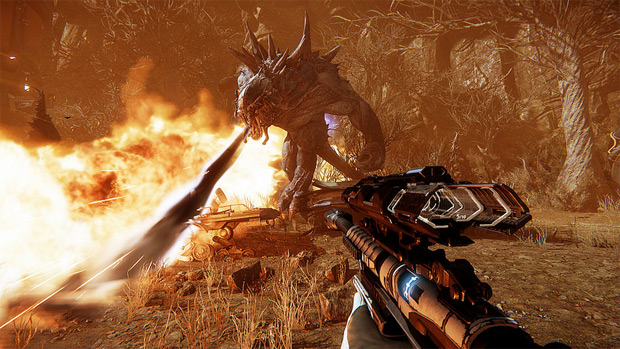 With a trickle of titles coming out for Xbox One and Playstation 4, and Titanfall firmly wedged in our consciousness gamers are looking beyond the next few months to see what other next generation titles are due for release.

Games such as Watchdogs, the Division, and Destiny all look fantastic and yet we have been so saturated in their PR, that we have become almost nonchalant about them. Then along comes Evolve

Salvaged from the burning embers that was THQ, this up-coming co-op shooter looks truly stunning. The left-4-dead style adventure see the protagonists pitted against evolving alien creatures rather than hordes of the undead. Whilst no solid background or narrative has been released the screenshots tell the tale of four human hunters each with classes reminiscent of Team Fortress; Assault, Support, Medic and the all new Trapper. As you would expect the different players have their roles and when said gargantuan alien is beaten down the Trapper can work his magic. The players all come issued with Titanfall style jet packs in order to nimbly jump across the battlefield in their mission to clear the alien forest from the extraterrestrial threat. However, this is easier said than done. The aptly named Goliath is big, fast, breathes fire, can jump like a super hero. Should he be allowed to eat enough food (which is all over the forest), the creature evolves into an even more dangerous foe. Should this cycle continue you and your team of space hard nuts will soon be a monster aperitif. The Goliath is just one of the myriad of critters swarming the swamps and forests and each one will require you to work with your team mates less you all be monster bait. Made by Turtle Rock Studios and Published by 2K Games we are expecting big things from this title when released in Q3 2014. Rumors also mention that Evolve pre-orders will offer players a free DLC character and Monster Expansion Pack.