Angry Birds Go! Sub Zero – Are You Ready For Some Snow? 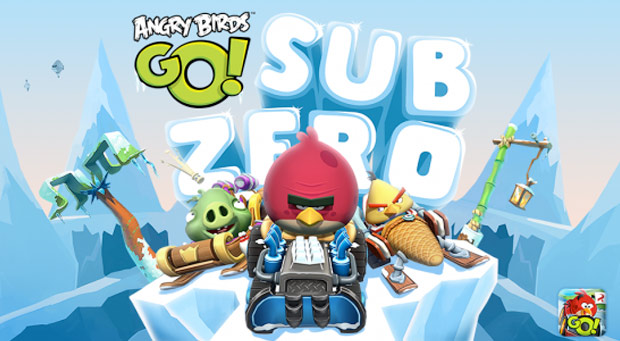 If you have ever seen someone frenetically swiping their fingers across the screen of their smartphones, chances are they were either playing Angry Birds or having a seizure. If you thought that the Angry Birds hysteria has passed, think again, as the developers took a turn in a different direction with the eighth release of the game. Instead of fighting the swines, Angry Birds Go! makes you race them, in a gameplay that will seem quite familiar if you’ve ever played Mario Kart. Angry Birds Go! Turned out to be quite a hit, as the game just received a fresh new episode in March 2014 – Angry Birds Go! Sub Zero.

Angry Birds Go! Sub Zero is a bit more than just a new episode, but rather an update to the overall game. Besides the new tracks and karts it offers, Sub Zero also comes with some modifications to the overall gameplay. In order to understand better what Sub Zero brings to the table, let’s go through the original game and see its ups and downs. Angry Birds earned its popularity due to its charming gameplay that was colorful and simple enough to instantly earn the love of kids, as well as realistic enough (the game’s physics are simply amazing!) to make adults want to give it a shot.

Rovio, the creators of Angry Birds, squeezed everything they could from the game, coming out with no less than seven versions before switching directions. While they did keep the beloved characters and their characteristic colorful graphics when they changed the whole story and purpose of the game with the introduction of Angry Birds Go! They also made some serious mistakes along the way.

The first, and maybe biggest mistake Rovio made, was to forcibly introduce an in-app purchase system that was far too aggressive. Unless you paid to buy some in-game items that would allow you to advance to new levels, you were forced to play each level over and over again to earn enough points to get by without paying. Sure, it is fun for a while, but it becomes frustrating at one point. You also get limited energy, meaning that after a few races, you will either have to wait for your energy to regenerate or spend some cash.

The game gets a lot more interesting with the introduction of the Sub Zero episode, which moves the action to a snow-themed world. This episode brings you 18 new races and 8 new karts, making things a bit more interesting. A new game mode – Slalom was also added, to compensate for the fact that this episode doesn’t come with an end boss. Don’t get too excited about this, though, as the Slalom race is more difficult that you might anticipate. An existing game type –Fruit Splat, was replaced with a snow-themed alternative, Ice Splat, to stay in tone with the Sub Zero theme.

However, even though these modifications have their own role in making Sub Zero stand out, the really important modification is happening behind the scenes. The in-app purchase system was reconfigured, being a lot less aggressive, which means that the game just became a lot more playable without hurting your wallet. In case you do decide to pump some money into the game, you will notice that your real money will be converted to the newly introduced game currency, which you will then be able to use to purchase various upgrades.

Overall, Sub Zero can be considered the true savior of Angry Birds Go!