The feeling of a mere soldier taking down a Goliath such as a one of the hulking metal Titans in Titanfall is one that you will savor and enjoy, but will it keep you coming back for more?

Titanfall is the most anticipated releases to date for the Xbox One. This exclusive first person shooter was raved out during its beta testing and raved about since it’s release. I wanted to find out is all this hype was deserved or simply the media marketing machine whipping me up in a frenzy.

Don’t get me wrong, I love first person shooters as much as the next person but I tend to stick to the single player and dabble with online play in fits and spurts. The Call of Duty multiplayer always dented my confidence, as I would consistently get my ass handed to me on a regular basis despite its best efforts at matchmaking. I found myself fairing better on the Battlefield 4 multiplayer as I could be more of a team player. What I lacked in straightforward running and gunning, I could make up for in support roles such as medics and snipers. The idea of an online only multiplayer filled me with dread but I had to try it especially with all the surrounding hype. 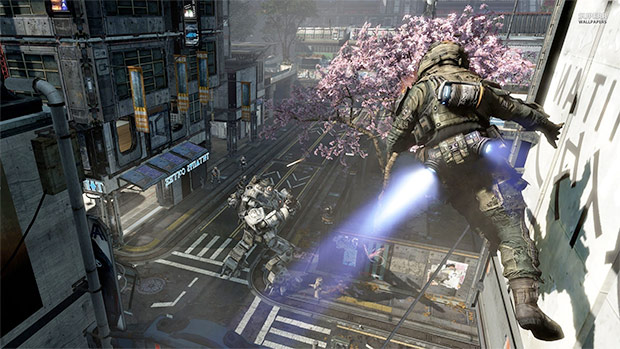 The game has two sides, the campaign driven story mode that sees you play as the corporate giant that is the IMC and then as it’s enemy, the Militia, so you can understand both sides of the story. Sadly, the campaign mode is merely a vehicle to train you up in the various game types and controls. The story is thin and is told through radio conversations as you fight. Half the time I didn’t have a clue what they were talking about and I don’t think my actions on the battlefield changed the tides or war in the slightest. However, the excited chatter did make you think you were part of something bigger and all those kills counted for something. By the time you have cleared the story mode you will be well and truly bitten by the bug are hooked. It’s at this point you tackle the multiplayer mode.

The game box boasts that Titanfall re-invents the first person shooter, which is not entirely true but it does improve on it. The jetpack and wall running is fluid and feels totally natural. Leaping on Titans is easy and when inside you feel the raw power as you clunk your way over the battlefield. Sadly, life inside a Titan is short-lived as you instantly become a giant target for all the little pilots to take out. This balance between Titan and Pilot is superb as you never feel that you are at a disadvantage as a pilot. In fact, I tend to use Titans tactically and use them as bait, have them guard me or even use them as a shield as I wait for the impending drop ship. 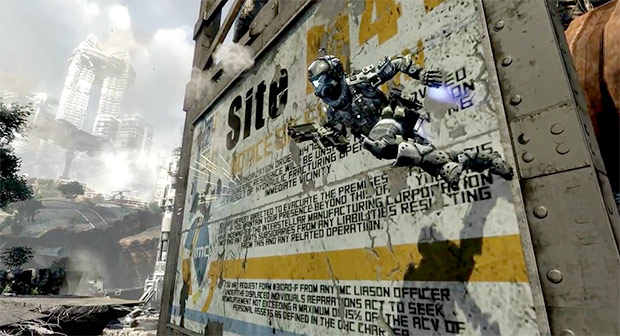 The drop ship is also another great touch. Whenever a round is won or lost the losing side have to escape via a dropship. This is a one minute scramble at the end of a round as you literally run for your life, if you get to the dropship location and get on board you are treated you an escape animation and extra XP. The winning side gets this final minute to hunt the fleeing soldiers happy in the knowledge that the battle is won.

Also in-game you have the use of ‘burn cards’ which are temporary power-ups that last for one life each. The power-ups include new weapons, cloaking devices, bottomless frags, Short Titan builds times and loads more. These cards are earned by leveling up and completing challenges.

The leveling system in Titanfall is just as addictive as the main game and is packed full of challenges such as killing 100 grunts, ejecting from you Titan 25 times or wall running for 5 kilometers. Once achieved, you a rewarded with additional XP and burn cards for use in game. There are challenges for EVERYTHING which really help focus the gamer by giving them goals. Otherwise, it would just be round after round of death matches. Depending on how well you play, you can increase a level every few matches. Every 50 levels, you move up a generation and get a nifty badge by your name. There are 10 generations meaning 500 levels to work through. 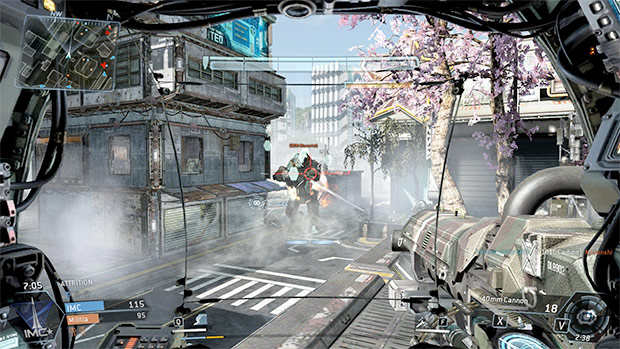 So it looks great, plays great, and has an addictive leveling system… Do I work for Respawn I hear you cry… Well no, it does have some issues. I have already mentioned the paper thin story line but I also found the match matching pretty terrible as well and would often find myself in a team of first generation newbies against fifth, sixth and even tenth generation players. The match would subsequently be a whitewash and my confidence severely dented. At the time of writing, I was a mere second generation pilot with aspirations of working through the achievements for a couple of months before finally throwing it the towel and preparing for Destiny.

To finally conclude this mammoth review, Titanfall lives up to the hype as it is graphically stunning, and plays like a dream, however, it won’t be for everyone as the lack of story, no clear end point and the fact that it is punishingly difficult for newcomers will turn a lot of people off. But for those ready to invest some time up-skilling and learning the maps, this will be their new gaming staple that will keep them entertained for a long time to come. And with a myriad of DLC on the Horizon I see this IP growing vastly over the course this generation. Bring on Titanfall 2.