Rayman Legends has been raved about in the media and is the highest-rated game on the Xbox one to date on Metacritic.

Rayman Legends is simply immense. Not only is the sheer size of the game massive but the variety is equally enormous. If this title passed you by on the Xbox 360 or the PS3 then there is no excuse to try it on the Xbox One. The colourful graphics are both charming and highly detailed, mixing 2D and 3D seamlessness. The colourful characters are well-imagined and animated beautifully that you might just stop playing for a moment just to take in the lush scenery and amusing enemies.

But don’t let its light-hearted charm fool you into thinking it is an easy game. Each level is lovingly crafted offering players a real challenge at all levels and the sheer variety of level styles means you will never get bored. From frantic speed running levels to more subdued and precision-focused levels you will always find a challenge.

When it comes to story, Rayman is a little thin, as it revolves around 700 Teensies you have been kidnapped by nightmares that have come to life. Also missing are a number of Rayman’s friends who are periodically unlocked throughout the game. This loose narrative is just enough to keep you working through the levels of saving Teenisies and striving for a gold cup. If you manage to collect more than a set number you also gain a scratch card that you scratch with your virtual hands to unlock animals, additional levels and more Lums.

The additional levels are remixes of the levels from the much-loved prequel Rayman Origins. If you missed this one then this is a great opportunity to play some of the standout levels from the game.

When it comes to stand out levels, Rayman has them in their droves. The most memorable of which are the musical levels at the end if each stage where you rock out of Black Betty or a South American style ‘Eye of the Tiger’. These levels are not particularly challenging but are just a joy to play as you character runs, jumps and swing in time with the music making for a true spectacle (see examples in my YouTube Channel). 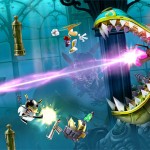 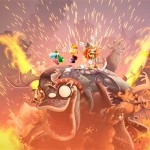 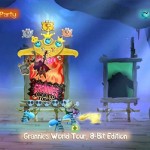 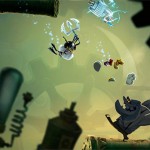 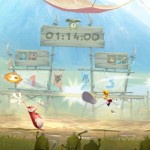 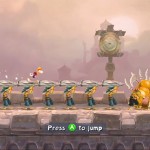 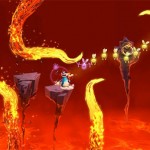 There really is SO much to do in this game as the levels just keep on coming and each one offers its own challenge. Just when you think you have an area beat, the game will crowbar another in just for the heck of it. The unlock-able characters are plentiful with each one offering a slightly different play style. For the collectors out there Rayman is full to the brim of items, animals, and extra levels to collect you will be busy for some time. Finally, just when you think you have it beat you can grab a friend and play co-op play or the amusing multiplayer football game pulling you back in for a few more hours. For someone who really didn’t rate Rayman as a franchise in the past, I have been well and truly converted as Ubisoft have done a fantastic job in creating a true ‘game’ that focuses on simple and tight controls, with levels that are easy to play but difficult to master and is above all ‘fun’. I now understand why it is currently the overall highest ranking game on the Xbox one.