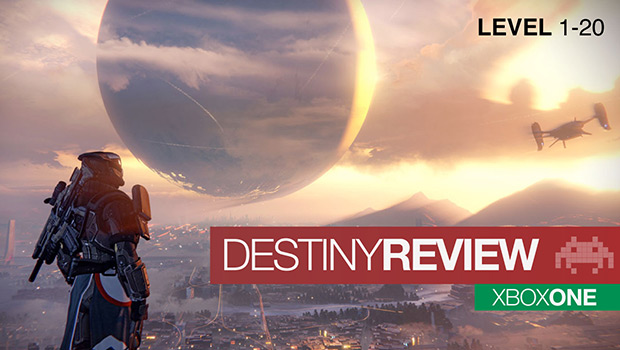 Destiny is a fickle mistress who will take you to exquisite heights in the beginning then drip feed addictive morsels to keep you coming back for more…but I love it!

This review just has my thoughts and opinions on playing the game from level 1 to level 20. This 10-12 hour section of the game has a dedicated story and introduces the player to the planets, aliens and the different mission types. When you hit level 20 the game changes to more of a grind as you tackle set missions in the form of strikes, raids and special missions. Destiny is particularly difficult to fully review as it feels unfinished and more content is being held back to give the game longevity. Many players may choose to leave the game once they have passed the 20 level cap whereas many will choose to grind on as far as level 30 to discover new stories, harder foes and new areas to explore. I expect all DLC content after the this initial release will be geared to higher level players.

I don’t need to tell you that it cost $500 million dollars to make or that Bungie, the creators of Halo are behind it, as Destiny is quite simply a phenomenon. Or at least, it has all the hallmarks of a phenomenon. 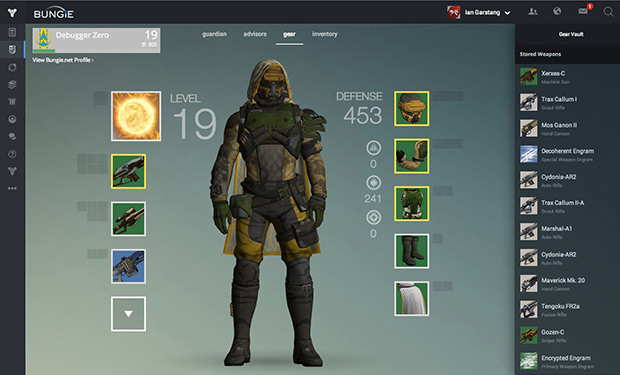 Destiny ‘feels’ different to any other console release to date, which is partly due to the hype but also due to the sheer scale of it. I don’t mean the size of the ‘levels’ or even the amount of planets but the vast amount of information that both surrounds this game and is absent from it.

On the surface, the story is simple; an alien ball known as ‘The Traveller’ comes to Earth, shares its technology and humans expand into the solar system. Then another force know as ‘The Darkness’ kills us all and drives us back to one city on earth that is protected by the dying travellers shields.

The Travellers robot minions known as Ghosts (voiced by Peter Dinkledge) revive you from death (along with an army of other players) to fight back and regain footholds in the solar system. After which, you do what your Dinklebot tells you to do. This mainly involves going to a place, releasing your Dinklebot and then killing hordes of aliens from four distinct races. From one perspective, the story is the weakest element of the game. There are very few cut-scenes and most of the story is told through exposition during loading screens and by offline Grimoire cards accessible at Bungie.net. The few cutscenes there are in the game are unskippabble and the exposition prompts more questions than it answers. 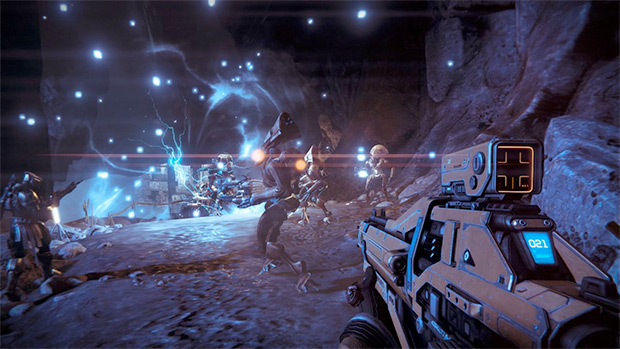 The first hour of the game is truly amazing and promises so much. You wake up dead with many questions (none of which are ever answered) and a mix of cutscenes introduces you to some impressive looking aliens and in-game animations show how you can use the Dinklebot for lighting dark areas. The first newly lit area has aliens crawling over vertical pipes and leaping down onto the gang ways in front of you. The culmination of these sets the scene for a truly awesome game. Sadly, all this ‘treatment’ soon ends and enemies just run out of caves, spawn in front of you or linger in set areas. Despite phenomenal gunplay the story and its delivery is truly awful.

I don’t want to dismiss the story too soon however, as it is early days and I suspect that additional story content will be added to ‘flesh-out’ the stark narrative, as both free and paid for DLC. One theory that is currently doing the rounds is that the aforementioned Traveller IS ‘The Darkness’ and we are its army of undead soldiers which would help explain why everyone in the universe wants us dead. This would add a nice twist on the somewhat lacklustre story.

Bungie has really disappointed me in the story telling department as Knights of the Old Republic (KOTOR) really shone in this respect, so I know they can deliver an online multiplayer narrative led game. 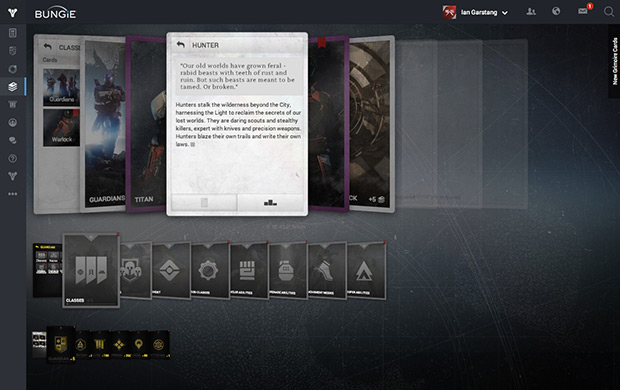 The wealth of information outside of the game supports the idea of Destiny being a phenomenon. On the Bungie.net website, players can see their characters, gear, collectibles, progression and stats on just about every aspect of the game. Other websites offer colour shaders for you to re-colour your character like a barbie doll. There is even a Google Maps powered tour of the solar system, with audio clips and videos as you wander around the ruined cities of our former colonies. The companion app offers players all of this information and allows players to equip different gear ready for when you next play the game. Other third party apps such as ‘Phase’ have also appeared to help with some of the matchmaking issues people have been encountering. 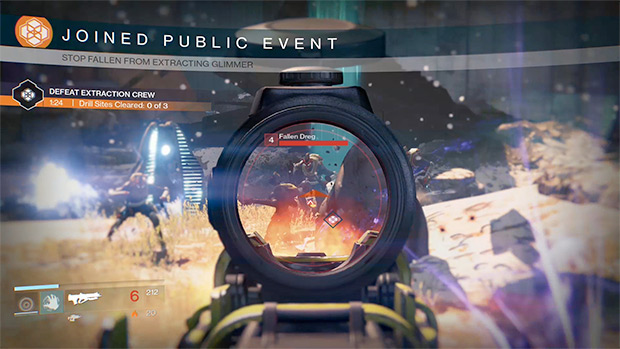 Bungie have said repeatedly that it is not an MMO game but a ‘shared world shooter’. The game has unquestionably phenomenal gun play borrowed directly from Halo and feels polished and immensely fun. The gun types feel different enough and you can feel the difference between a shotgun and a sniper rifle. Sadly, the amount of gun models is limited (but this fact is hidden well) and Legendary or Exotic weapons look exactly the same as lower level weapons despite taking hours of grinding to earn. Shooting enemies have a ‘Borderlands’ inspired hit-point fountain giving you a clear indication when enemies will die. Whilst it is good to see, it can be a little distracting and you will find yourself focusing too much on numbers and health bars which ultimately pulls you out of game’s ambiance.

And what ambience it is… The graphics are visually stunning and the various worlds are beautifully crafted with an array of open arenas, densely packed urban areas, claustrophobic cave systems and large trenches that are great to race around on your speeder bike inspired sparrow. The accompanying music is breathtaking from the epic scene-setting music that oozes grandeur to etherial tinkle of of space. The myriad of sound effects are astounding with an array of alien shrieks and screams, as well as weapon sound effects are both meaty and satisfying. 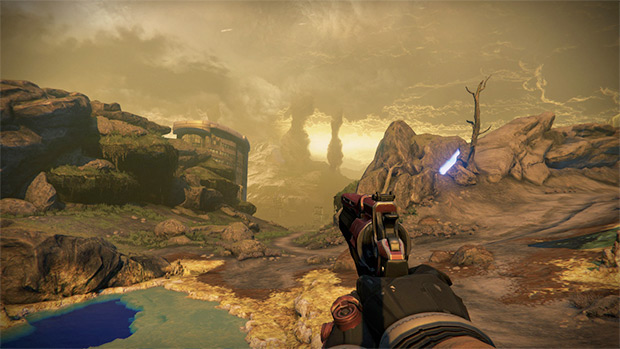 The action spans across various planets in our solar system that include Venus, Mars, Mercury, Earth and the Moon. Whilst this is enough to finish the story it does leave unanswered questions about the other planets. Planets are navigated around using a ship that can be altered, however, the space ship sections only act as loading screens and exposition dumps which really feels lazy considering the budget. It is, however a nice touch when doing a strike, raid or multiplayer match to see the various players ships all converge on the chosen planet together. 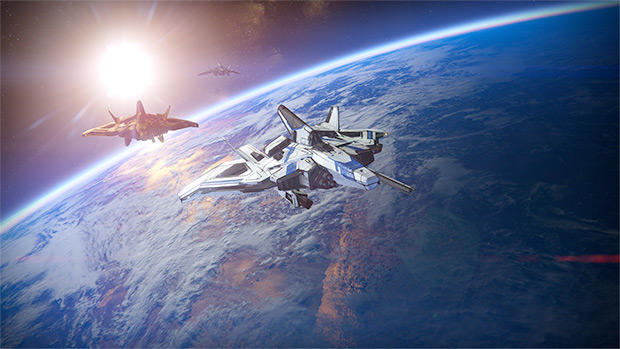 As beautiful as these loading screens are, there is a lot of them and they can take a while. Similarly, when roaming around an empty world playing solo there is no pause or save function so if you get disturbed during a boss battle then you have to leave for orbit and start the mission again a fresh. Crap.

The boss battles in Destiny are ‘generally’ ok but they mostly use larger versions of aliens that we have already seen. Their ridiculously high hit count means that they are simply bullets sponges and require the same tactics from one boss to the next. Sadly, after an uninspiring lead up to the final bosses, they turn out to be very disappointing and all the questions remain unanswered. 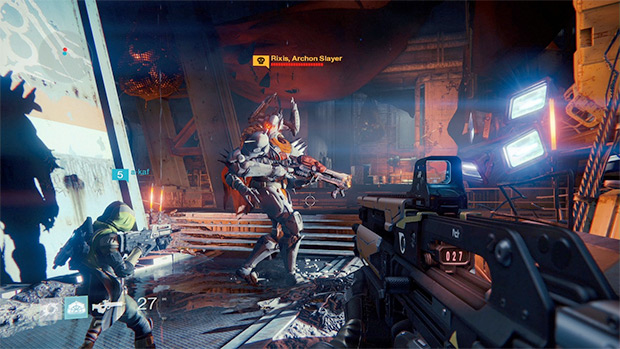 The multiplayer is fantastic and players can still earn XP and gear for participating. As the loot drop system is totally random and massively frustrating is much more fun to duke it out in the Crucible than grind for 6 hours killing the same enemies over and over again for the random chance of getting something good. There are 10 maps that vary from close combat encounters to open battle fields with a handful of game types. New game modes have appeared as special events and more maps and game modes will be rolled out over the game’s lifespan. Unfortunately, weapon attachments and abilities stay active and some exotic weapons can still one shot kills meaning despite Bungie’s best efforts at removing weapon advantage it can still be unbalanced.

Overall, I am addicted to this game. I have thoroughly enjoyed playing Destiny so far and will continue to enjoy it as more content is released. The game looks and sounds amazing and the gunplay is beautifully crafted. This game has created a new genre that I can only describe as ‘Protracted Shooter’. It is a long-term action game with RPG elements aimed for short bursts of entertainment that will grow over time and slowly reward its user base. This stepping stone between arcade FPS shooters and fully realised MMORPG is a reflection of the ‘next generation’ of gaming mixing an always online gaming community with a steady stream of digital content. I can’t ignore the fact that there is no story beyond the initial opening sequence and the lack of cutscenes just seems lazy. The loot drops are too random and coupled with being consistently kicked off the server there are many aspects of this game that will infuriate you. I feel that too much has been held back for this initial release and hope that more ‘free’ content will be released soon to plug up the gaping holes. The Sword of Crota mission was a break from all the shooting and indicates what could be done but it has not been realised at present. However, the game is still epic and the core gunplay mechanic will have you hooked on both the ‘story mode’ and multiplayer for months if not years to come.

This game has people split across the internet… what do you think of it? Add your comments below. 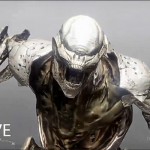 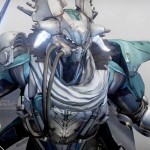 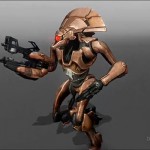 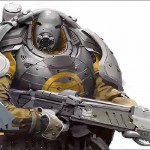 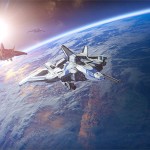 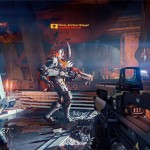 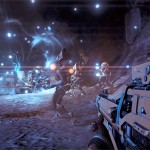 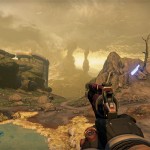 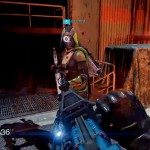 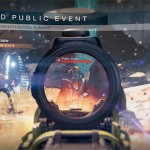 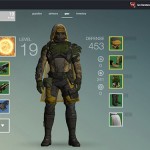 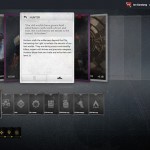 [Update: 02/10/14 – The latest update has helped a little as you can now get ‘Legendary’ drops on ‘Strike’ missions and the Crucible offers more kit to players.]