As the cold clammy hand reached out, I could almost feel deaths icy breath on my neck. The unknown darkness seemed to chase me through the peaceful suburban streets into he village square and then, just when my soul was about to be consumed by the Grimm reaper himself, my rockets fired, I put the peddle to the metal and grandma Martha was blown from my path and sacrificed to the hooded figure chasing me on a motorised scooter… Welcome to the whacked out world of Coffin Dodgers! 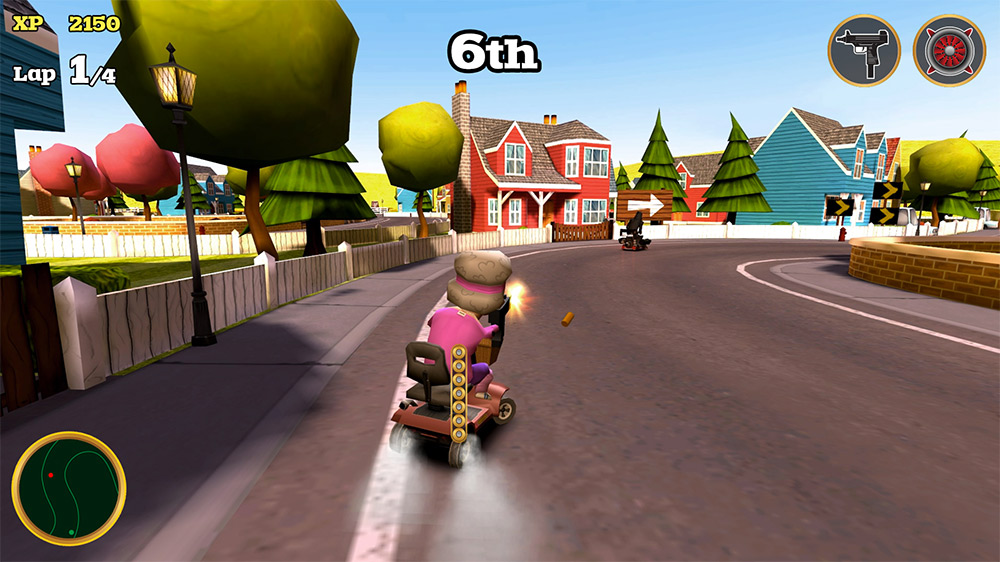 Coffin Dodgers is a kart racing game that can either be played in single player or via split screen. The single player has various game types that include a story mode, time trial and open world mode. The story follows follows the exploits of seven old age pensioners who challenge death to kart race to save their souls and extend their life. If you finish in the top three in each stage you can proceed through the game and eventually unlock death as a player. Those less fortunate have their souls reaped and come back as zombie racers and act as enemy racers. The story mode lasts just over a hour of you choose not to retry races or grind to upgrade your kart.

Each stage has three races and enjoy names such as Sewer sortie and hump back blitz.

All the courses are set in colourful village of Sunny Pines and the open world mode allows you to drive around and find the races unlocked in the single player campaign. 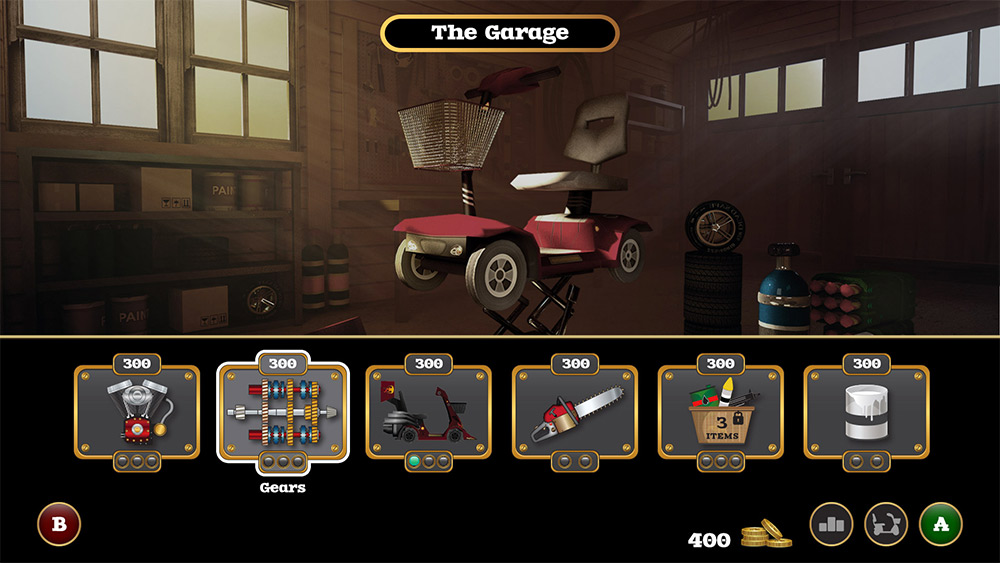 In the single player mode, players gain XP for completing races, knocking down objects and zombies and knocking out other players. This XP is converted to coins that can be spent in the garage. The garage allows you to upgrade your engine, handling, melee weapon of choice and how many weapons you can carry, as well as various cosmetic options such as colours, decals and go-faster stripes.

The options menu has the usual fare of volume, music and language but the auto accelerate is a good option for younger players.

The weapons are dissapointingly ordinary with machine guns, rockets, shields, oil spills etc. This could have easily been substituted with a more imaginative collection of weapons such as knitting balls, porridge spills, false teeth grabbers and complain-a-trons. 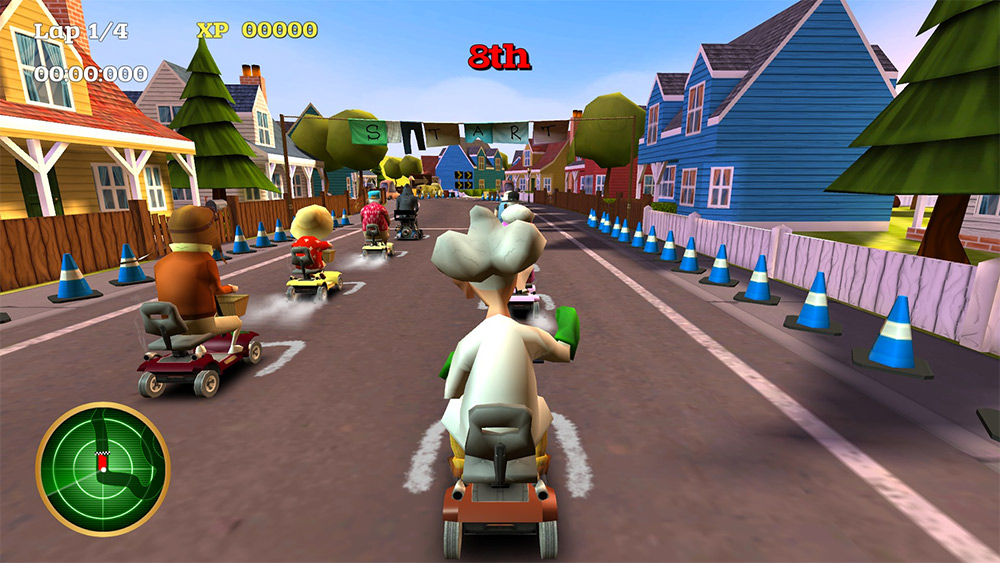 The multiplayer has a simple verses mode and explore mode in which two players can roam around Sunny Pines.

The additional ‘Crazy Grandad’ mode is a fetch game, where you must race around the town collecting items before the time runs out, in a strange crazy taxi style mode.

Graphically, the world of Sunny Pines is well realised and the characters are suitably varied. The music suitably zany and sound FX work well.

The gameplay is fun, but can be a little erratic and if you find yourself being taken out in the second half of a race it is hard to catch up even with speed boosts. The story will entertain you for an hour or so and the multiplayer is good for couch co-op. With the colourful graphic and auto accelerate, I would say this is more directed at children, but you would have to make your peace with dying old people and zombies.

Overall, it’s short, fun and cheap. The concept is funny, the characters varied and the world suitably stylised. I hope this is a success as i would like to see a bigger, better and more polished sequel in the future. 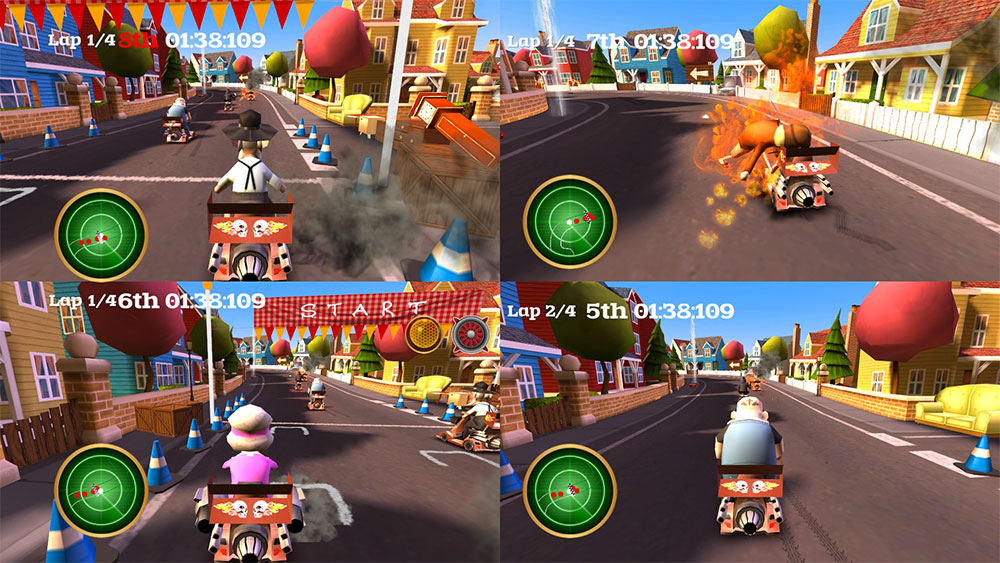 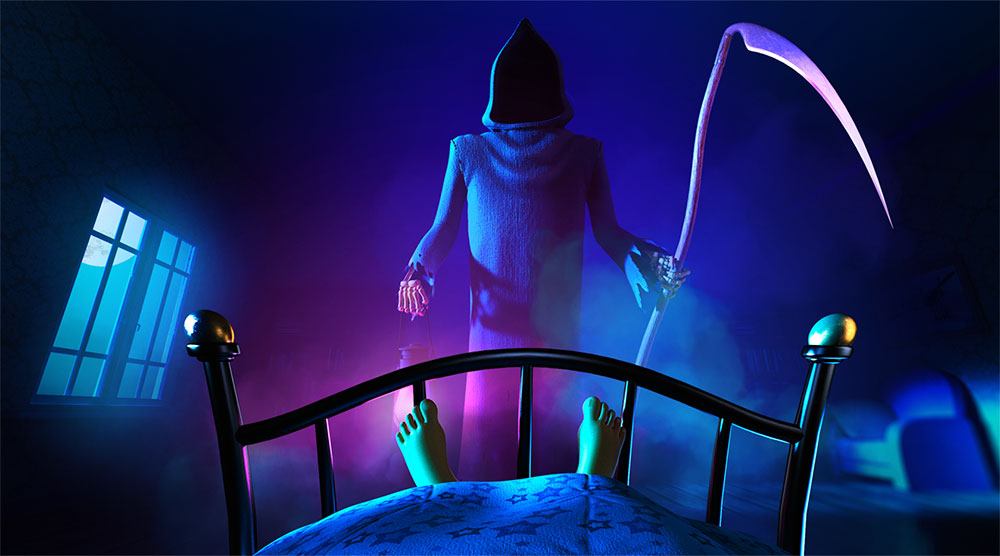 Summary
Article Name
Review of Coffin Dodgers on Xbox One - Short, Fun and Cheap!
Description
Coffin Dodgers is a kart racing game that can either be played in single player or via split screen. The single player has various game types that include a story mode, time trial and open world mode.
Author
Ian Garstang
Related ItemsfeaturefeaturedXbox One