ChromaGun is the indie game that I wish I’d made. It’s a stripped back pure first-person puzzle game drawing on the very best of the genre. ChromaGun has enough similarities to Portal to draw a comparison, whilst being refreshingly unique in so many ways. The main protagonist does use an experimental weapon to solve a variety of puzzles around a test centre, the game has near constant narration by an amusing yet serious guide and the white walls and minimalist environment does bear some similarities to the Valve classic but ultimately it is a very different game. 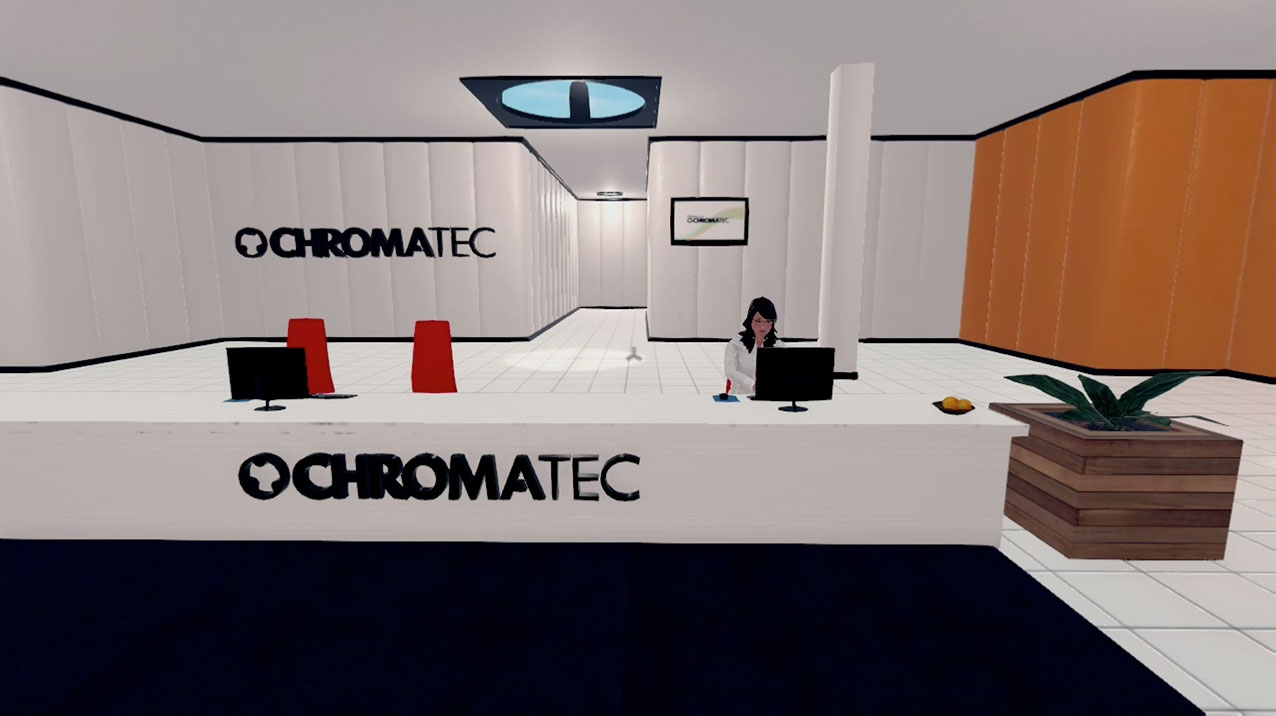 ChromaGun is a game about colour mixing, switches and drone management. There are no holes in time and space, but doors, switches to open said doors and robotic drones that act as keys. Paint a drone red and it floats to the nearest red wall. Paint two opposing walls red and the drone hovers patiently equidistance between the two walls. This mechanic is vastly different to portal creating a whole new experience.

ChromaGun does not linger on world building like Valve’s 2007 ground-breaking Portal but simply begins by giving the player a brief introductory scene introducing a pseudo-scientific facility and quickly arming you with the titular paint-ball gun. Players will soon learn how to identify the surfaces that are susceptible to paint, and how the various pigments may affect their surroundings. 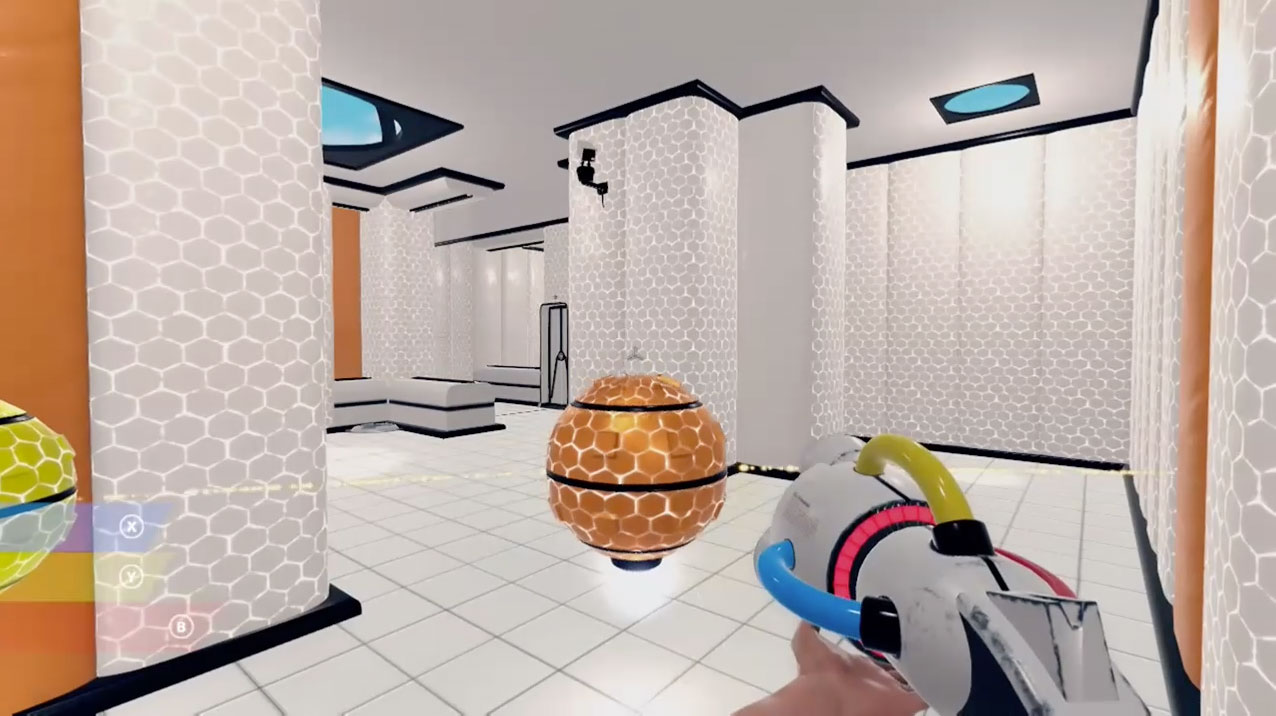 Most of the game’s puzzles revolve around the deadly worker drones that must be guided to switches, buttons, or electrified tiles. The drones are drawn to surfaces that match their own colour, meaning that players will have to paint both the walls and the drones to ensure they go where they are supposed to.

The ‘weapon’ from which the game takes its name is not, in itself, very impressive, nor is it a weapon. Firing it at drones either changes their colour or simply annoys them into chasing you. Firing it at cameras simply changes where they face as the three colours have insufficient power to even destroy them. Players may cycle through the use of red, blue, or yellow paint, but there’s not much beyond that. These primary colors will often need to be combined to create green, purple, and orange to mix things up a bit. Adding any pigment to a secondary colour, though, results in a dull brown that’s useless for drawing in the drones that may otherwise turn on the player and end their journey. 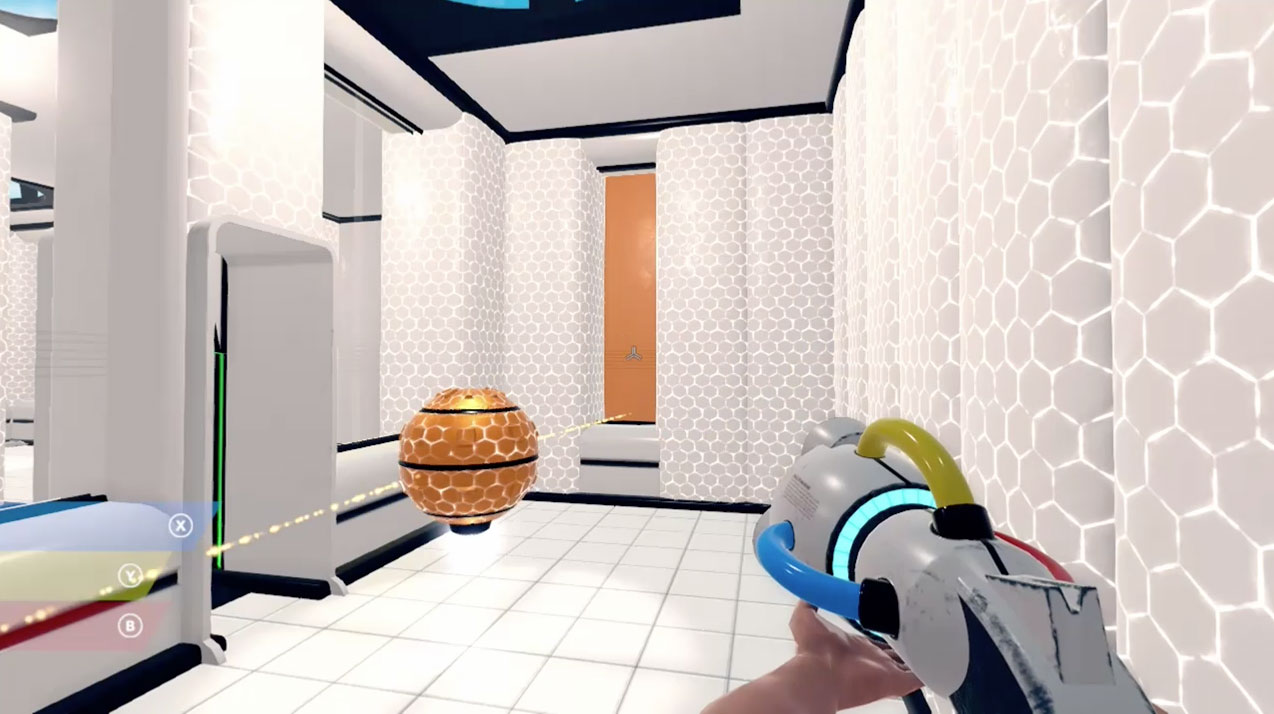 ChromaGun works on a ‘my way or the highway principle as there is really only one way to solve many of the puzzles and will punish errors by forcing you into a corner until you restart. One of the beautiful things about Portal, and other puzzle games that stand out from the crowd, is that it’s actually quite difficult to really hit a brick wall. While these games still present a challenge, they often present alternative problem-solving angles to allow players to recover from their own mistakes.

However, this aspect is far from a deal-breaker. It’s a well-designed game, and free from the bugs and fun to play. The puzzles increase in difficulty over time, presenting a solid challenge to players as they go. Gameplay is smooth, though the graphics feel a bit dated and lack variety. The sound effects are passable, but it’s the decent voice acting by way of the narration that really gives the game its personality.

Out on the 20th August, this is a must for Portal fans.