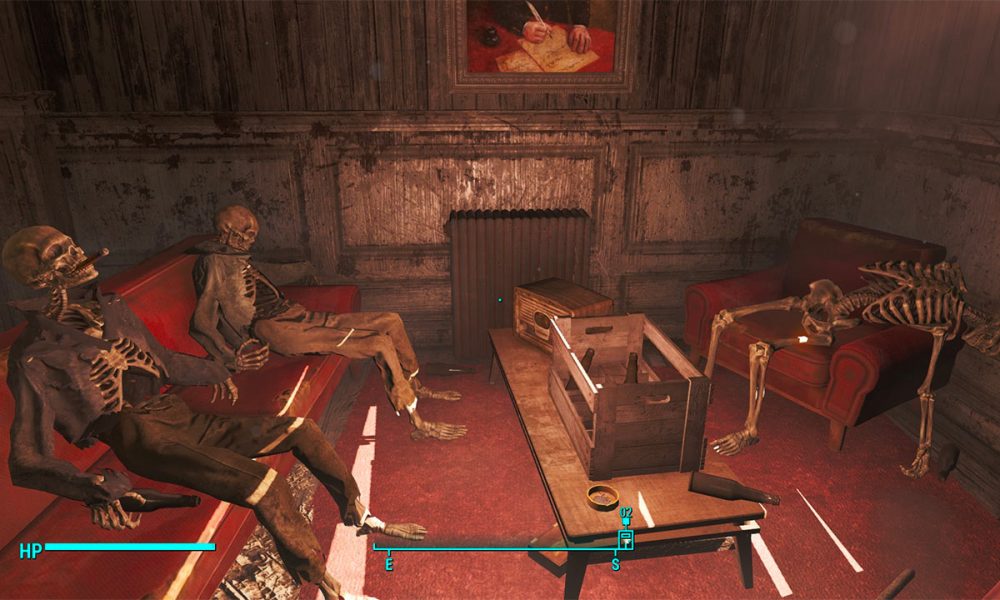 The father of fantasy, J. R. R. Tolkien, wanted to create a poetic legend that he felt England lacked. Mythology was the very structure of culture but is now a source of entertainment. From spoken word to film, from scripture to novel, from Beowulf to Baldur’s Gate we have seen the art of storytelling transcend through media. In video games, this craft has been massively expanded upon, but how? In this piece, I’ll be covering the role that art plays in conveying a story, the components of narrative design and the specific content that feeds into a living, breathing world. 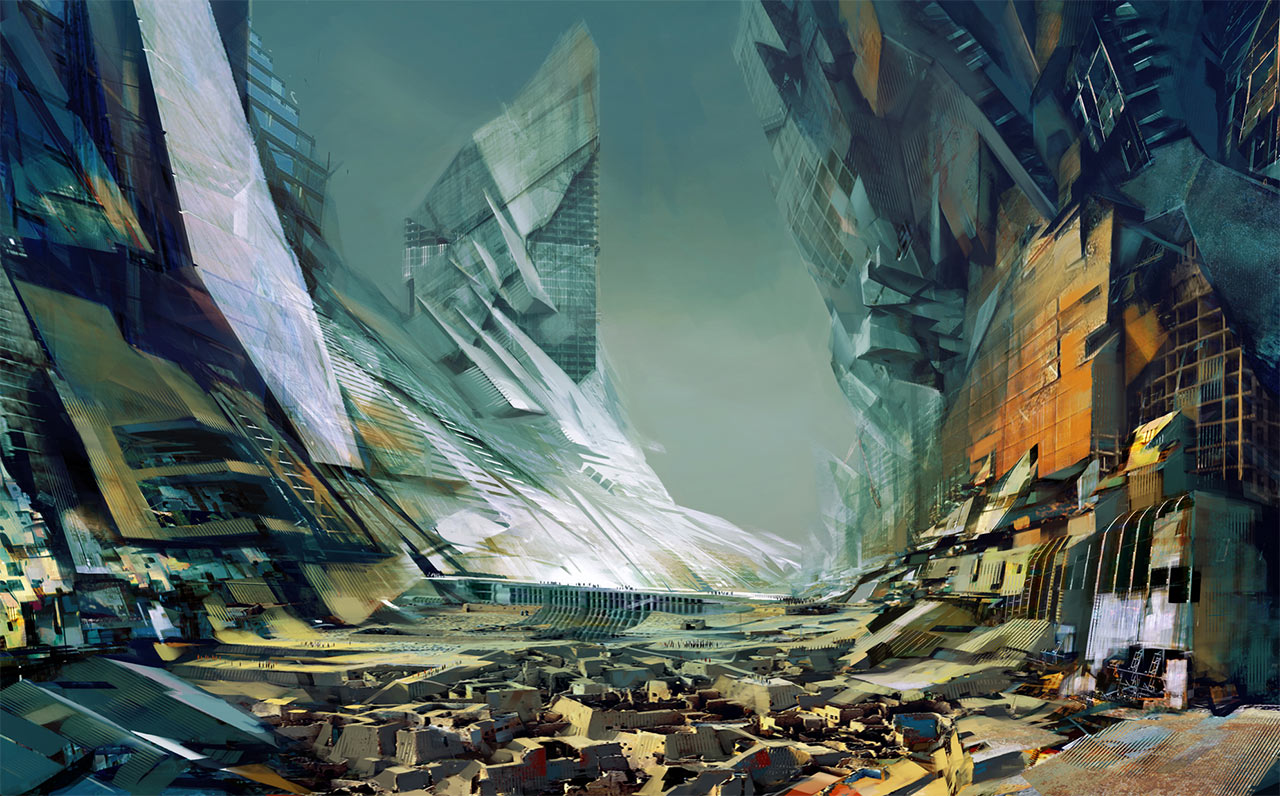 A way to translate myths or legends into imagery, art plays just as important of a role in communicating a story. One of my favourite concept artists did this brilliantly for ArenaNet’s Guild Wars series – Daniel Dociu created the visual framework for the MMORPG. His vibrant and figurative landscapes set the tone that moved us through our quests. But he was not alone in this ability, in BioWare’s Dragon Age series we can see a plethora of beautiful imagery that tells a story; a mixture of graphic illustration and darkly romantic images can be found scattered across the game. With a talented team of artists working on this series, such as Matt Rhodes and Daphne Hutcheson, there are a variety of styles weaving the narrative tapestry. For me, it’s symbolic of the many voices of Thedas telling their version of the story. Overall, concept artists play a massive role in the construction of the story – Adam Adamowicz is a notable example. The creator of Fallout’s mascot Vault Boy, Adamowicz’s work added to the philosophical depth of Bethesda’s Fallout series – contrasting the 1950’s inspired propaganda with the harrowing post-apocalyptic fantasy to articulate the message. Having also worked on The Elder Scrolls series his talent hummed life into the high-fantasy poeticism of both Oblivion and Skyrim.

Where would storytelling be without its symbolism? From Battleship Potempkin’s runaway pram to the landmarks of Wuthering Heights, there is always a point to get across, hidden in clues and imagery. We can see this pattern in video games. When talking about symbolism, the Bioshock series comes to mind. In Bioshock: Infinite you might notice a series of posters depicting colonialist, Puritan propaganda in the style of Uncle Sam. In the first title, the environment is symbolic of capitalist devastation – an abandoned 1920’s city being submerged by the ocean it was built under. Whitney Clayton, the concept artist behind Compulsion Games’ We Happy Few, pumped the game full of symbolism depicting Herbert Marcuse’s One Dimensional Theory. Utilising the masks worn by NPCs, a garish colour scheme and a pinata turning into a rat before the player’s eyes. 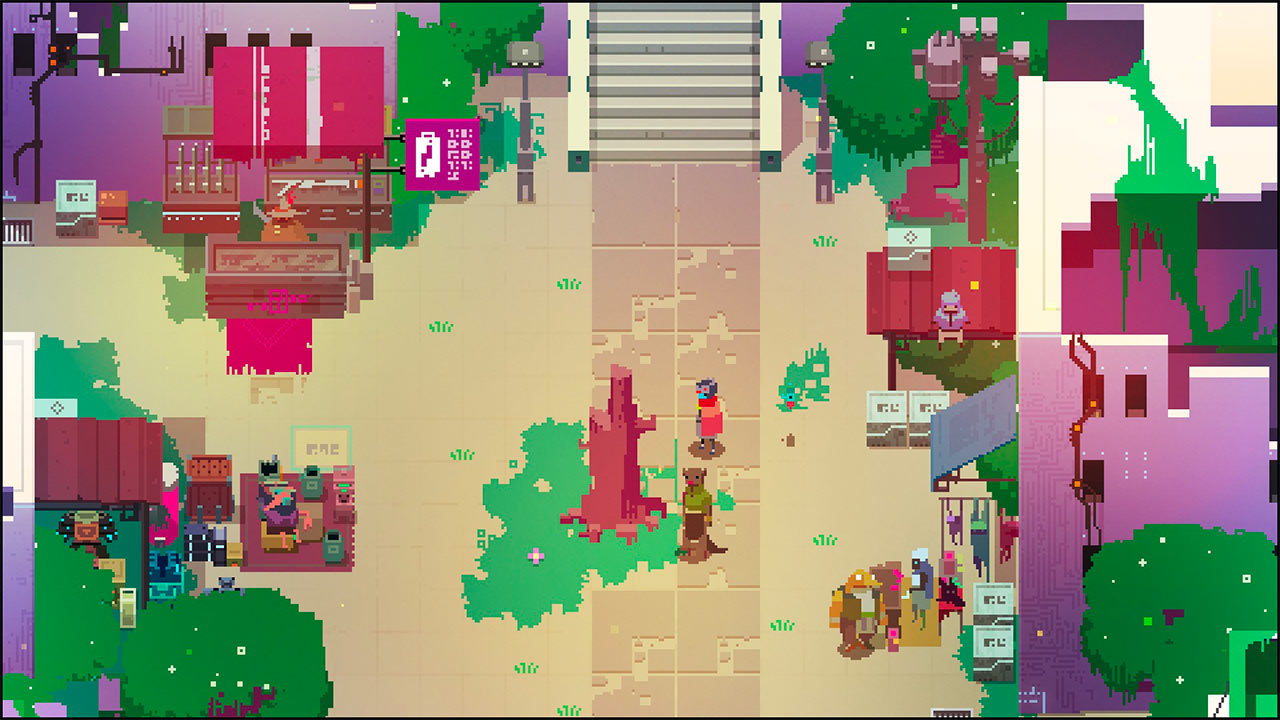 There are games that rely solely on art and imagery to tell their story – such as Hyper Light Drifter. A visually stunning game with morbid undertones and a story being told through art alone. The design of which was brought to you by Alex Preston AKA HeartMachineZ. The player can encounter NPC’s that tell of events using nought but images, there are a collection of monoliths with a fictional alphabet that provides folklore or cryptic messages, and cutscenes provide no dialogue or clear explanation. This leaves the player to connect the dots and infer from context. I also want to mention the obscure trailers for Hideo Kojima’s masterpiece – Death Stranding. Since the game was announced last year, Kojima has provided little information about the game itself, but for two cryptic trailers and an article penned by Kojima on Rolling Stone’s website. The famed developer relies on imagery and song to hint at a story that utterly encapsulated his audience. Kojima says that: “We don’t need a game about dividing players between winners and losers, but about creating connections at a different level.” Many have put forth theories about the game that land in this area, so it’s clear that no words were necessary to get the message across. With examples like this, visual storytelling can be seen as a powerful tool.

Moving on to the other end of the spectrum, we come to narrative design. Specifically, overall plot, quests and NPC relationships. There are a number of other aspects but we’ll get to a few of those later. As mentioned, the overall story or narrative of a game doesn’t always need language. But it helps. My top two favourite examples of this are Bethesda’s Fallout 4 and BioWare’s Dragon Age: Origins. First of all, the immense, like crazy immense, depth and detail flowing through the Fallout series, especially Fallout 4, is staggering. From subversive themes to the personal struggle of the lone survivor. There’s hardly a part of you that remains unscathed by the story.

Let’s start with the plot – we’re given a fairly classic story trope here, which some may not agree with for its simplicity. However, I feel that the stories surrounding it add enough complexity that a straightforward plot isn’t such a bad thing. There’s something absurdly real about your driven mission being caught amongst the drive of others. It reminds me that no matter how much of a protagonist we feel in our own lives (naturally), almost everyone around us feels the same way. This leads me into my next point – NPC relationships. This was done especially well in Fallout 4; adding Synths into the mix gave the appropriate contrast to make us really feel for the human race. But beyond that, being able to build your own outpost, hamlet or haven, your own community, that simplified the process whilst bringing warmth to the wasteland. The quests didn’t, for me at least, see much improvement, but that’s mostly because they’ve always worked well with the canon, so why change that? I did appreciate their reflection of the regional culture from the before-fore times. From the fairly on the nose ‘witch-hunt’ side quest to the Noir mystery-solving themes and conspiracies governed by major scientific conglomerates. Overall, Fallout 4’s story read as a hyper-vigilant commentary of American society both contemporary and historically. 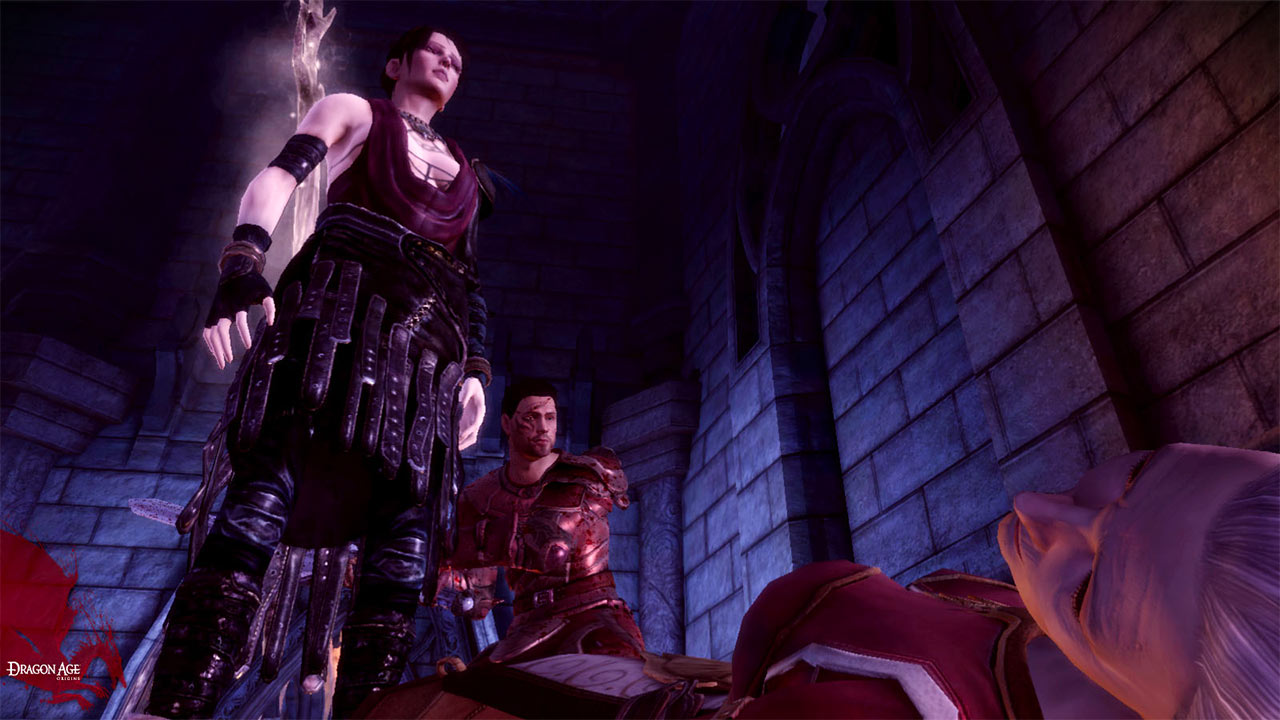 My love of Dragon Age: Origin’s narrative comes from a different place. As mentioned, Tolkien once said that he wanted to create a poetic legend that he felt England lacked. For him, something was missing from mythology that drove him to invent his own. This kickstarted the Fantasy genre and has been a source of inspiration for countless others. I love the creativity that can be pulled from thin air, the romance that can be found in the earth, in water and in adventure. I love the trend of artists creating their own myths and legends. As such, I love BioWare’s first contribution to that.

The overall plot insisted that doom is inevitable in our world – represented through the darkspawn’s compulsion to seek out and corrupt a god into an apocalyptic force. Whilst reminding us that hope still exists, in the interludes between total destruction. At the forefront of this, they demonstrate how these periods of struggle facilitate personal growth, evidenced by the Grey Wardens shortening the reign of destruction each time. In regards to the character’s plot, what I enjoyed the most was the combination of humility and heroism in their journey. With fairly pedestrian beginnings they wind up with the charge of destroying an arch-demon. However, the NPC’s around them are so rich and dynamic that the glory doesn’t isn’t wholly thrust upon your character, it’s more shared. This not only allows your character to grow through others it’s also a humbling change that reminds us we’re not always the centre of the universe.

If there’s one thing BioWare do well, it’s character study. This is why the protagonist-NPC relationships were so engaging. While many games had already incorporated a romance option, Dragon Age: Origins made this an equally important part of the story. Overall, it’s the varied relationships that you build and, toward the end, I always felt like my party was more of a family. It was a game that really made you cherish the involvement others had in your character’s story. Finally, the quests. BioWare did a good job of catering to their players, similar to guilds in The Elder Scrolls, Dragon Age: Origins had missions catering to different classes. All of which, from the very simple gathering quests to the more eventful demon battles, flowed back into the expansive universe. Through which, BioWare put their own, personal stamp on the fantasy genre.

Looking at the literary details, however, I feel that there are better examples. My top two picks would be The Elder Scrolls saga and the Amnesia series. I remember playing Skyrim for the first time and, though I never read every book cover to cover, I was blown away by the depth of it all. From the pivotal ‘Elder Scrolls’ to ‘The Lusty Argonian Maid’, the fact that a group of people had sat down and written all of this was astounding. Some may ask what’s the point? Who’s gonna read it all anyway? Well, you’d be surprised, but the ‘point’ is to bring their universe as close to a living thing as possible, to immerse the player in a world that they’ll wish to be real but to also weave together a fathomable collection of folklore.

Amnesia’s game was more puzzle oriented, so the literature was a lot more cryptic. Here it played a more dualistic role. In The Elder Scrolls, you’re roaming freely through an expansive country, picking up quests as you go. In Amnesia you’re scampering through a linear plot, in which knowledge equals survival. As such, the literary works to paint a picture, but a really abstract one that maybe you’re looking at upside-down. In A Machine for Pigs, most of what you come across are self-scribed notes or letters written by the player-character. In Dark Descent, it tells a little more of the history as well as the present situation. You can differentiate based on the role the protagonist plays in each game. With the more personal tone present in Amnesia, you could follow the path of a character’s demise, getting to know the ghosts of people that found themselves in the same torment. In A Machine For Pigs, you were able to follow or discover, your own descent into madness and disillusionment. This worked to construct the story of the game and added to the nightmarish, mind reeling feeling. 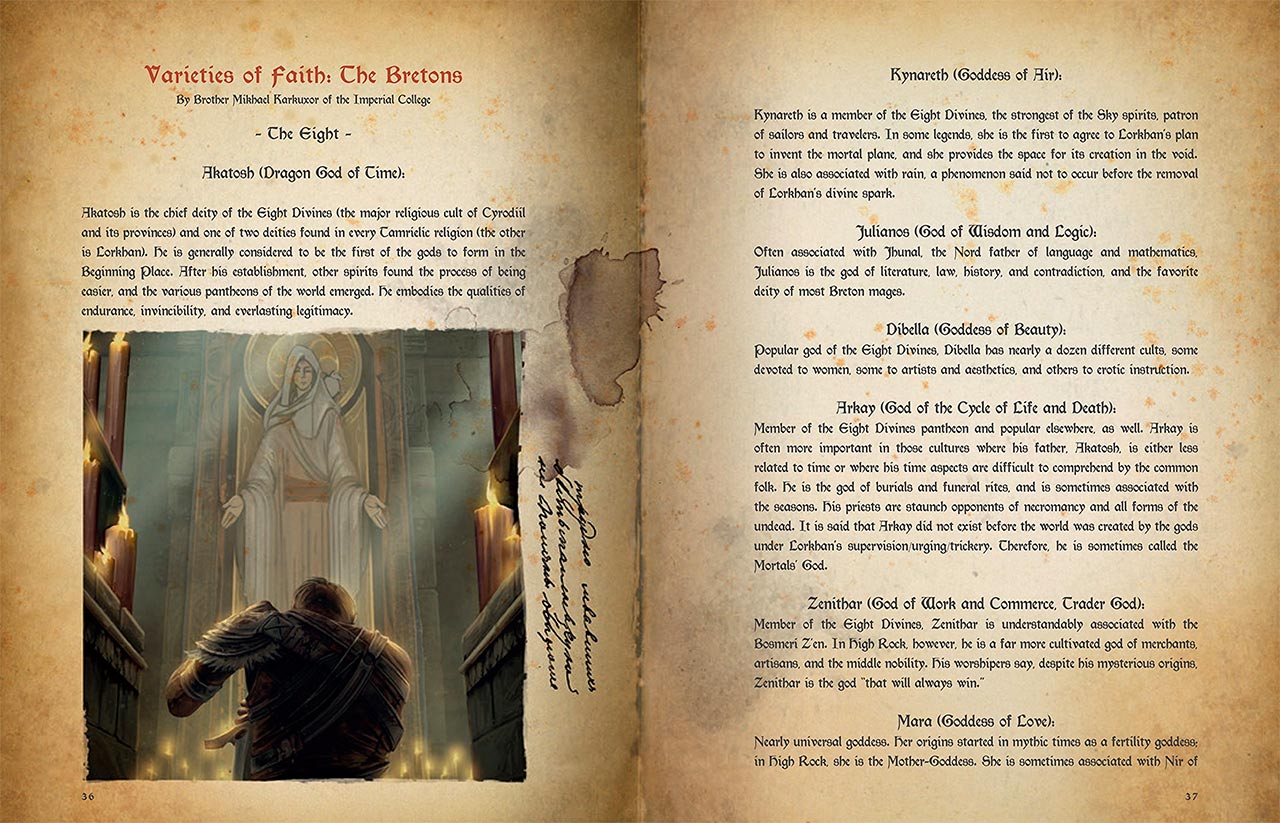 Lastly, I want to give a special mention to literature in Fallout 4. I loved the collectable magazines and comic-books, which brought more colour and whimsy to the game. Bethesda does a great job of tongue in cheek humour with the Fallout series, and these little remnants of the previous world exemplify this. One that stands out in my mind is the ‘Grognak the Barbarian’ collectible – a comically medieval axe and loin cloth that can be found in the Silver Shroud quest. Giving a vague shout-out to 1950’s and 1980’s geekery. This component of gameplay brought a great interactive experience that unlocked aspects of character and homestead customisation, among other things. Additionally, I have to laugh at the idea of the lone survivor risking life and limb scouring the wasteland for magazines and comic-books. If you remove the context of customisation and think of it from a purely role-playing perspective, it’s an absurd endeavour.

So we can see that the art of storytelling has found its new home in video games; providing this generation’s artists with a playground of experimentation. Whatever game they’re working on the opportunity is given to reinvent the craft. In addition, it allows the player to experience this as something old made new. Aiding immersion, moving us and giving us a part to play in it. It has become an interactive media in which we are the protagonists, we are the story or at least a portion of it.