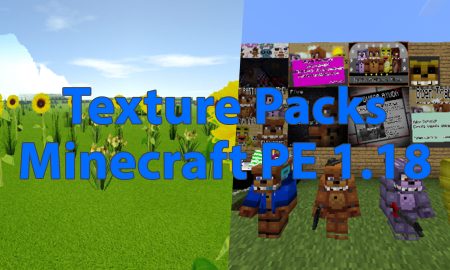 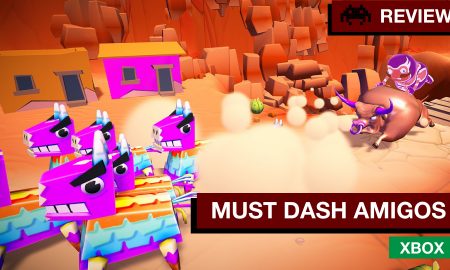 Survios and MGM have teamed up to deliver a purely arcade take on the sport in a fast-paced title based on the Rocky and Creed film franchises. Survios is no stranger to both boxing games and the Creed franchise after creating the VR game Creed: Rise to Glory back in 2018. However, Rumble Boxing is more in the vein of Ready to Rumble Boxing than Fight Night, so purists of the sport looking for the next Fight Night Champion may be disappointed. 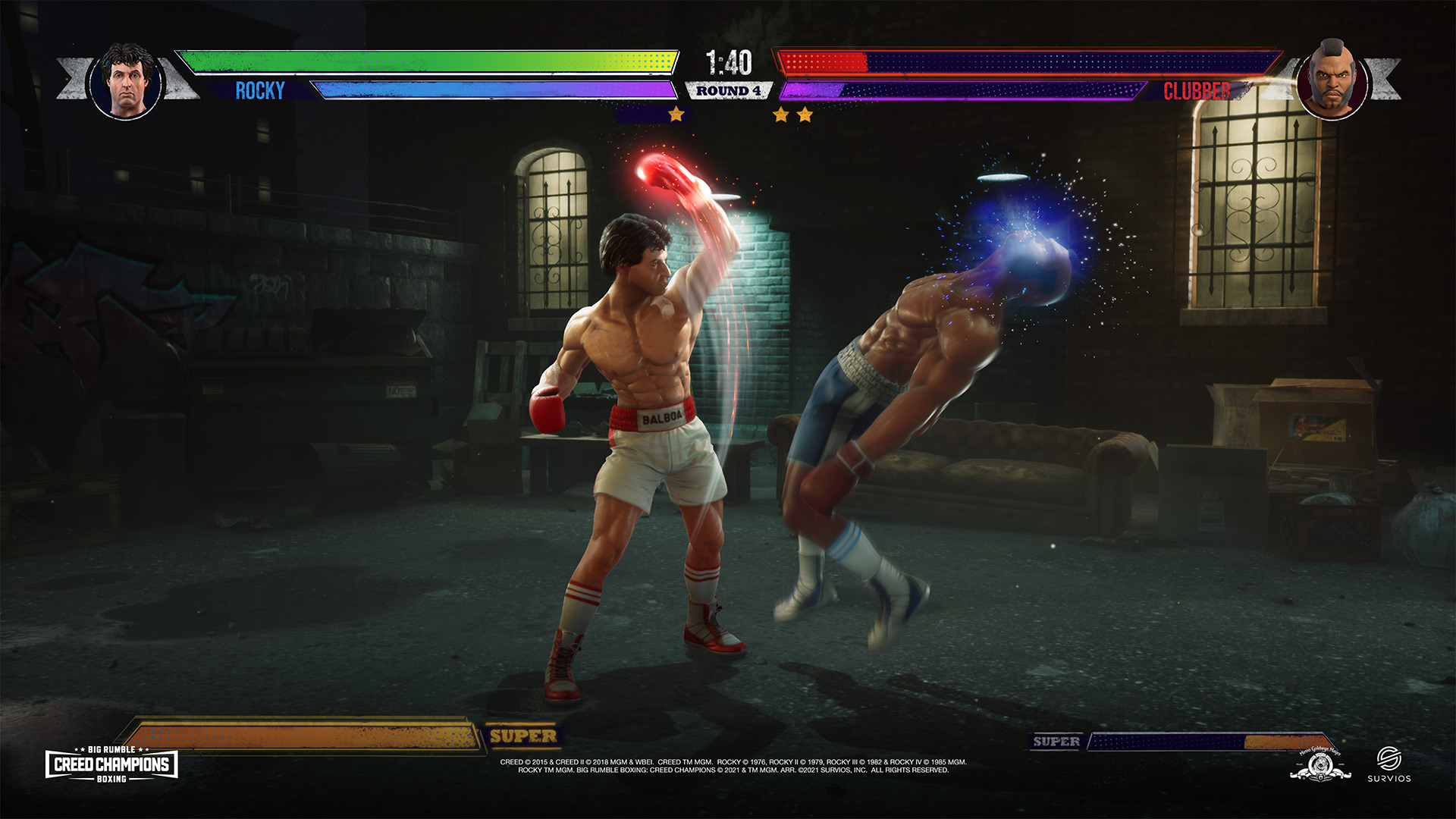 Rumble Boxing follows the Rocky story from a retrospective perspective, as Old Rocky recounts his journey to Adonis Johnson, Apollo Creed’s son and hero of the recent Creed movies. As he weaves his tale of back street brawls and epic title bouts, the player will step into his shoes and replay the fights. To mix it up, there are also a series of training mini-games that will see you running, hitting punch bags and tenderizing meat to ready yourself. The mini-games are short-lived and never overstay their welcome and become easier as you get used to them.

The fights themselves are where the game comes alive. This arcade battler has a series of faster jab moves on one button and slower more powerful on another. The remaining buttons allow you to grab, dodge, block, and move. Special moves can be performed when your power meter is full and the meaty clobber of a perfectly timed uppercut can be felt through your controller. Dodging and blocking become essential as you progress through the game but it’s pretty easy to pick up and play if you prefer the button-bashing approach. 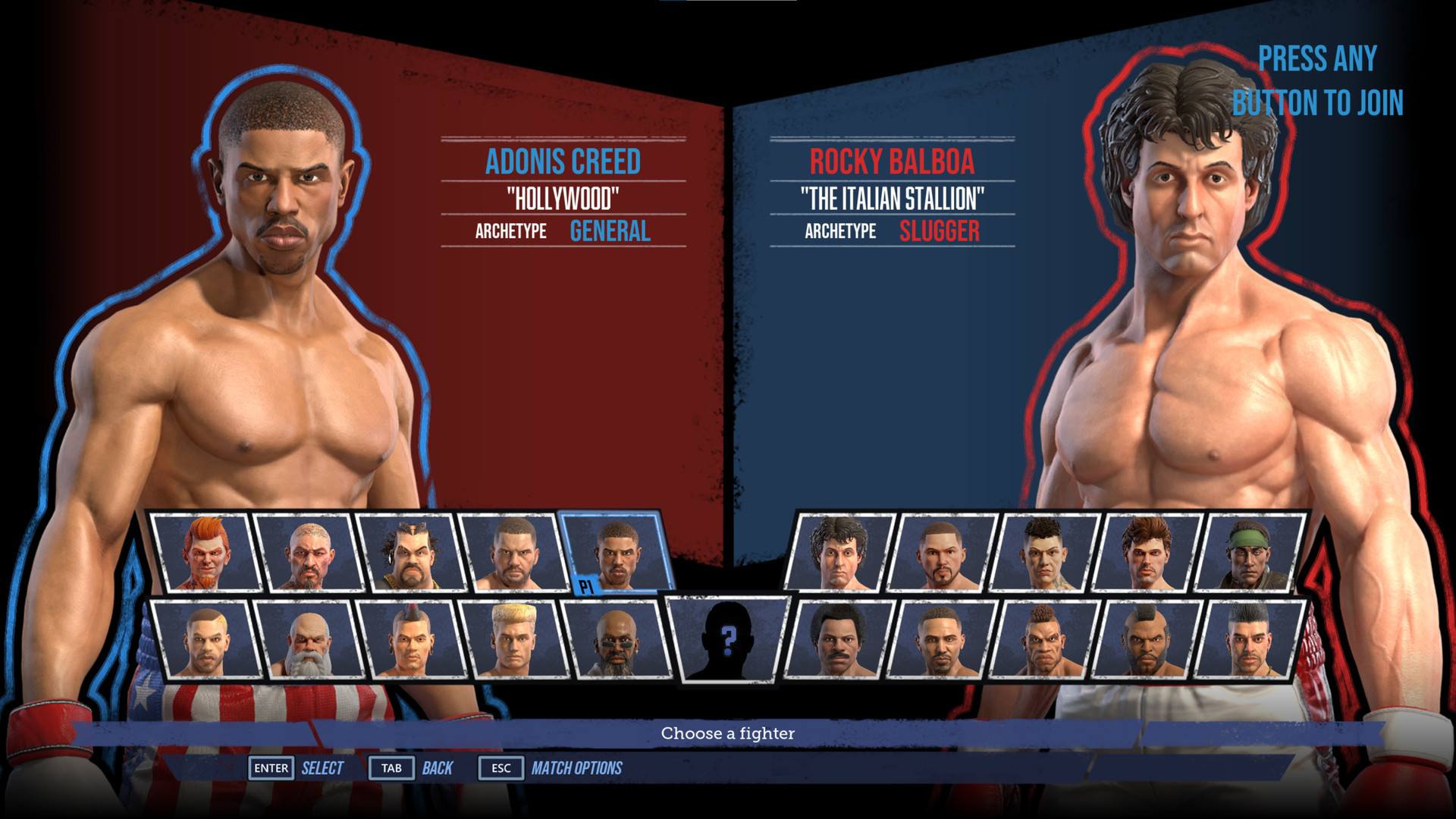 The different boxer types include Sluggers, Swarmers, and Generals, with all playing different enough. As you might expect, sluggers are slow and powerful, swarmers fast and weaker and the generals sit in the middle. There are 20 fighters on the roster and include many of the characters found in both the Rocky and Creed franchises. Different fighters can be unlocked through playing the game (and not through paywalls – thank you) with most being unlocked through versus mode. So if you want Apollo Creed or Mr. T’s Clubber Lang you will need to put some time into the versus mode.

The graphics flick between 3D fighting and 2D character interactions. The cartoon style takes some getting used to, but grows on you. The 2D dialogue sections look great but would benefit from some audio as all the reading may put some people off. The quick skip addresses this issue but draws you away from the story they are trying to tell. If you haven’t seen any of the movies then the dialogue does a good job of bridging the gap and helps to explain why in one match you are fighting a jeans-clad Irish man in a back alley, then going for the championship belt in the next.

The 3D character models of the characters you know look amazing, despite their oversized heads. The additional characters still look great but are serious stereotypes from the Scrappy Irishman, Big Black Security Guard, Native American and Viking turned boxer. 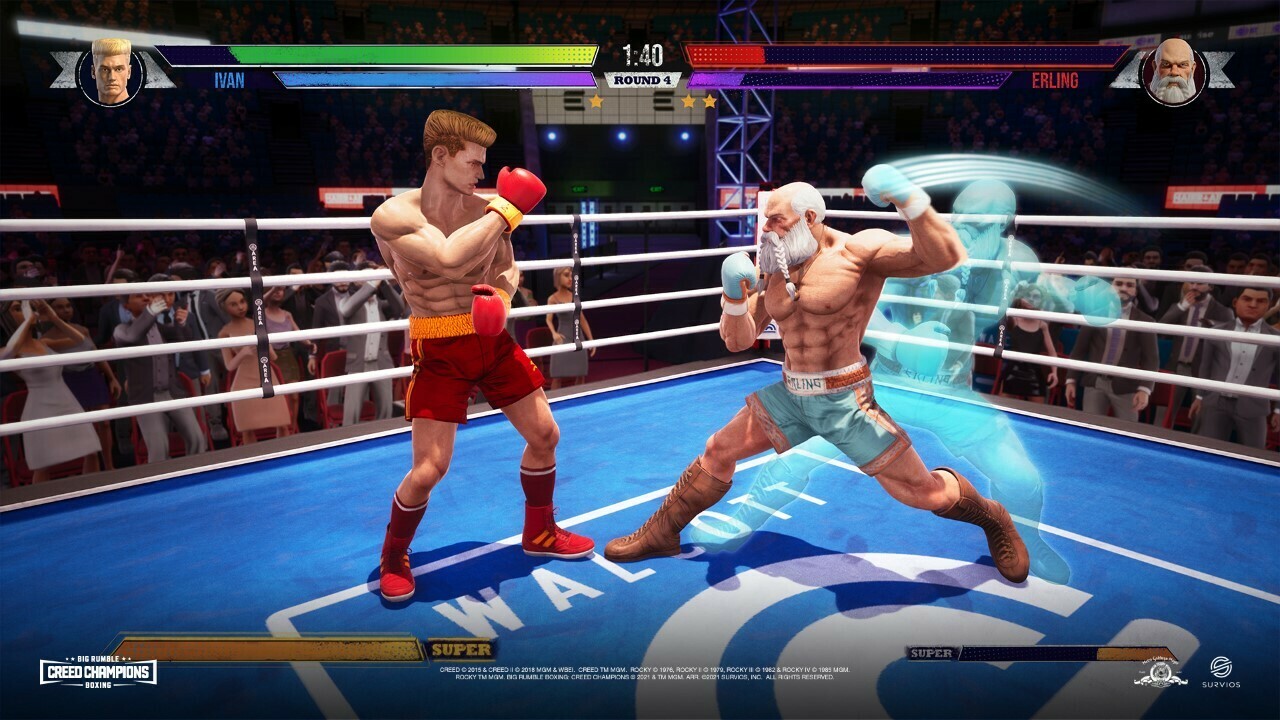 Rumble Boxing has all the music you might expect and you will be training to the classic Rocky montage, and recognising Eye of the Tiger at various points. The voice audio is used sparingly and is mainly used to start and end fights. However, if you knock people down (or get knocked down yourself) there is also the odd jeer or comment.

Overall, Rumble Boxing is a welcome addition to the long-neglected genre. It enjoys the speed and arcade fun of Ready to Rumble Boxing with a learning curve that requires players to learn the complete move set to complete. The graphics Walk the thin line of being stunning and silly whilst the music and audio captures the spirit of the franchises. Fight Night fans will have to wait a little longer for a more technical game, and some players will be turned off the single-player game due to the amount of reading. However, Rumble Boxing is lots of fun with friends in versus mode and the single-player is a nostalgic jaunt down memory Lane for fans of the franchise. For fans of Boxing games and the Rocky movies, this is just the game you have been waiting for. 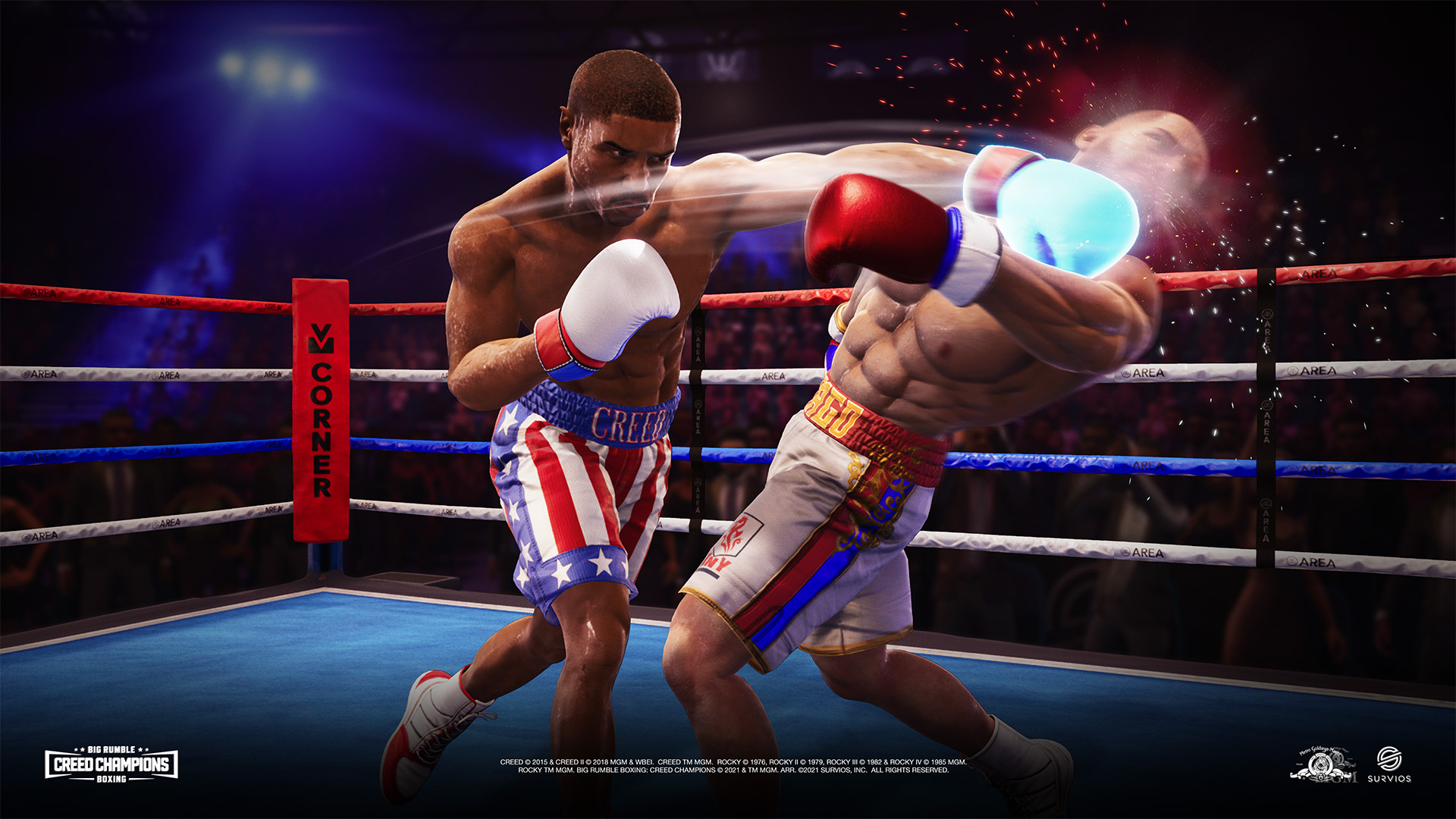 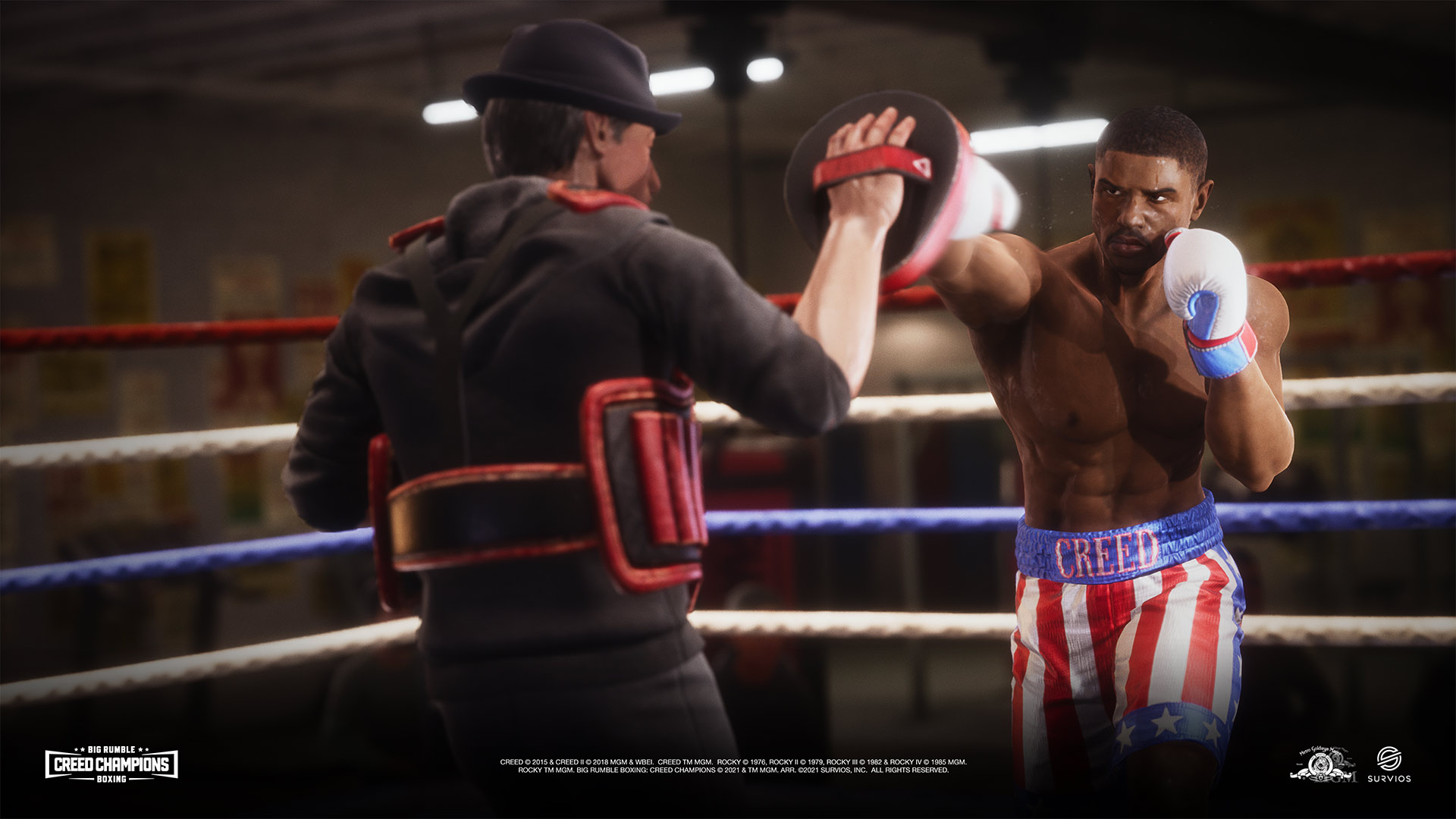