Walking Zombie 2 is a mobile port of a first-person shooter packed full of short story missions with a surprisingly extensive RPG side. With its vibrant polygon graphics and nods to the walking dead, I take a trip into this boxy apocalypse and find out if it’s a walk in the park or should be left for dead. Here’s my review of Walking Zombie 2 on Xbox. 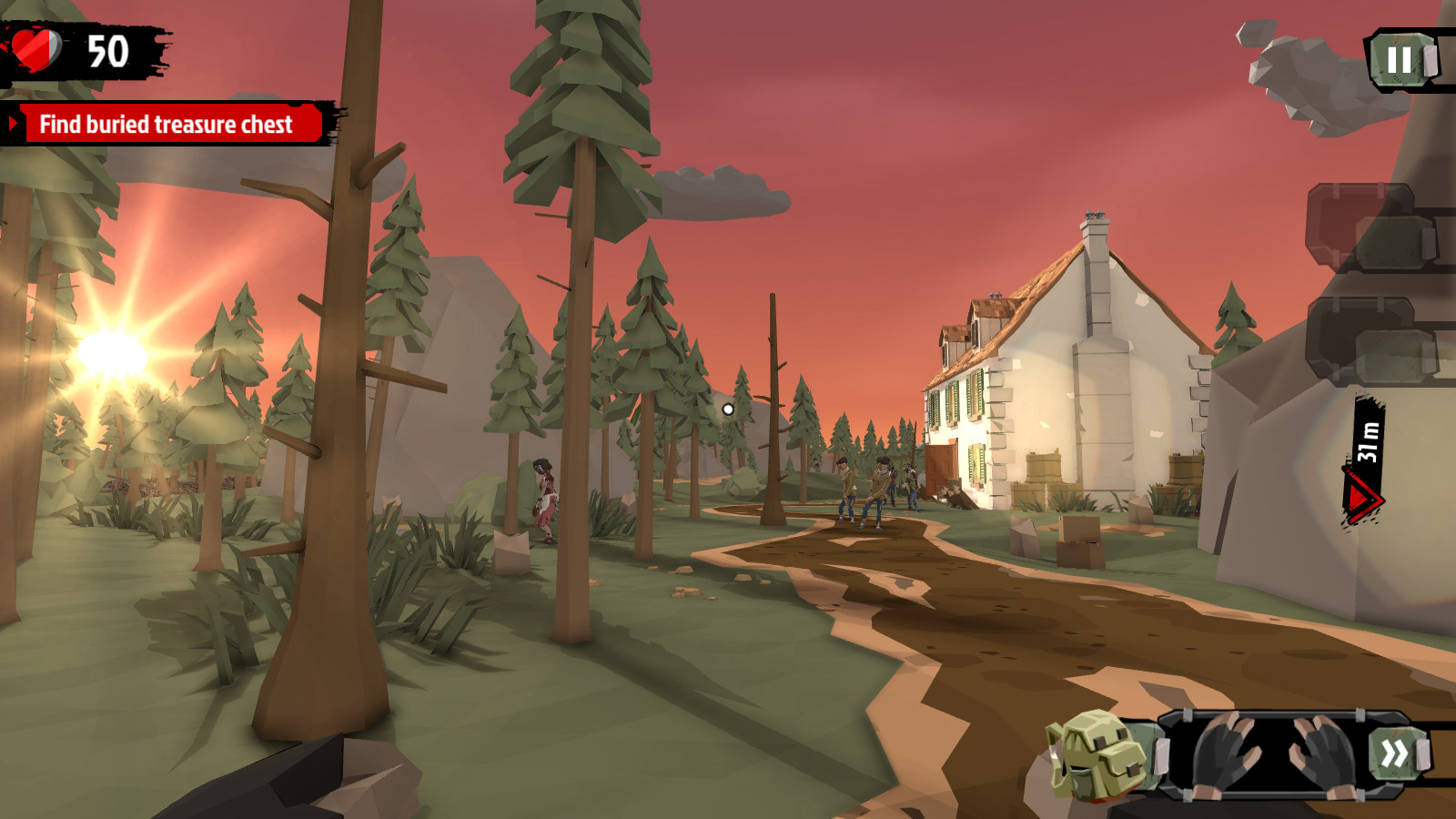 In June 2019, The Walking Zombie 2 was released on Android and iOS to rave reviews. With millions of downloads worldwide, the team at Alda Games decided to port the game to PC and consoles. However, despite the game being great fun, the mobile experience can be felt throughout from its regular requests to rate the game, to its in-game store teasing weapons that can only be bought with real-world money.

But these mobile hangovers are just a small part of a hugely competent game. If you can look past this then there is a lot of fun to be had.

The story in The Walking Zombie 2 follows a group of survivors who discover that one of them (you) is immune to the virus. As such, you are tasked with all the missions outside of the camp. The game loop is highly addictive as each mission can take between five and fifteen minutes to complete meaning dipping in and out is easy. 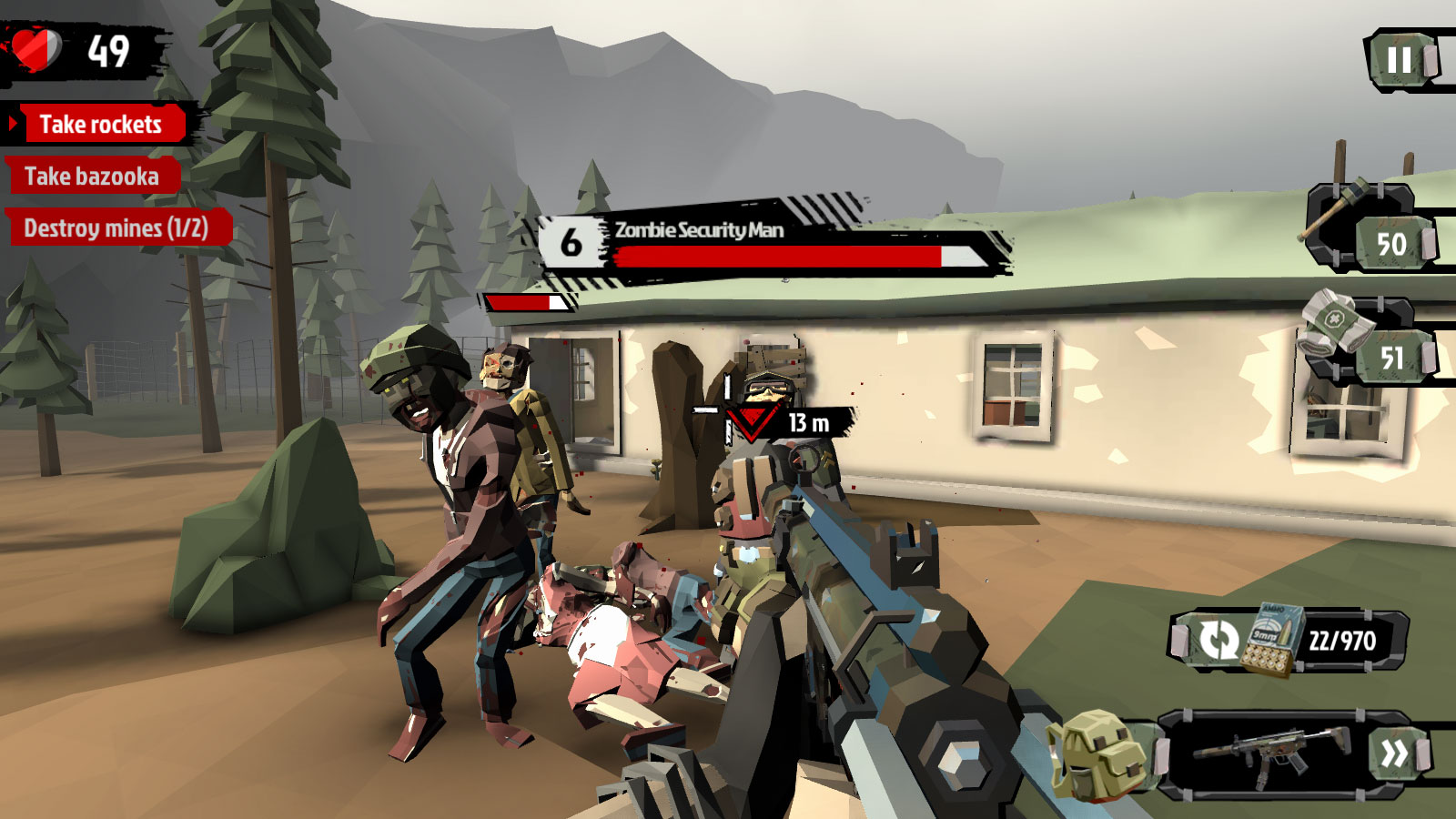 Players will find themselves completing quests including clearing areas of zombies, fixing up locations, rescuing survivors, and collecting supplies. There are also various mini-games such as zombie hordes or minigun turrets to keep things interesting.

These missions gain experience to help you level up and improve your player and camp. I was really surprised at the depth of the RPG side of the game with XP points allowing players to increase various skills including melee weapons, speed, health, and speech amongst others. Perks are also available to boost different skills and buffs. 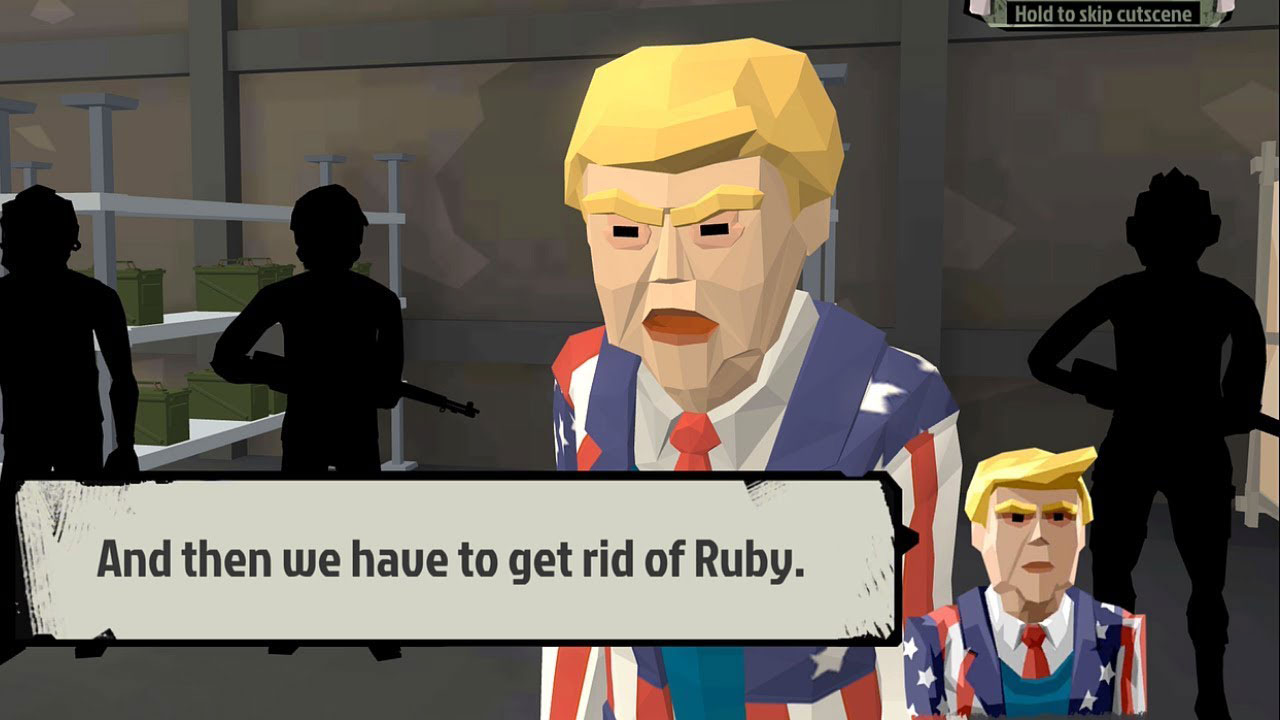 Weapons vary from simple shovels to missile launchers with players able to carry two weapons that can be switched out easily for equipment in your backpack. Whilst there are a wide variety of guns, most are so expensive that you either need to grind for hours or purchase one of the coin packs. When armed, the guns feel pretty good with both a hip-fire option and a more accurate scoped setting. The melee weapons offer a satisfying crunch when smashing skulls. The combination of guns, bats, and explosives makes for a fun game loop that is simplistic but satisfying.

The map grows as you unlock new bases and there are dozens of quests to keep you busy for many hours. The boss battles are a great addition and the inclusion of a Donald Trump-style boss is a nice touch. However, as the game progresses, the boss battles are increasingly difficult, and feels like the game is urging you to buy bigger weapons for real-world money. 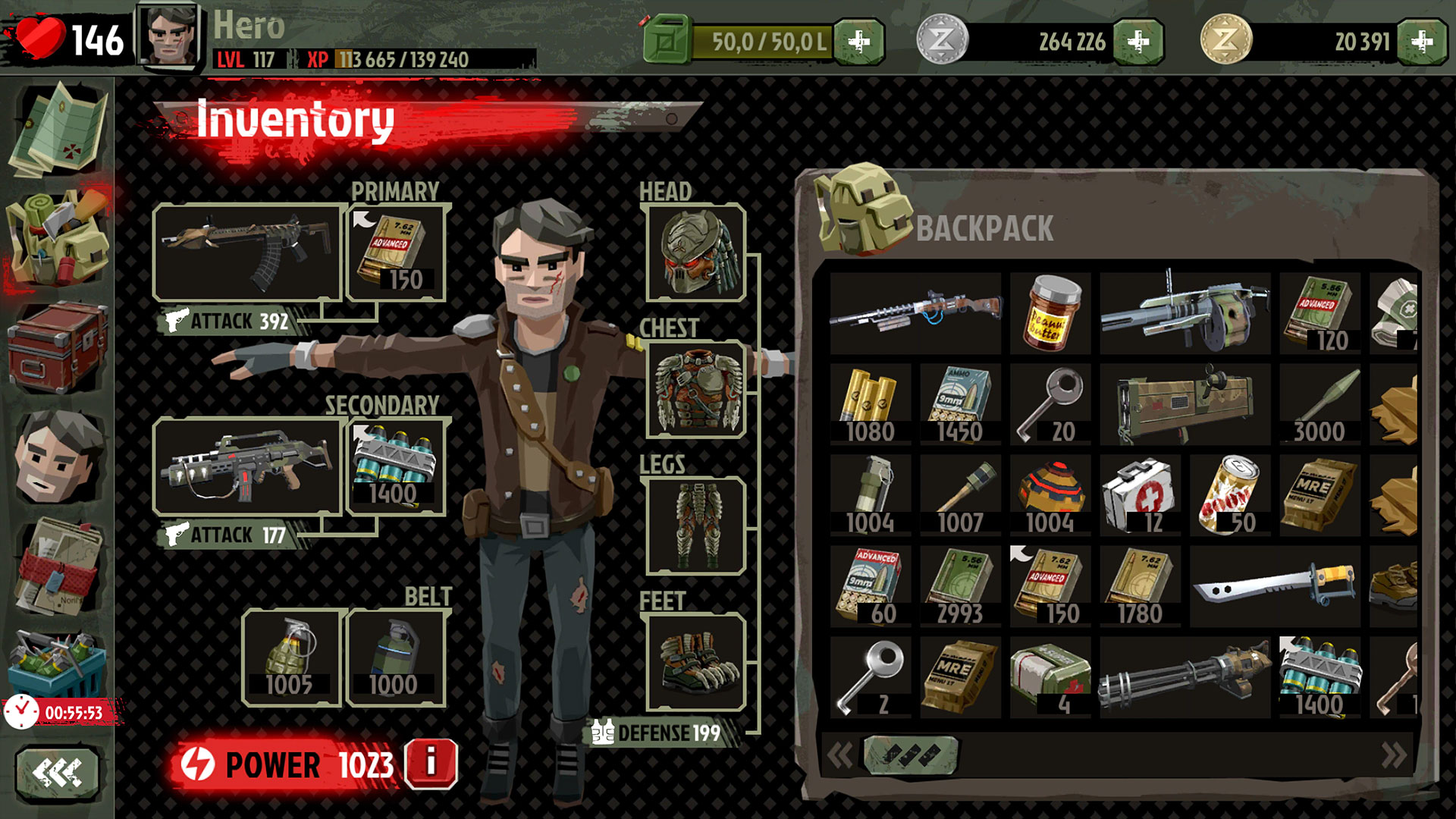 The menu system is extensive if a little cumbersome requiring you to use multiple buttons to navigate the different sections. After a while, this can even become frustrating.

The polygon graphics look great and their simplicity means that game runs smoothly without any frame rate drops in the heat of the action. The zombie models are often repeated but the stylist look doesn’t deter from a solid first-person shooter. Sound effects are good from the moaning zombies to the reloading rifles, but it’s the voice acting that lets it down. The poorly acted cut scenes are so bad, they are almost good ad you will find yourself laughing at their wooden nature.

Overall, The Walking Zombie 2 offers players a fun-filled romp through the zombie apocalypse with simplistic yet addictive gameplay, a multitude of quests to complete, and an array of zany boss battles. The RPG elements are surprisingly deep and there is a lot to grind for. However, the cumbersome menu system prompts to buy more coins or review the game are frustrating and should have been removed during the porting process. If you can look past its mobile heritage, there is a simple and addictive zombie shooter that’s easy to pick up and play when you have pockets of Xbox time. 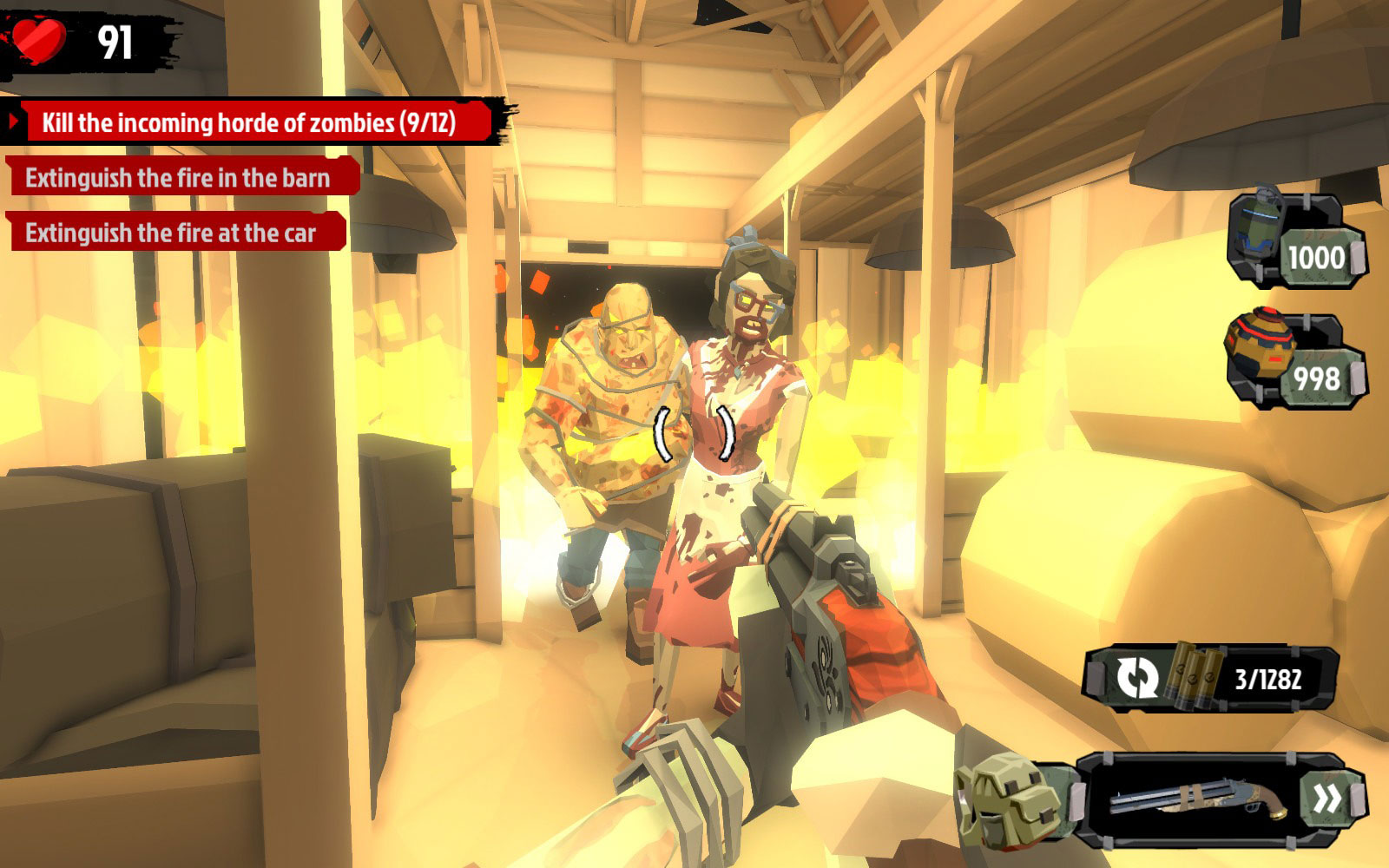