The OUYA Misconceptions: Setting the facts straight about the OUYA

With the OUYA launch date now so close there has been much speculation about the new console. Concerns about its role, its games, and its place on the market have all led to misinformation being shared and some confusion.

Below are some frequently asked questions about the OUYA and some answers aimed to clear up any concerns you or your friends might be having.

This one is easy; OUYA is real and is definitely NOT a scam. The Ouya company was started by CEO Julie Uhrman, a well-known figure in the gaming industry who raised funds on the Kickstarter website to create a new console. Uhrman has a complete and thought-out business plan, and after securing more than enough findings she is now many the dream a reality. She has a great team and has every intention to make the OUYA into a successful and profitable business. In order to make this happen OUYA will need to get support from both the major developers and the slew of indie developers. Those lucky few people who have already got their OUYA consoles (early Kickstarter backers) have confirmed that their new OUYA works just as well as the company said it would.

2. Has anyone got an OUYA yet?

There have been over 60 thousand new OUYA consoles shipped out to early Kickstarter backers which is a massive amount even for the big companies such as Nintendo and Microsoft. Some media coverage has stressed this is later than they suggested but they had never formally set a release date. OUYA has now confirmed that the consoles are being shipped and backers will get them before the end of April.

3. Is OUYA a Google company or affiliated with Google

A lot of chatter on the social media channels have mentioned that OUYA is a Google console. This is not true. The main reason this is suspected is that the console runs on an Android operating system. It does not however have the Google Play App Store but its own user interface.

4. Does OUYA just play smartphone games on your TV?

This is probably the biggest misconception floating around the Internet at the moment. All because it uses an Android does not mean it will only run smartphone games. The Android platform is just the game engine and it allows developers already familiar with Android development to create games for the OUYA. The OUYA games will be significantly different due to the extra screen real estate, the use of a multi-button controller and the extra power the OUYA provides. Of course, many developers may port a version of their Android game over to the new console but they would have to make a lot of tweaks and improvements in order to cater to the new platform. 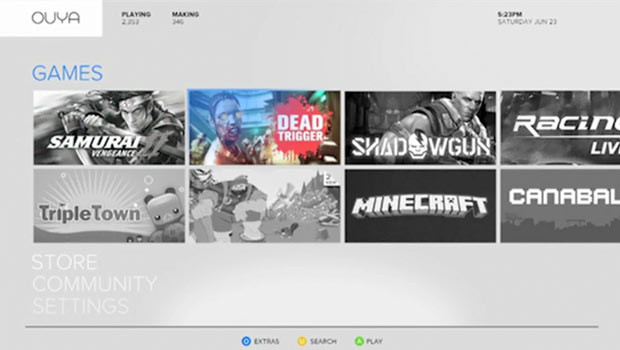 Ben Gilbert of Engadget posted an unboxing video of his new OUYA and unfortunately, his controller didn’t work, but this was an isolated incident. The actual reason was due to the fact the right face plate on the OUYA controller was broken. Ben Gilbert never said that it was broken, but say that “It was unfortunate, that it snapped off”. Apparently, OUYA did this on purpose to show users that the face-plates do come off. As the OUYA controller is different than controllers most users are used to Instead of putting the batteries in the rear of the controller, one battery goes in each side of the controller. In order to put them in easily and quickly, the side face-plates come off. The controllers are supposed to do this.

6. Is OUYA competing with Xbox, Playstation and Nintendo?

There is nothing to suggest that OUYA is trying to take on the big players in the industry The OUYA is currently targeted toward a niche set of gamers who want a cheap console that can be customized, hacked, and moved from place to place quickly and easily. The OUYA will make game development so much more easier and accessible and give most amateur game developers realise their game dev dreams. However, this does not mean that OUYA will not have AAA titles and developers backing it.

7. Did OUYA advertise that it supported emulators?

It’s also true that they will allow emulators in their store but ultimately they are not illegal, nor is OUYA advertising the fact.

8. Does the OUYA have any good games yet?

The majority of the current games are from indie developers who have used the past few months to port existing games over. However, the OUYA Kickstarter campaign did not begin until mid-2012. As it has only been nine months since people began hearing about the OUYA you can not expect AAA games to be out straight away. Bigger and better games are on the way, just have patience.

[Special Thanks to Ed Krassenstein]