After only a couple of hours after the Xbox reveal, I am still trying to make sense of what the announcement means. I will need to mull it over.

My first thought is not a new one but merely a resurgence about the fact that the console war not just about games anymore but about digital entertainment as a whole. The focus of consoles have adopted Apple’s core strategy about creating a digital hub for the home. Apple initially focused on photos, videos documents and music all being in one place. Later this moved into the films, TV shows and even digital books. To the relief of Sony and Microsoft, they left mainstream gaming alone, instead focusing on mobile gaming. When they revolutionized the music industry they had such a head start that they dominated the market (and still do). Their control over the other areas such as films and games was less pronounced which has meant that Microsoft and Sony do have a chance to protect their section of the market. But they do not have long as Apple TV is making it easy to rent and buy movies and TV as well as have subscription services such as Netflix. Both Xbox and PS3 have fought back with their apps and for all intents and purposes they are succeeding. But for how long is unsure, as I know that my movie collection is building up on my Apple TV.

The activation model and cloud gaming

Although I was initially angry at the news that Xbox One uses activation codes to lock games to a console in order to deter borrowing or reselling I soon calmed and understood their reasons. Ultimately, it had to happen, we live in a digital world and having a physical product for a digital entity is surplus to requirement. Cloud gaming is the natural evolution and if Microsoft want to do for gaming what Apple did for music then this the way. However, in order for it to work fully the games will have to be cheap to buy to begin with in order to secure their position. Sony has a strong music and movie studio behind them already as well as a whole of amazing game studios creating Playstation-only titles. Ideally I would prefer a digital footprint approach where digital assets are tied to a person and not a device. This way I could access my games and movies wherever I am an not where my console is. Being able to switch between laptop, iPhone and iPad is great and I would like to see the same happen with games. Imagine if the Xbox, Playstation and Nintendo were merely devices through which games are delivered. For example, why couldn’t I have a digital license for ‘Resident Evil 6’ and play it on any device I am near (such as at a friend’s house) by simply adding my username and password? If the game is out of that device, why not have access to it. 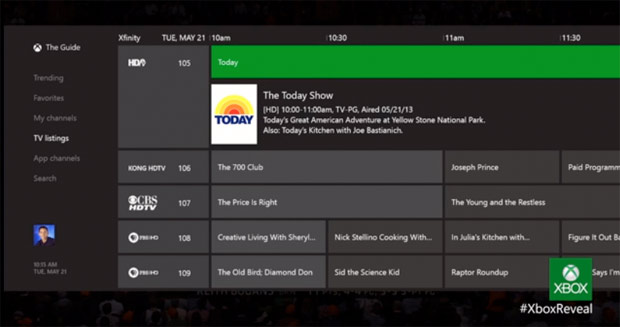 As well as the new console there has been some changes to the Kinetic device that have not only changed the proportions of the casing but also added further tweaks and updates to the motion and sound sensing apparatus. The Lumiroom addition looks very cool and it would be interesting to see it in action for real as its hard to tell the impact from the promo video but either way, it’s a great idea to extend the game out more than just getting a bigger TV.

Other improvements of note are the addition of extra HDMI ports in order to plug in your satellite connection, the faster USB 3 ports and the loss of the power block, instead opting for a self contained system. The addition of a 500 GB hard drive is OK but they could have been more generous if they expect us to have all our HD movies, TV shows, games, photos and music.

Finally, I just hope they sorted the fan issue. No one saw the device in action but IGN did comment on the size of the grill for the fan. If this device is supposed to be the ‘always on’ entertainment system then it needs to be quiet otherwise people will quite simply turn it off.