Monetization of the Gaming Industry: Microtransactions 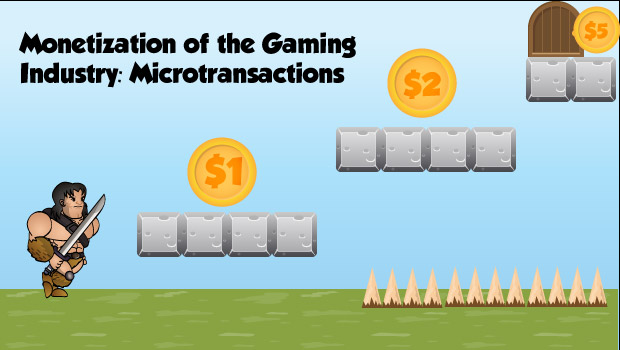 £30m is a lot of money to consider. Here, it’s what Windows Phone UK claims children are accidentally spending in the game without their parents’ permission. This is, of course, nothing new to the gaming industry. Or is it?

The gaming industry has almost always been a capitalist, commercial-driven industry. The largest titles are AAA games with massive studios designed more for profit than enjoyment. This is why there is such a lovely indie community. But within these games, be they online or not, there have always been additional fees. You can buy the game from a local dealer, or you can buy a new and shiny edition for more. You can pre-order the collector’s edition, or buy a second version because it’s a new limited edition. In game benefits for collector’s editions, and bonuses for payers of extra-fees are just some of the ways these companies try to get more money from us.

Commercially-driven industries can be healthy for a community. It can drive competition and lead to better products. But sometimes there is a line that should never be crossed, when capitalist business strategies go too far. Is the gaming industry faced with one of these nefarious blights on our enjoyment? Have companies gone too far in their penny-pinching ways, swindling us out of our hard earned cash? As was said, £30m is a lot of money, and that is what is paid, accidentally, by children. Let’s take a look at the most potentially insidious reaches of the industry:

Last millennium closed with a troublesome app, I’m sure you remember it, RealArcade. It was a tagalong program usually installed unintentionally as a third-party offer through WinZip or something else completely unrelated. It played like a jukebox. You opened it up and found access to classic games like Bejeweled, some clones, or Popcap games like Insaniquarium. Well, that company since evolved into Big Fish Games which sprouts game series such as Drawn, and the Mystery Case Files. This company has recently entered into the currents of social networking. Keep this in mind.

Zynga is a company we should all be familiar with by now. They produced FarmVille on Facebook. FarmVille is a game where players set out to build and upgrade a farm. That’s it. However, there is a level system that ranks you. Hence, competition, and each new feature to speed up experience gaining is locked until you reach a certain level, hence, a slowed-down gameplay. This is another example of social network gaming. But more important is the energy system. We’ll come full circle to monetization in just a bit.

Game commentary website and community Penny Arcade host the brilliantly popular Extra Credits. Season 5, episode 4 is about energy systems and claims they abuse their gamers. They functionally limit the player from their namesake, that is to say, from playing the game, but offer a quick-fix real-world payment turnaround to bypass this downtime once the energy has been spent. Along with a competitive structure of hyper-hindered advancement, these payed bypasses become an insidious and abusive treatment of players. No longer would many Game Studies communities consider the program a “game”.

In the same series, Extra Credits, in Season 2, Episode 25 speaks of microtransactions in generalities. They posit that microtransactions are a result of bad commercial practice that is propagated by consumer ignorance. They explain that the first and foremost difficulty, revealed through consultation with gaming industry giant EA Games, is the fundamental perspective that the consumers are the enemy, to be overcome by the corporate business.

Of course, microtransactions aren’t a purely insidious construct. They have their role in the industry as well and can be done in a completely healthy manner.

Microtransactions aren’t an inherently terrible thing. They do, however, have a great potential to be used wrongly, as we’re seeing with companies like Zynga, Supercell, and Big Fish Gaming. Monetization of video games isn’t a crime, either. What a crime is an administrative perspective that consumers are the enemy. Monetization with the community to build the community is the way to a broader, and more positive experience for consumers and creators alike.

Author: Jason Falls is a gambler. He loves to share ideas for gambling on various blogs. He writes this post for Butlers Bingo.