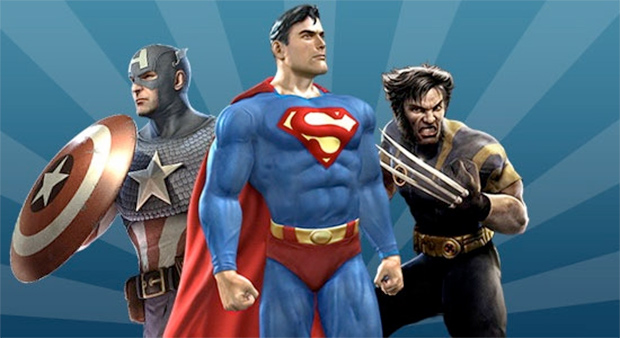 Gamers have a love/hate relationship with superhero games over the years. It used to be that every big blockbuster would have an equally exciting video game to accompany it, but it seems that some where around the millennium they lost their way and became a bit of a running joke in the industry. Thankfully, more recent entrants from the likes of Rocksteady and Lego have revived our love of Super hero games.

Lets start with a flashback

It started in the 80’s when the original Spiderman game on the Atari 2600 gave people a taste of being the webslinger himself. Whilst it was revolutionary at the time, it wasn’t until the late 80’s when we saw full colour games that really brought them closer to the comic books. Sadly games such as Spider-Man and Captain America in Doctor Doom’s Revenge on the Amiga really dented the genre. Visually it looked great for the time but jerky controls and only having one life mad the game very unpopular.

However, in the 90’s super hero games were worth getting excited about and gamers enjoyed games such as the following: Awarded the best licensed game of 1992 this fantastic side scrolling beat-em-up was one of the first titles that really made you feel like Batman. The game was out across multiple platforms with the Mega CD being the bestseller and the SNES version being my personal favourite.

This game was so popular that it was said that two thirds of all Megadrive/Genesis owners had this game and it single handedly convinced the management at Marvel to renew its license agreements with Sega. The game not only had the Kingpin in but over 15 other notable enemies to battle against as you attempt to save New York from a nuke. Those lucky enough to own a Mega CD copy were treated to multiple endings depending on how you played the game.

This six player side scrolling beat-em-up had the kids queuing in the arcades back in the 90’s. Players could choose to play as one of six X-Men: Cyclops, Colossus, Wolverine, Storm, Nightcrawler or Dazzler. Their mission, to stop the evil villain Magneto from wreaking havoc on the world. Super powers, explosions and more heroes and villains than you can shake a sentinel at.

Then it all changed…

Something seemed to happen at the end of the 90’s when the quality in Super hero games dropped dramatically and games such as X-men Legends tried to turn our beloved arcade game into a 3D roaming beat em up for home computers and failed miserably. Soon after that monstrosity we were treated to The Punisher game which was generally bland and audibly horrific. It’s only redeeming feature was its torture mechanics. After a slew of other failures we were then treated to The Incredible Hulk Ultimate Destruction which signaled the beginning of the upturn for super hero games. This was coupled with the positive reception of the Spiderman movies and it seemed that super heroes were loved again.

Finally, at the end of the decade we started to see more quality games creep in and the UK company Rocksteady release the first in its Arkham Trilogy. The Arkham Series that include Arkham Aslyum, Arkham City, Arkham Origins (not by Rocksteady) and the soon to be released Arkham Knight really give the player a sense of what it is to be Batman. From hiding in the shadows to the nitty gritty of detective work, players soon realise that they can’t take a bullet and must use tools, cover and swift fists to defeat the army of iconic enemies. The Lego games have put their amusing spin of a wealth of licenses over the years from Star Wars to The Hobbit so when they were given free reign over the Marvel Universe we knew we were in safe hands. The game they delivered was everything we expected and more and the sheer number of characters available will mean you keep revisiting this game over and over. Injustice – Gods Among Us

Super heroes have been added to fighting games since the dawn of gaming in in many cases they work really well. Street Fighter teamed up with Marvel to created the Marvel Vs Capcom series so it was only a matter of time before DC teamed up with Mortal Kombat to create a dark and epic 3D brawler that would knock our super socks clean off.

There is no denying that we all love Super heroes and know Disney own Marvel, we are sure to be inundated with super hero movies for years to come. The only question is whether the associated games will live up to the quality we have come to expect over recent years.

Let me know your thoughts in the comments section.