Review: Sir, You Are Being Hunted | Steam

A brisk walk through the British countryside is certainly an experience. Lush green pastures, farms, rural villages, and ancient stone circles litter the landscape. As the soft breeze meanders by, you hear the unmistakable sound of a bugle horn symbolizing the start of the fox hunt. This time-old tradition by the British gentry first appeared as a way for people to protect their farmlands from the pesky foxes.

However, as the first noble hunter reaches the crest of a nearby hillside, the classic red and black attire has been replaced by chrome and steel. His mighty stead reflects not that of a grand national participant but a hovering metal trash can with a robotic head.

It soon dawns on you that you are the fox, and it is YOU sir, who is being hunted…

Sir, you are being hunted, is a first-person survival game set in rural England. The levels are procedurally generated and can vary from rural farmland to abandoned industrial parks. The aim of the game is to collect various power stones (relics) that need to be delivered to various stone circles across the landscape. Once all 24 have been delivered you can transport out of the dreary hell that is rural England. With grey skies, periodic fog, drizzle, and flat colours it has captured the British countryside perfectly.

The game sees you scavenging for food, weapons, and tools whilst being chased by a posse of robot hunters that walk, ride robot horses and float around the island in hot air balloons. 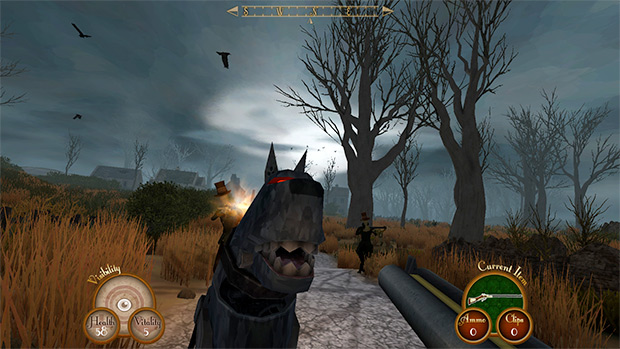 The game is a sew-saw of patiently waiting in long grass planning your way around a group of robots to intense chases where you are outmanned and outgunned. Weapons are few and far between and ammo is like gold dust. When you are chased you truly feel like you can’t win. Only by causing distractions sneaking around and having good eyes can you gather the relics needed to beat them. There is an array of building to loot but sadly you can not enter any of said buildings.

I love the concept and escaping unharmed from a firefight is deeply satisfying, however, this game is for those with both an abundance of time and patience. It can take a while to circumnavigate the islands and whilst the graphics are pleasant it can get a little ‘samey’ after a while. The looting mechanic is interesting as buildings are mainly full of rats, bones and dubious food but the ‘take all’ button is very tempting when being pursued by the tweed-wearing hunters. 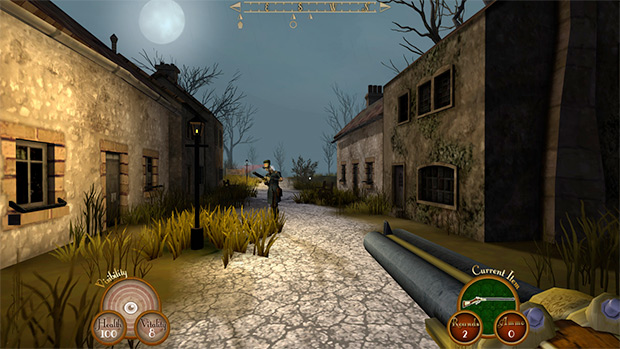 My biggest gripe has to be the total lack of story, which is immensely frustrating as the world, the robots and the abandoned villages are truly intriguing and if the game could answer, why you are there, who are the robots and why you should escape then the game would truly be worth talking about.

The core game has been also extended by mixing up the landscapes as well as offering the player the ability to change their starting character from the basic unarmed aristocrat to a pistol-wielding soldier. However, the best setting for survival horror fans has to be unarmed and lost in rural England. 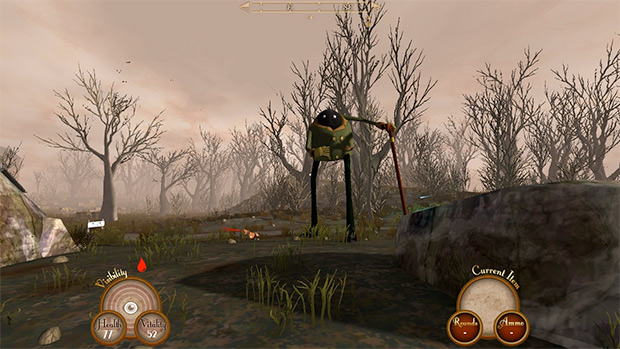 In the positives column, Sir You Are Being Hunted is original, has solid graphics and atmospheric sounds and ultimately, every game is different thanks to being procedurally generated. It’s fun when you are playing, but it can get a little boring after a couple of hours. Strategists and lovers of stealth games will get more enjoyment out of ‘Sir’ than more casual gamers but I would suggest picking this up in one of the Steam sales as it is fun to play but probably a little overpriced at £14.99.