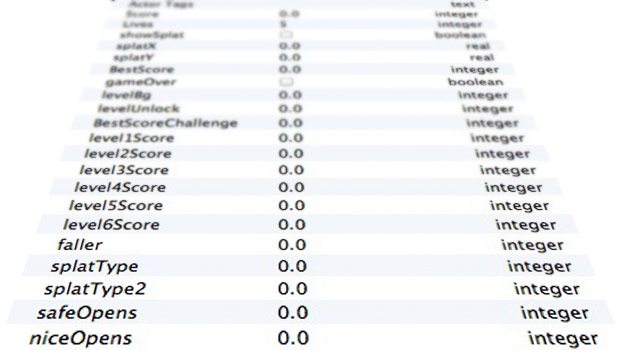 So I’ve finally started the development process. By this, I don’t mean writing lines of code but opening Gamesalad and starting ‘programming’ the logic.

I am starting with an iPad version and then the iPhone version. I think the experiences will be very different depending on which you play, that’s for sure.

A new feature crept in within an hour of the development. I decided to add pull ‘zones’ which consisted of four areas on the screen that designated whether your ‘chute pull’ was safe, nice, gutsy or extreme. The premise being that the lower down you open the chute the more points you can get.

Music already??
I know I’m jumping the gun a bit and you’d be right if you think it’s too early to think of SFX and music. But I am a man of opportunity and don’t like to pass them up.

I usually use Stormy Studio for my game music for the simple fact that he’s awesome; you only need to check out the music on Dragon Fire: Una’s Quest to hear some fantastic tunes. I also knew that he was working hard on the ‘one game a month’ initiative as well as launching his new social network for gamers TOTGB.

But it was twitter who put me on to Gavin Harrison Music and his game music portfolio blew me away. He had a great mix of chip tunes, bouncy tunes and high end orchestral movie style scores which was hard to ignore. I was lucky enough to interview him about his music, games scores and indie gaming which will be posted soon. So to cut a long story short, I hired him to create the music for my first game of this ‘one game a month’ challenge. I am very excited to have professional music for my game but it does add to the investment cost which is creeping up by the hundred.

The decision to pay for original music was not taken lightly. I had been eager to try out soundsnap after I saw a few months back that it has music loops and sound effects for about $20 for 10 clips but upon revisiting yesterday I now see that all of the music has been moved to a different website with a much heftier price tag and the quality of the cheap sound effects mirrors the cost more than it used to. It’s one of those situations where I wish I had stocked up my library when I had the chance.

Something I realized when I had almost finished writing this update was that it actually wasn’t to early to be thinking about music as I needed to factor in time for external contractors to do their part. One week is short notice or any creative, especially good ones, as they need to time you in so a word of advice would be to make sure you give external contractors a full brief early and give them the time they need.

Attributes and variables
Determined to not build on the fly like previous projects I tried to note down all of the attributes I would need to be aware of before I even opened Gamesalad.

At the last count there was over 30 attributes which covered high scores for different levels, counters for how many times you open your chute in different zones, and awards for when certain scores are reached. Pre planning the attributes didn’t take long at all, but has turned out to be really useful. I found that you can group them together, making selecting them later on easier, faster and more logical. So if there is any lesson to be learned from this post, it is to brainstorm all the attributes you might need on paper first. After which, you can sort them into a logical order speeding up the game development process.

Over the half way mark
With less than two weeks left I think I will be cutting it fine. Especially if I want to get more of Deep Space Dookie done at the same time.