It feels like an age has passed since we last saw a Star Wars game that really hit the mark. However, looking back at previous titles I am pleasantly surprised; The Force Unleashed was OK, Lego Star Wars was fun, KOTOR was good at the time and the other Battlefront games were great. Further back than that I can still say that I enjoyed the Masters of Teras Kasi and the Super Star Wars Trilogy on the SNES still hold up well. So why does the new Star Wars Battlefront feel like it has been a long time coming – Here is my first impressions of the Star Wars Battlefront Beta… 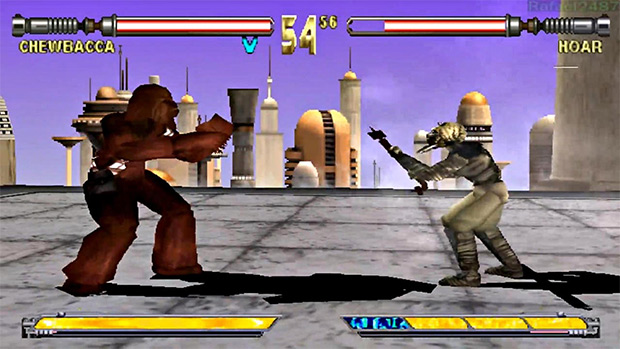 The new global beta had three modes, a co-op ‘single’ player campaign set on the lava covered world of Sollus called Drop Zone, A survival co-op mode called survival mission set on Tattooine, and an all out war zone on Hoth called Walker Assault. The game can be played in first or third person. I chose to play in first-person as I forgot about the third person option and there was no prompts.

Having been prompted to play the Sollust level first I dived straight in and was pleasantly surprised, EA and Dice have nailed the look and feel of the star wars universe and the graphics and sounds a fantastic. 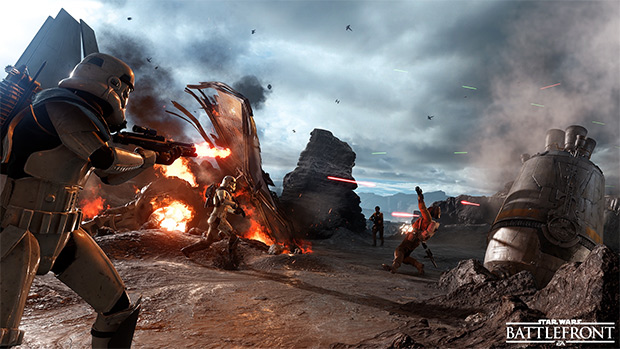 ‘Survival Mission’ on Tattooine is a single or co-operative mode where you hold off waves of Imperial Stormtroopers, AT-ST Walkers and TIE fighters coming in to attack. The towering cliffs that surround the map make visibility difficult and the level mixes open spaces with close quarter combat. The Jetpack gives it some much needed verticality and taking down a walker single handed is pretty special. 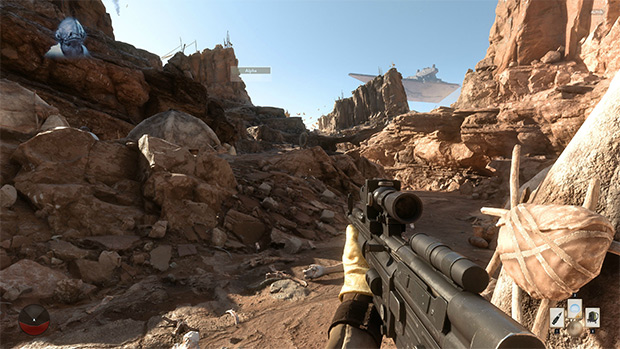 ‘Drop Zone’ on the all new planet Sullust, sees two teams of 8 players find and defend escape pods that are crashing down to earth. The side which gets the most, wins. ‘Drop Zone’ is a little more close-quarters by comparison. There’s an Imperial Shuttle in the centre of the map and plenty of lava pools to fall into. On each map there are weapon pick ups that range from grenades to ion cannons. 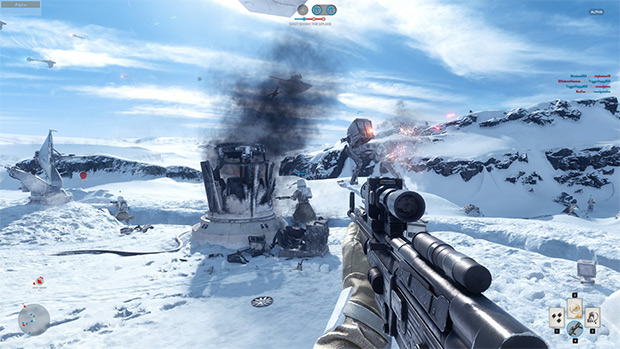 By far the best map in the beta had to be ‘Walker Assault’ is set on Hoth. This massive map has iconic Rebel fighters and troops fighting against the Empire’s AT-AT walkers. The aim is to destroy the AT-ATs (or, as the Empire, defend them), and gain control of Uplink points for additional aerial support. This mode supports up to 40 players and despite being lots of fun was massively unbalanced. At first I thought this was because the outcome of the game was already decided but after a few play through I realised that if the rebels didn’t work as a team the uplinks points were incredibly hard to secure alone. Also, the Empire have a number of long range weapons (such as the At Ats which can take out swathes of rebels with pinpoint accuracy. Dotted around the map are vehicle pick ups such as tie fighters and Y Wings as well as hero cards that allow you to play as Darth Vader or Luke Skywalker.

There are two types of unlocks in the beta – Star Cards and Blasters. Star Cards are abilities and items you can take into a match, while your Blaster is your main weapon.

You gain access to more of these by progressing your level (up to rank 5 in the beta), and spending Credits (earned by playing the game and completing challenges) to then unlock them. Star Card unlocks are shared between Rebels and the Empire.

There will be 12 multiplayer maps will be available at launch. These maps will feature five locations from the Star Wars universe: Hoth, Tatooine, Endor, Sullust and Jakku.  A $50 season pass will have additional maps, skins and hopefully a small single player campaign based on the existing maps.

I am excited about this one despite not having the time to invest in it to become any good.