I seem to have taken a trip back in time this week as I received copies of the early-eighties style shooter Hyper Sentinel and the nineties-inspired beat-em-up Raging Justice.

I was no stranger to Raging Justice after enjoying it at EGX back in 2017 and playing it for some time on an old-stool arcade cabinet. Raging Justice is a homage to games such as Final Fight, Golden Axe and Streets of Rage and for only £10 it is worth every penny. 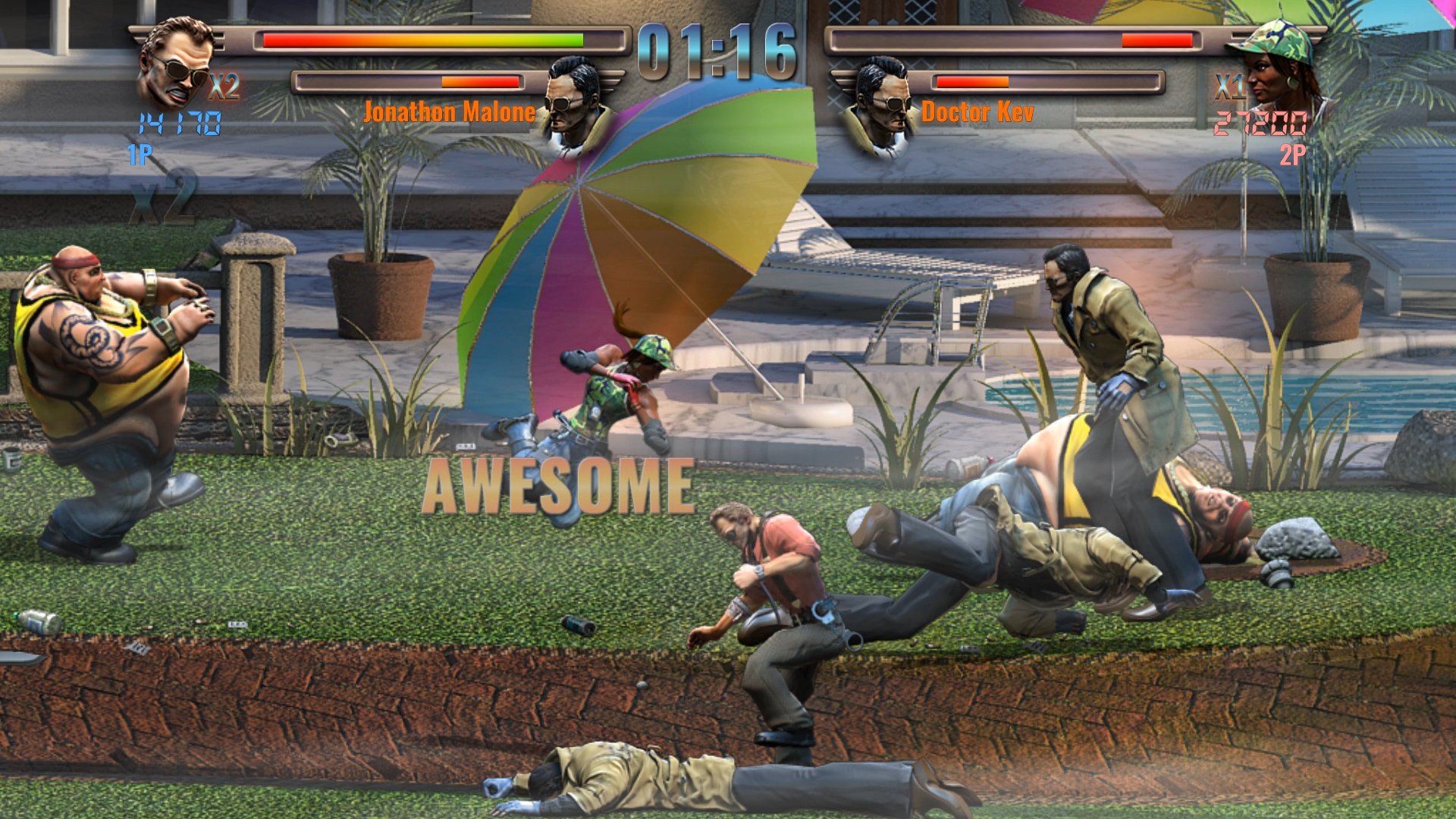 Being a child of the nineties, I grew up with a feast of side-scrolling beat-em-up, from the well-known Final Fight series to the more random Pretty Soldier Sailor Moon. I bashed my way through Cadillacs and Dinosaurs, sliced my way through Ninja Turtles and punched through The Punisher, Batman and the X-Men. I loved every minute of it. So when I got my hands on Raging Justice, I was like a kid in a sweet shop. The husband and wife duo, Nic and Anna Makin are ex-Rare developers and have obviously been brought up on the same over-the-top macho action movies and games that I was and subsequently channeled that lost youth into a nostalgic journey through Big Smoke City.

Raging Justice knows exactly what it is and doesn’t try to be anything but. From a kidnapped Major, a city full of repetitive thugs, over-the-top bosses and a thumping guitar riff, the game looks and feels like a lost ROM that has been ported to the Xbox One. Like the games that inspired it, players can choose between three characters that include the hard-nosed cop Rick Justice, ex-military Nikki Rage and brought-up-on-the-street Ashley King. 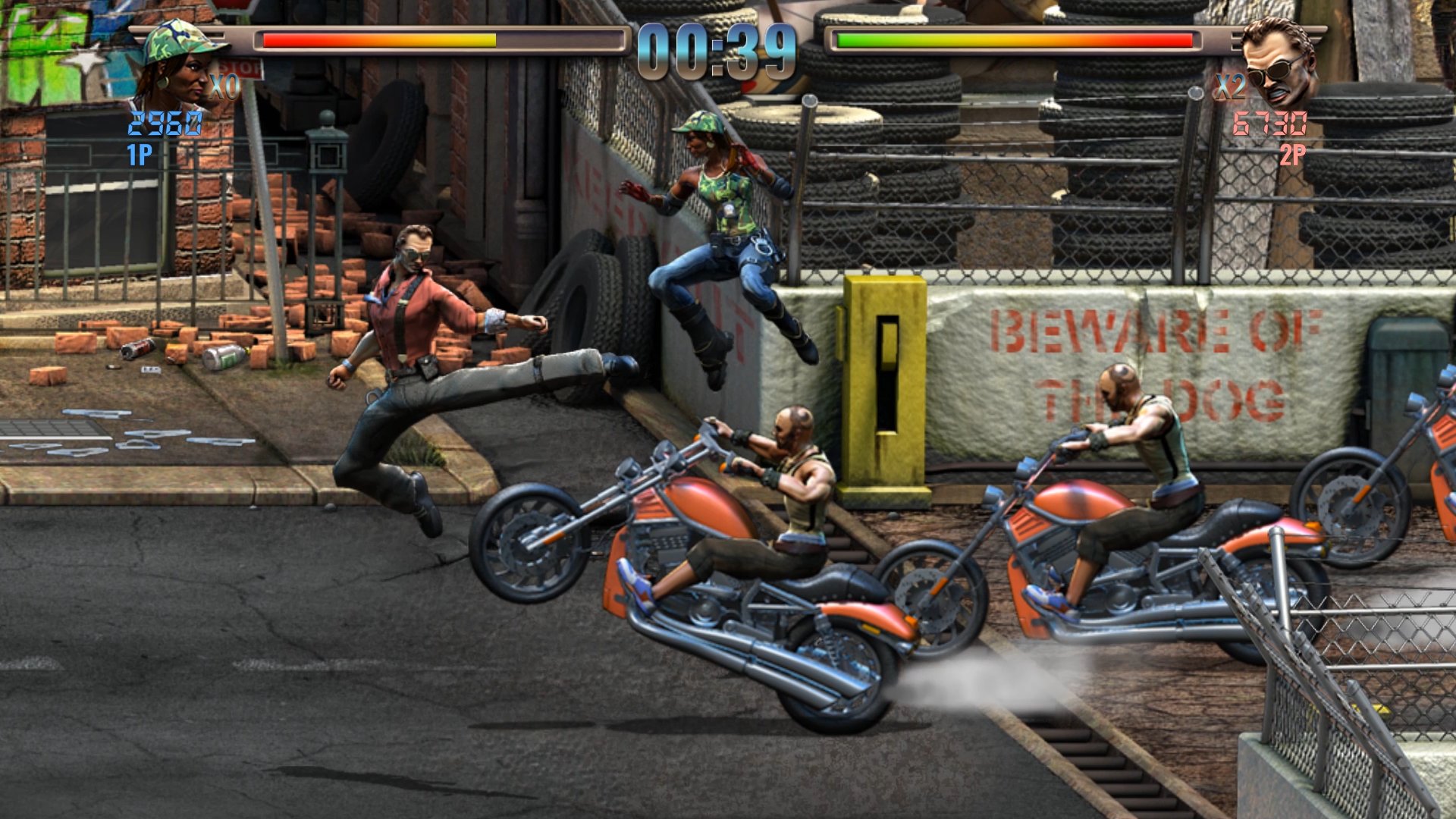 Visually, it looks the part, with stylistic stop-motion effects wrapped in full HD graphics. The animations are fittingly jerky and the backdrops suit the overall theme. Sound effects are perfectly passable, but the voice acting is disappointingly sparse. I would have looked to have the purple-clad Pimp or Junkyard Gimp have a line or two. The in-game music feels slightly repetitive in places, but the title track definitely has the quality you would expect from Steve Burke (Kameo, Viva Piñata etc).

Gameplay is generally fun and fights feel meaty, but there are some occasions when you might be hit from offscreen or get stuck between thugs on both sides depleting energy fast. Thankfully, the save system and ability to use continues means you can drop in and out and progress at a steady pace.

Raging Justice also enjoys couch co-op should a friend be around, as well as online multiplayer for those playing from afar. The online leaderboards give players to keep coming back and the array of level-specific goals mean you will want to replay levels in order to improve your overall rating.

The arrest mode adds a new dimension to the genre, as players can choose to crack skulls or arrest dizzy enemies, which count towards you being a good cop or bad cop. The different paths open up different weapons such as shotguns or changes if they drop health-boosting food or point boosting money. 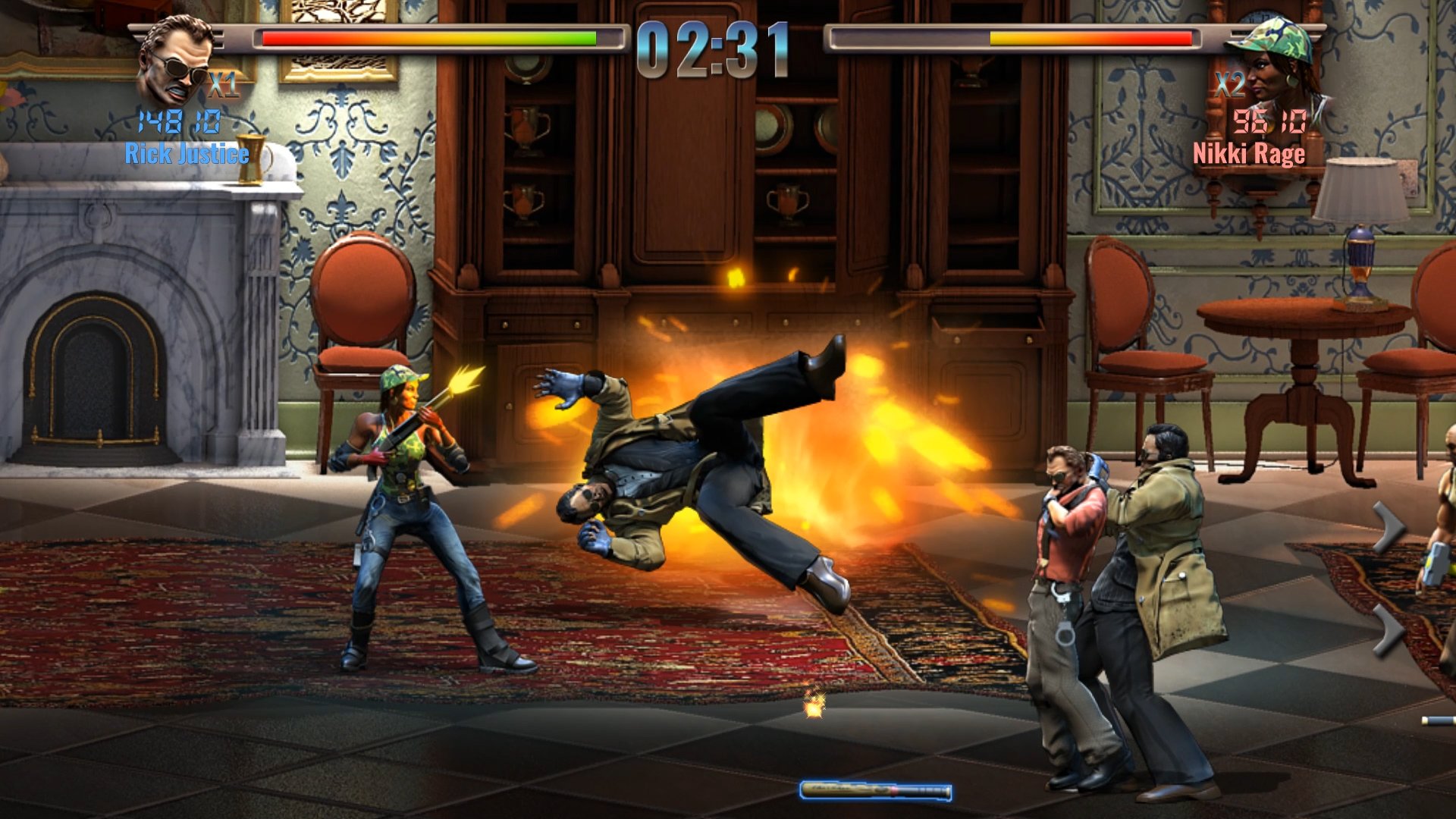 Outside of story mode, there is another mode called Brawl that lets you battle through wave after wave in various spots from the story. There are no challenges or warrant system here, however, there is scoring and a ‘best time’ counter, so you can use this mode to test your skills against other players around the world.

Overall, Raging Justice is a gushing love letter to classic beat-em-ups of the 90’s with a look and feel that perfectly suits the era. The arrest mode is a nice touch and the in-game challenges to help improve the longevity. However, I would have liked slightly more variation in enemy types and some breakout levels such as car smashing or elevators to change the pace of the game at times. Raging Justice certainly won’t be for everyone, but for fans of the genre and retro gaming aficionados, this will be a nostalgic trip down memory lane to a simpler time when one muscle-bound vigilante could take on the mob and clean up the city.

View on the Xbox store >>