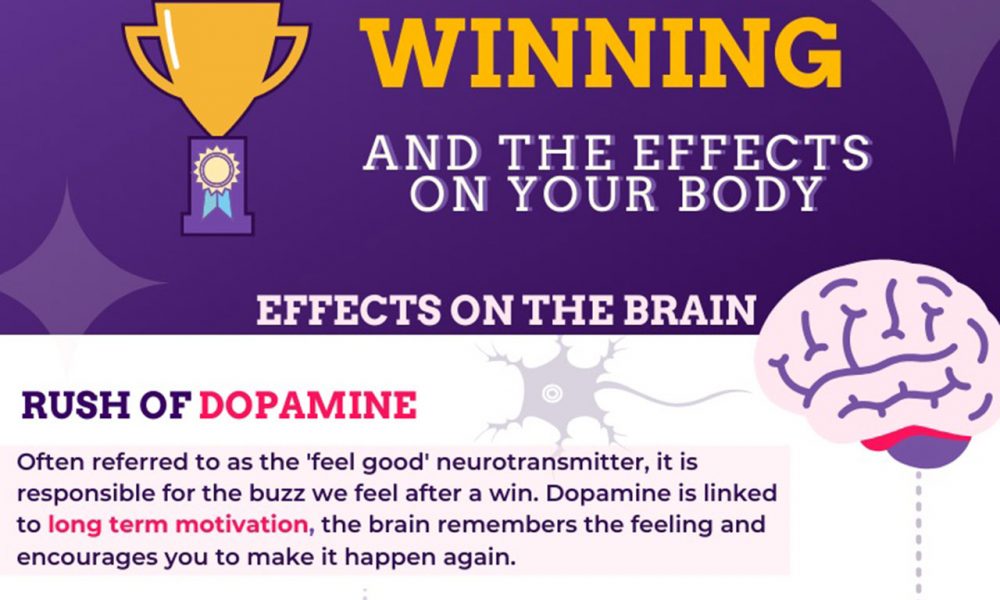 Playing video games is a popular pastime for a lot of people. In the UK, around 32 million people regularly play some sort of video game. However, what many of us don’t realise the extent to which our brain’s chemistry can be altered through playing these games. Research to date suggests that playing video games can change the brain regions responsible for attention and visuospatial skills and make them more efficient. So, despite parents and grandparents insisting that too much screen time will turn our eyes square and our brains to mush, it appears that actually there are many benefits to playing video games.

How The Winner Effect Makes Us Smarter

Winning, whether that be in a game of PUBG or at a tennis match, has been found by researchers to make us smarter overtime, and more likely to win again the next time around.

The “winner effect” is a term used by biologists and researchers to describe how an animal is far more likely to win against stronger competitors after having first won against a weaker competitor. In part, this is due to the rush of testosterone and dopamine that accompanies each win. Researchers have discovered that this chemical surge not only has short-term effects on the animal, giving them an increased sense of self-worth and self-value, but also longer-term effects. These testosterone and dopamine hits make the animal more much confident, competitive and even more intelligent in the long-run, as they learn and retain information from their successes. As they learn how to win, the chemical make up of their brains changes.

It is now understood by researchers that the “winner effect” is not only relevant to animals, but also to people. It has the potential to make us addicted to winning, because we crave that hit of dopamine again and again, and because as we get better at a certain thing, winning at it becomes a more realistic outcome.

So, if you beat a mate who isn’t too good at Battlefield, that rush of testosterone and dopamine that you’ll get will mean that next time, you’ll be much more likely to win against someone who’s a lot better at the game. As you become better at a certain video game, you will most likely enjoy playing it a lot more because as you achieve more wins and success, your brain will continue to get that vital hit of dopamine. This will make you want to play more, and in turn you will become increasingly better and better at it, until, in theory, you almost always win. For this reason, video games are known as great brain trainers. [Playing action video games can potentially increase gray matter volume in the brain. A study compared 27 regular expert video game players with 30 amateur players who played infrequently and didn’t perform as well in games. In the same way that an animal will become smarter, more competitive and more confident through winning against its competitors, people who play and win at video games will also experience similar changes to their brain’s chemistry.

Best New Bingo Sites have created a helpful Infographic, which explains all the impacts that winning can have on the human brain and body.

How Dopamine Hits Are Linked To Long-Term Motivation

The boost in dopamine that you receive when you win at something, your favourite video game included, not only has the potential to make you smarter, more competitive and more confidence, but it also can potentially help to make you a more motivated person.

This can happen because our brains crave the “feel good” buzz that dopamine gives us, and our brains know that once you achieve another win, you will experience that same “feel good” buzz again. This is why many gamers can happily play video games all afternoon, or even all day, without getting fed up. However, it has been suggested that the motivation you build up from playing video games can be transferable. It may lead to you being a more highly motivated person in general, making you more likely to have success in other areas of your life too, like your education and career.

Whilst you probably shouldn’t spend all your free time on video games, it seems that playing them can actually be pretty beneficial to the growth and development of your brain. It appears that they don’t in fact turn our brains to mush, but make us instead more intelligent, more motivated and competitive, and more likely to succeed at not only our favourite game, but also other key aspects of our day-to-day lives.