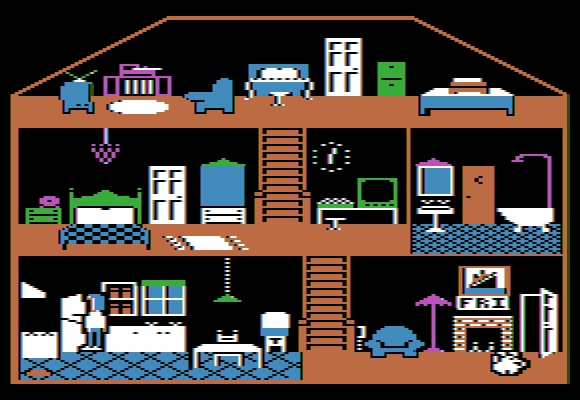 As the 80’s week comes to a close I just thought I’d say a huge thank you to all the readers for sticking with me these last few days. Obviously there is so much we could have covered and we tried to vary what we did.

Below is just the final spill of content and articles we have of that great decade.

Before Sims and Before Spore there was Little Computer People.

Back in 1985, decades before The Sims and Spore a young software house called Activision created a mind blowing and innovative game concept called Little Computer People. Each lovingly crafted disk held a different personality on and users would boot up said disk and see a one screen house devided into various rooms. Inside the house would be a small character who would eat, sleep, play piano and even take a bath. Other actioned included watching TV, talking on the phone and cooking and you could quite happily watch the little guy potter around the house all day.

The ‘game’ also included text commands so the user could interact with the Little Computer Person but sadly he would very rarely do as he was told and continue about his business as usual. After a while it would get pretty boring watching the 40 pixel high character walk around the screen so people tended to wander on. This game however also had the ingenious idea to have the main character periodically tap of the screen to make sure you were still concentrating.

Although the little guy had limited AI he could still suck you in to his busy little world and probably laid the foundations for the massive juggernaut that is the Sims and the hugely popular Spore.

Just remember though, before those genre defining games, there was Little Computer People!

And now for some more lists:

Top 5 80s revivals bought back in the Noughties