Possible E3 Leak Shows Games Due To Be Shown 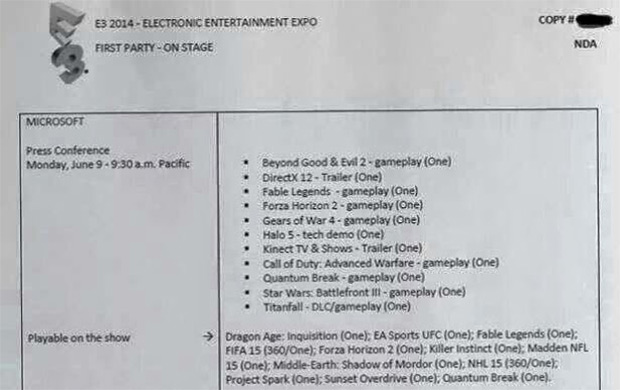 A printout is currently circling around the internet that suggests a possible line-up for the first-party systems, at the upcoming E3 show in June.

Held in LA, E3 is one of the most anticipated game shows of the year and is the launchpad for a myriad of titles. Microsoft, Sony and Nintendo are all dropping hints about announcements due to be made on the weekend of the 10th and excitement is building.

We have all heard the rumors and already know about titles such as Halo and Gear of War but there is something exciting about knowing that an announcement about them is imminent.

The supposed leak shows the following:

Now personally, I do not think that this is real as it uses a few announcements we already know about and has a lot of holes which include:

Overall, I do not put much stock in it but I am excited nonetheless…