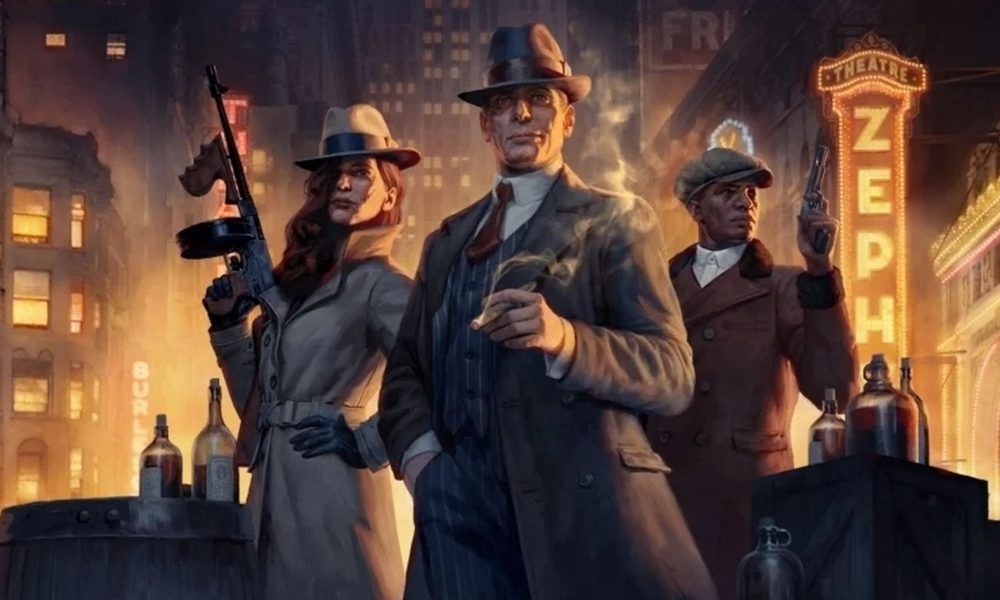 Empire of Sin has been a highly anticipated game since it was first announced back in June 2019. The brainchild of Brenda Romero and John Romero at Romero games, the game promised you a coming together of real-time strategy, turn-based action, and sophisticated relationship/diplomacy management akin to Civilisation and XCOM. The appointment of XCOM creative director Greg Foertsch firmly secured this in our wishlist. When you mix the BAFTA award-winning game director of Brenda, the genre-defining John Romero, and XCOM veteran Greg, we all expected something special. However, it’s worth noting that Romero Games are not a huge team so producing something this ambitious is quite extraordinary. 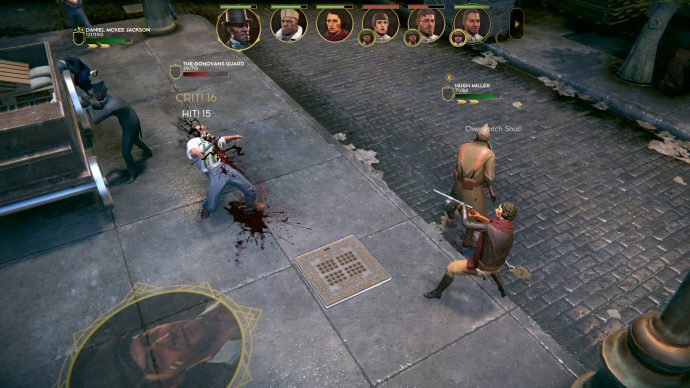 So What is Empire of Sin

Empire of Sin is a beautifully realized Mafia-building game in which you aim to become the king of Chicago’s underworld, using every conceivable means you can. The strategy element sees you micromanagement of your own underground empire whilst undertaking the intricacies of diplomacy. On the ground, you use turn-based tactics to capture buildings at gunpoint to establish direct control of neighborhoods. Ultimately, you need to build your alcohol empire through the creation of production centers, hideouts, clubs, and speakeasies. The twist here is that everyone knows everyone and this city and recent history between players can crop up and cause issues at the drop of a hat. 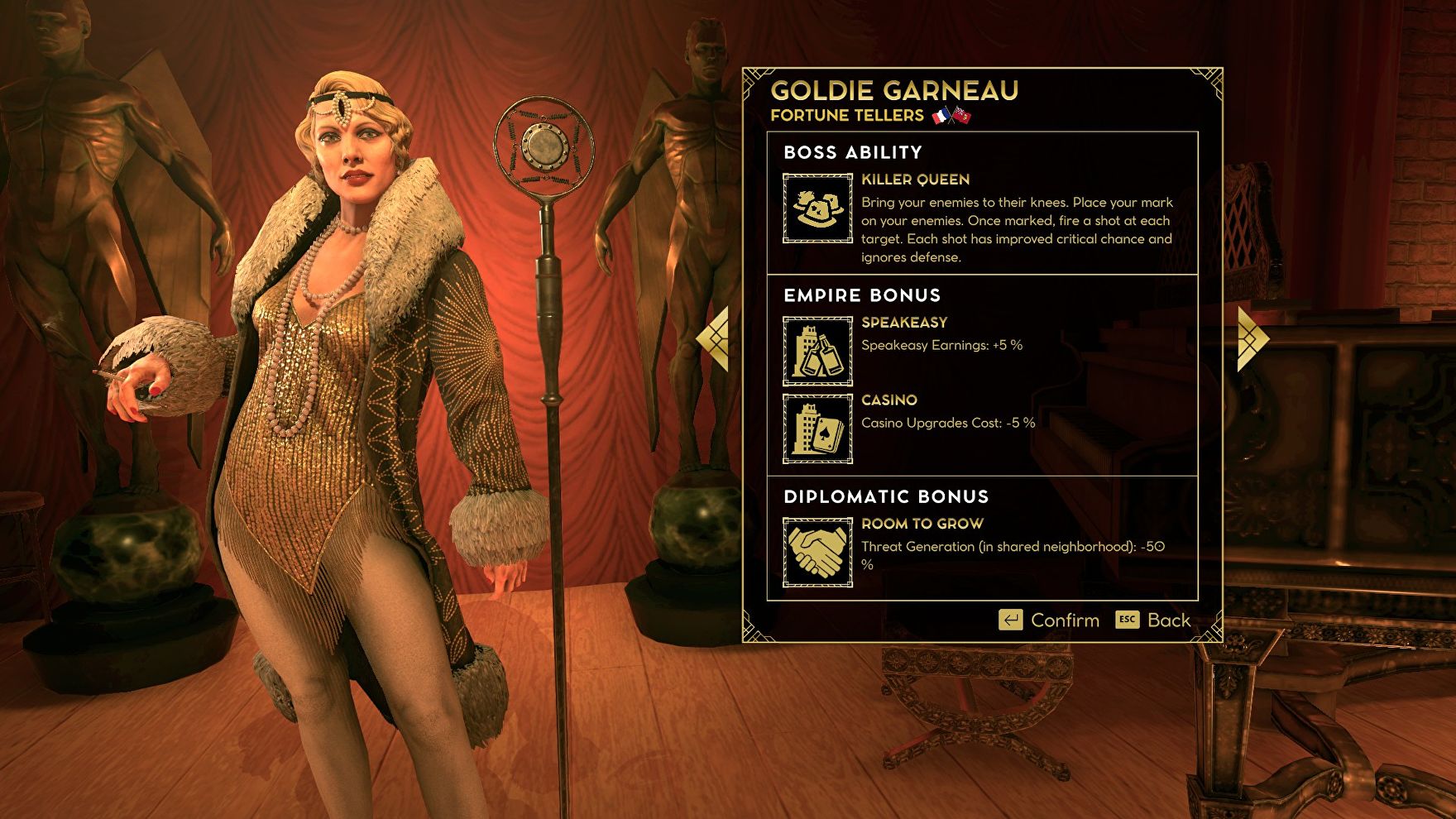 “Be careful who you call your friends. I’d rather have four quarters than one hundred pennies.” Al Capone

First of all, its great that players are not some generic gangster characters without a history, but one of 14 colorful characters. They are beautifully rendered and convincingly voiced. Some, like Al Capone, really existed and have had their characters exaggerated for the game, others are movie stereotypes or elaborations of historical figures. Each ‘gangster’ has four unique characteristics:

Each gangster has its own backstory and enjoys a dedicated campaign written exclusively for a particular character. For example, Goldie Garnier is a Frech-Speaking Canadian, but carefully hides this fact until one day, her cousin shows up and threatens to blackmail her. 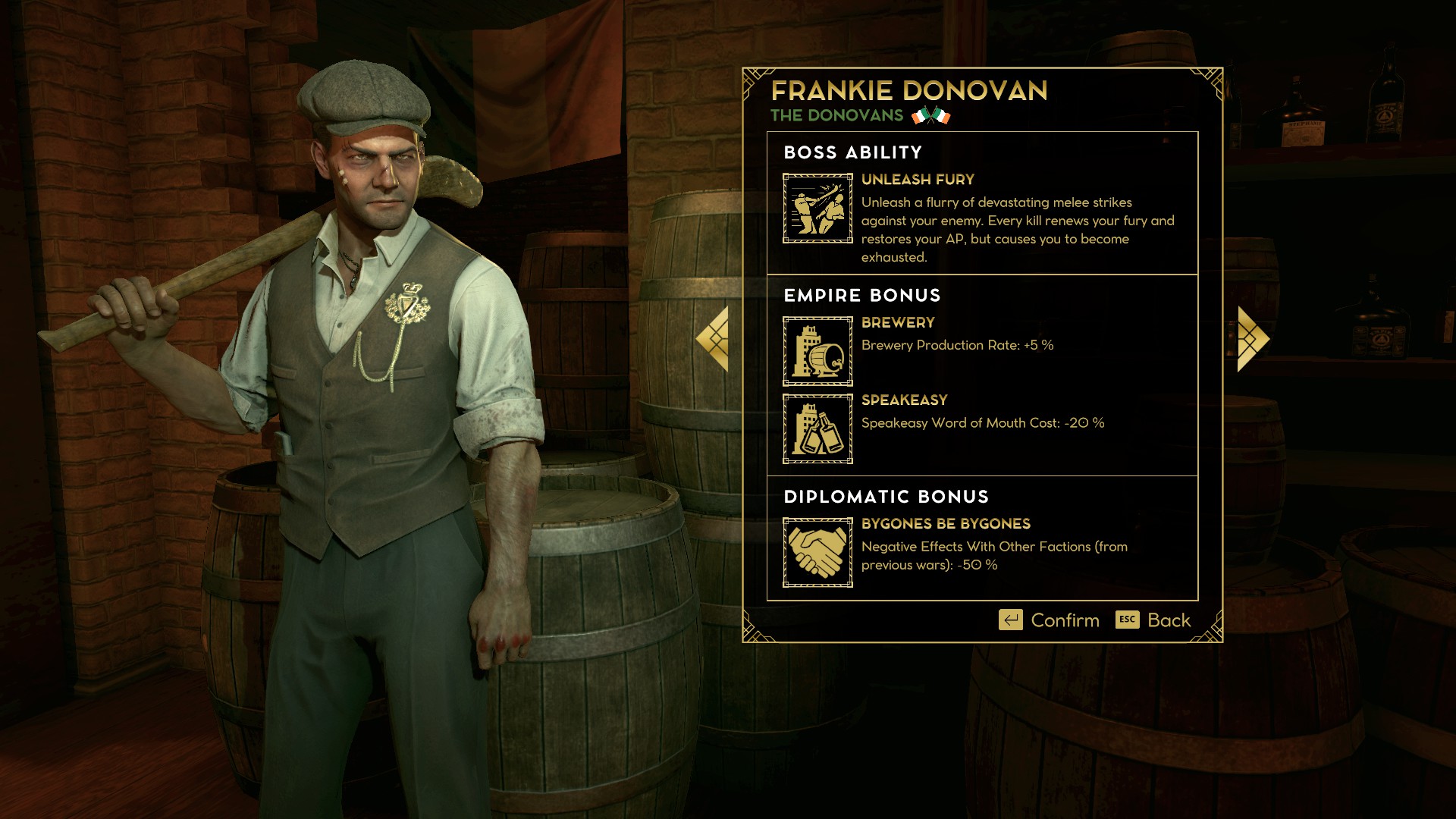 “Capitalism gives all of us a great opportunity if we seize it with both hands and hang on to it.” Al Capone

There are five levels of difficulty in Empire of Sin and players can choose between three to ten districts in the city. You will start alone, in your hideout and you’ll be competing with at least six different factions. As you take over additional buildings, your authority in the district increases so you can create casinos, bars, and distilleries to generate weekly income. However, if you are interested in legal gambling it’s better to check out the newest online casino rather than create your own gambling establishment where you’re unable to play casino games.

There are various types of buildings from near-empty buildings that hold a few thugs to enemy strongholds. Once owned, you can convert them into breweries, bars, brothels, casinos, or hotels. Alternatively, you can loot them and then tear them down so no one else can use them. However, almost every action costs money and there are issues in income if you place too many of the same building type in a small vicinity. 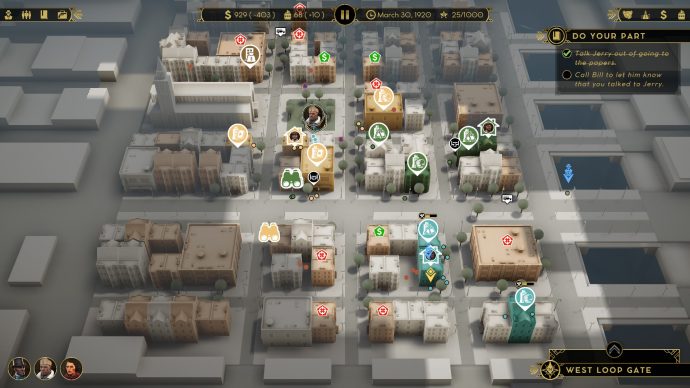 In brothels and bars, the atmosphere and word of mouth are important. In casinos, games are added: the more sophisticated the building, the more games it offers. In alcohol production, the speed of production, the quality of the goods produced, and the capacity of the warehouses are important, respectively. Also, all buildings, regardless of their purpose, have stats around security and detection. The better the security, the easier it is to fend off raids by other factions. Detection, on the other hand, is responsible for the likelihood of police raids. Each upgrade has several levels, and you have to pay for each one. Just like a mobster skill upgrade, improvements take a certain amount of time – unless you want to shell out extra money for the sake of instant results.

“Be careful who you call your friends. I’d rather have four quarters than one hundred pennies.” Al Capone

Being in the Mafia business means you need to have a crew. You can hire various Mafiosi in the game, but prices vary depending on their skill set and experience. There are various character classes to choose from and come in five variations:

When building your crew players may need to take note that some have pre-existing relationships leading to situations when snipers won’t kill ex-lovers or angry mob members leave fights due to prior connections. It’s a fascinating feature that adds an unexpected layer to the game. The fact that each character has his own personal story adds to the overall depth of the game. There are also bonuses to keeping a crew together as the longer they stay with you, the higher their morale and loyalty will be.

As for equipment, players can carry two guns, a melee weapon such as a knuckle duster or a bat, two additional items (such as a first-aid kit or grenades), body armor, and a personal knick-knack. 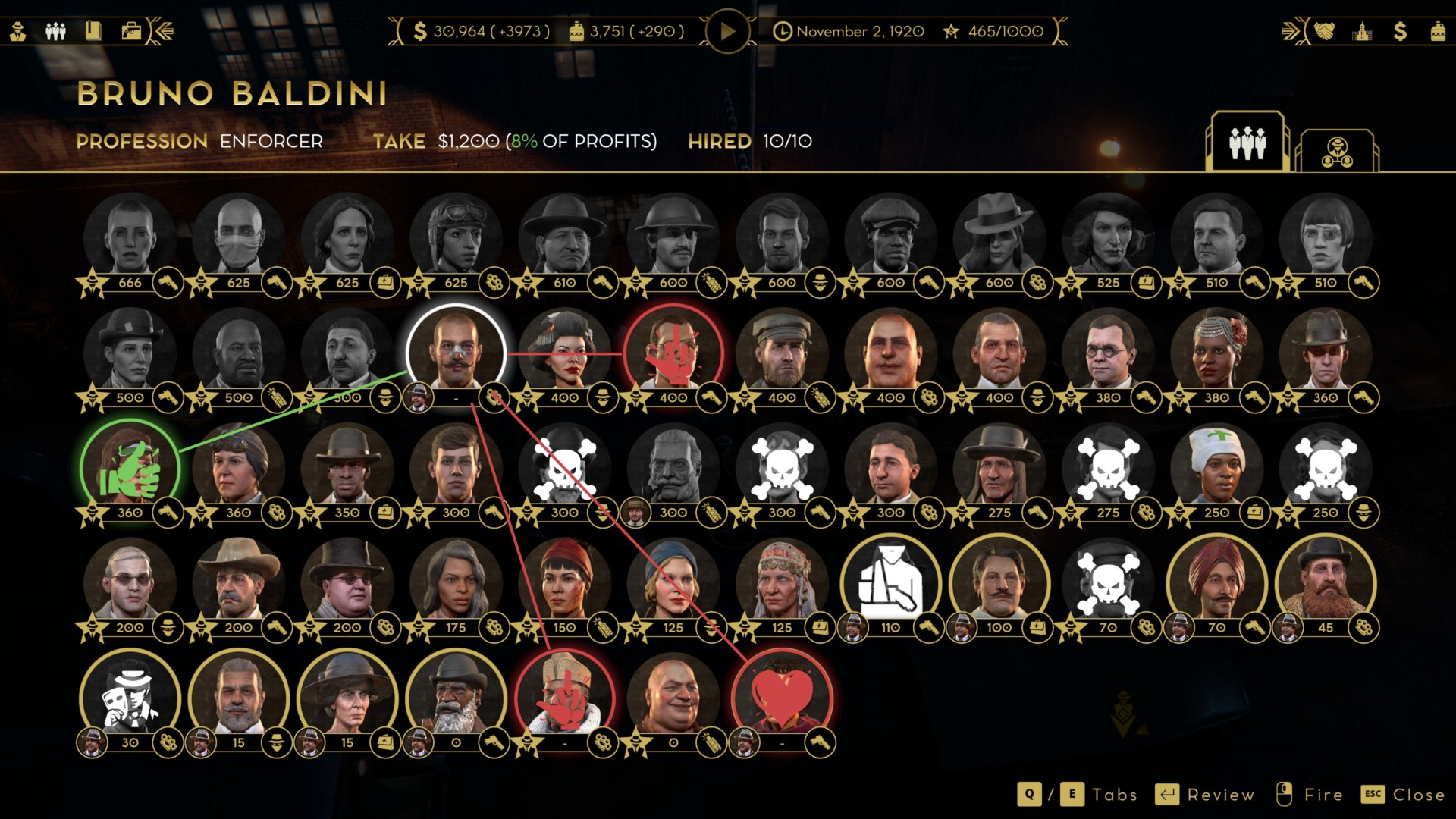 “The country wanted booze and I organized it. Why should I be called a public enemy?” Al Capone

There are a lot of statistics in Empire of Sin, which is expected when you have a threesome lovechild of Civilisation, Mafia, XCOM, and Phoenix Point, but in all honesty, many can be ignored if your end game is to complete the game. As the win condition is to simply kill the other mob bosses and take over, you can simply ignore many of the stats, fight your way into an enemy’s brewery, then cross the road to their hideout and put a bullet in the boss. But, where’s the fun in that. I’m sure the game will be expanded upon soon but you have to ask yourself if you want to win the game or play the game.

“In this life all that I have is my word and my balls and I do not break them for nobody.” Al Capone

Empire of Sin is a truly ambitious strategy game that isn’t without its flaws. It is really fun to play. But there are some bugs and balancing issues. Diplomacy is a really nice touch but is not fully explored, due to the fact you can’t win the game on diplomacy alone. However, the face-to-face conversations scenes are wonderfully voice-acted. The graphics are great and the overall ambiance of the city is fantastic. It is worth simply wandering the city just to take in the jazz and feel of 20’s Chicago. Gunfights are inconsistent at present but the roadmap of updates looks exciting. Empire of Sin is a truly unique game built on the shoulders of three amazing giants, so if you are happy to overlook the fact this isn’t a AAA production you will have a lot of fun.